The Garrison discotheque was a small two-storey building sandwiched between a chemist shop and a billiard parlour in High Street, Prahran (Melbourne). Thursday to Sunday nights it rocked through the early hours of the morning to the sounds of the best rock bands in Australia. Against strong opposition, the local council forced its closure in June 1973. Two albums were recorded over Garrison's last five nights - Wednesday 6th to Sunday 10th of June. The three groups featured on Unit (volume) 1 are "Ray Brown's One Ton Gypsy", "Madder Lake", and the group "Friends," who would later be known as "Ayers Rock". Friends contributed two songs, an early version of "Lady Montego" (as featured on Big Red Rock) and "Freedom Train", with it's incredibly long break / solo by drummer Mark Kennedy. "Boy You Shot Me Down" by Ray Brown is also worth a listen. Unit (volume) 2 is worth grabbing for the collection, but Unit 1 is the better complilation. 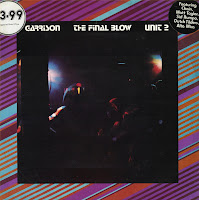 This four-piece version of Friends only lasted until the middle of the year. In early June 1973 they were one of the groups that played at the closing nights of the Garrison venue in Melbourne and the group folded soon after the Garrison farewell, with Burton Kennedy and McGuire all leaving to form their eponymous trio, which evolved into the original lineup of Ayers Rock, who re-recorded "Lady Montego" on their debut album.
This is a unique, live Australian rock'n'roll album that is certain to stand the test of time. Garrison has gone but because of this album the music will last forever - we had the final blow.
I've split the downloads into two (in case you have one or the other), rips were taken from a Vinyl pressing at a 320kbs and includes Album Artwork (sourced from Midoztouch with thanks)