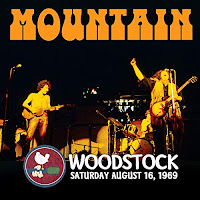 Bob Dylan once said that the ‘60s reminded him of a flying saucer landing – everybody heard about it, but only a handful ever saw it. Out of that handful who saw the decade up close, few had the view of the musicians who played the 1969 Woodstock Festival. The festival, long since pinned like a museum butterfly under history’s glass, misfired for some and cemented the reputations of others. The performance of Crosby, Stills & Nash marked only their second public appearance. Other bands such as The Grateful Dead still talk about how dissatisfied they were with their performance, while the great Alvin Lee and Ten Years After enjoyed, particularly after the concert film’s release, a considerable boost in popularity. Most famously, Jimi Hendrix’s rendition of “The Star-Spangled Banner” filled more pages in the guitar great’s growing legend and lingers in public consciousness as the event’s defining moment.

Treading the boards in Max Yasgur’s field transformed Mountain’s career as well. The band’s close to classic lineup, minus soon-to-be-enlisted drummer Corky Laing with ND Smart still on drums, ripped through a set largely culled from guitarist Leslie West’s recently released solo album entitled “Mountain.” The wide-eyed, expressive and impressively built West manned center stage as if the fates conspired to place him there at that moment and time, while former Cream producer Felix Pappalardi stood semi-shadowed to his right unleashing furious bass runs in accompaniment. It is little stretch to say the massive crowd heard nothing quite like this before.

It wasn’t the overpowering bluster or blues histrionics of West’s guitar. By 1969, Cream and the Jimi Hendrix Experience spawned a host of imitators and influenced countless others to carry on their groundbreaking work to its logical conclusion. However, the public had yet to hear a guitarist capable of uniting accessibility, melody, power, fluent vibrato, and strong rhythm playing into one package. His imposing frame juxtaposed against the small size of his Les Paul Junior along with his surprisingly soulful and muscular vocals completed the picture. His torrid performances on “Beside the Sea” and “Southbound Train” impressed many and didn’t go unnoticed by record executives.
[By Jason Hillenburg for Goldmine Magazine, April 25, 2017]

Leslie West reminisces about Woodstock in an Interview with Rolling Stone:

Woodstock Remembered: Mountain Guitarist Leslie West on Playing the Fest
“When we flew over in the helicopter, it felt like something out of Close Encounters of the Third Kind“

Woodstock was just our third job, and it was quite a thrill. Mountain got on the show because our booking agent also handled Jimi Hendrix. I remember watching Creedence, Sly and the Family Stone, the Who. And I was thinking, “How can I top that?” It was one good band after another. It was a thrill, I’ll tell you.

We hired our own helicopter ’cause we had heard that it would be chaos getting up there. When we flew over in the helicopter, it felt like something out of Close Encounters of the Third Kind. There was a first-aid kit, and I opened it up and took out an amyl nitrite popper. I looked out at that crowd, and I almost fell out of the helicopter.

I think I had the most amplifiers of anybody there. It was paralyzing because that stage, that setting, was some kind of natural amphitheatre. The sound was so loud and shocking that I got scared. But once I started playing, I just kept going because I was afraid to stop.

There were bagels backstage, and they were going real quick. I remember that distinctly because our manager brought these barbecued chickens up in the helicopter — his wife had told him he’d better bring something to eat, and we were the only ones with food. Well, with all the smoke that was there, the appetites were crazy, and there was absolutely nothing to eat. We could have probably sold those chickens for like five grand apiece. [extract from rollingstone.com] 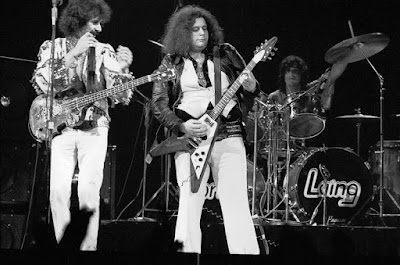 This post consists of MP3's (320kps) (sourced on the web some time ago) and includes Mountain's full Woodstock setlist.   Limited artwork is also included along with select photos, with alternative front cover shown below.  As was for many of the bands who played Woodstock, Mountain owed their big break to the performance they made at this iconic festival.  In fact, they even subtitled one of their tracks in recognition to the festival's host, Max Yasgur.
.
Tracklist 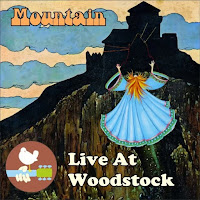