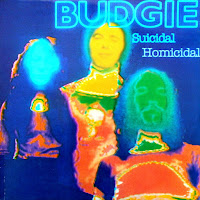 This German compilation, released by Cube Records in 1985 was originally released under the title of 'Best Of Budgie' in the UK in 1981. Both featuring the same track listing, all tracks are taken from Budgie's first two LP's ('Selftitled' and 'Squawk'). Of course, we all know that their third LP "Never Turn Your Back On Your Friends' was their swan song LP, but for some reason Cube Records ignored this and decided to focus on their first two LPs, referring to it as Pre-flight Budgie.

Never the less, this compilation still presents a 'nest' full of Budgie classics which highlight some of their best riffs, in particular one of my favourites "Homicidal Suicidal" and a band favourite "Guts" which they still play live today at their gigs. The only concern I have with this album is why Cube records decided to give the LP the reverse title 'Suicidal Homicidal'. I wonder if it was a 'lost in translation' error rather than intentional, being a German release?
Irrespective, a special highlight of this album are the liner notes (written by their producer Roger Bain) on the back cover. They go something like this.....

Pre-flight Budgie - an album containing the best, ie. the heaviest tracks from the first two seminal albums by this Welsh band.

I first saw Budgie when Kingsley Ward the mastermind behind Rockfield Studios, arranged  for Burke and the lads to audition in his studio. I had just completed some heavy recording sessions with 'The Earth Blues Band' who were later to change their name to 'Black Sabbath', and Kingsley thought I would be interested in hearing the Welsh answer to 'The Birmingham Bashers'. Kingsley was quite right, I was.

Apparently, the band had never met a "Record Producer" before, and expected me to arrive in a white Rolls Royce, smoking a foot long cigar and wearing a nine carat gold knuckle duster! When they were told that their roadies had to meet me off the train at Glouchester station, they were quite relieved. I knew straight away I wanted to work with this band, and we agreed there and then to record the first album, despite the fact that it was now the middle of winter and the snow lay two feet deep around the Welsh studio. Every playback was preceded by a fight for the best place in front of the parrafin stove, in fact Burke wore wooflen gloves for most of the takes (so that is the secret of his heavy bass sound!) and those 'cordon bleu' trained roadies - I have never tasted baked beans on toast like that before! (what a glamorous life it is in show business).

The personnel on these sessions reads as follows:
Burke Shelley - Bass Guitar & Vocals (studying to perfect a method of keeping his glasses on while poncing around on stage),
Tony Bourge - Lead Guitar, which he had stuffed with old newspapers in order to reduced feedback from his amp (you should have taken the fish and chips out of the newspaper first Tony!)
Ray Phillips - Drums   (An expert at a hundred miles per hour without recourse to unnatural substances) 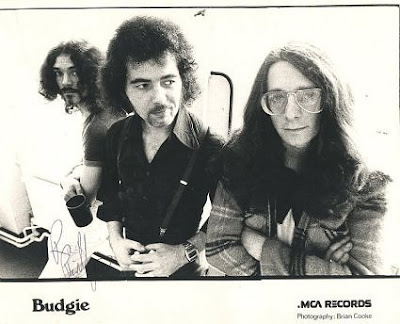 And of course, Tom Allom, whizz engineer, who despite his constant complaining about ice in the loo, and double portions of baked beans for breakfast, went on to success as producer of 'Judas Priest' and 'The Tourists'! 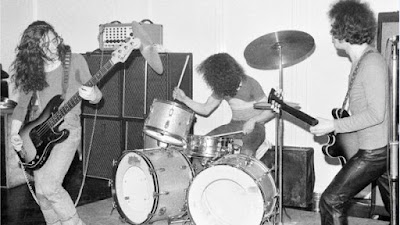 We had fun recording these albums, and having been allowed to combine the best tracks, I feel that all dedicated Budgie fans (God help them!) will be in seventh heaven (that's just outside Cardiff you know) when they get this piece of recorded history onto their turntables. Roger Bain 1980
(Ten years after the event, and I still wake up screaming.)
. 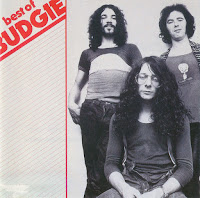 This post consists of FLACs ripped from my vinyl and includes full album artwork and label scans.
Although I'm sure most Budgie fans will probably have these tracks already in one form or another, if not the earlier 'Best Of Album' from 1981 (see left), but like any typical record collector, one's collection is never complete without those numerous compilations that record companies release to squeeze every cent they can from their artists. Budgie is no exception, so grab this one before it literally Flies Away!
.
Track List 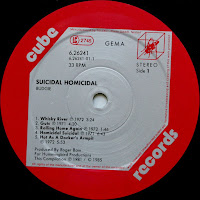