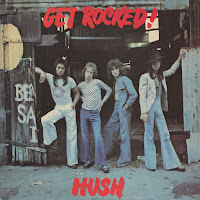 History doesn't always show the full story, and this is certainly the case with Hush. The band had it's beginnings in 1970 and continued in various forms until the end of the 70s, with 1975 being their most successful time.  Their biggest hit was Bony Moronie, an energetic cover of the Larry Williams US hit from eighteen years earlier, and it was the one of the ten best selling singles in Australia during that year.
No mean feat when you consider that Hush were competing for chart space with the likes of ABBA and The Bay City Rollers, plus the local dynamic duo of Sherbet and Skyhooks, the only Australian acts to do better than the this Sydney based quartet.

Lead singer and founder Keith Lamb was a charismatic front man, demanding attention from his audiences, and Hush were nothing like any of the other home grown rock bands. They were rockers, no doubt, but they had their own persona. Hush is probably the closest Australia ever got to having its own glam rock band.

For several years the band decked themselves in tight fitting satin pants (flares of course!) and shirts, scarfs and sequins, and the tallest platform shoes, looking like they had just done a stint backing David Bowie or Gary Glitter, but the sound was pure rock and roll. 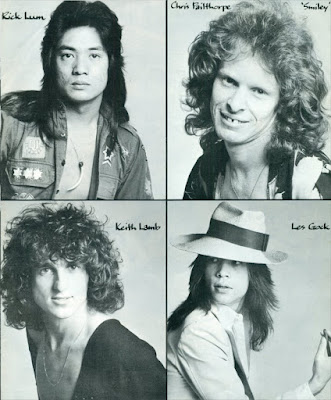 Across a chart career spanning five years they scored ten Top 100 singles, all of which are included here, and six Top 100 albums. By 1978 the band had split up. Whether it was the fact that the group could not endure another line up change, or that their biggest hits were cover versions (Bony Moronie was followed into the Top 10 in 1975 by their creditable version of Dave Clark Five's Glad All Over), the spark of Hush had disappeared. Keith Lamb continued to front bands for a few more years (the Keith Lamb Band and Airport were two of them) and lead guitarist Les Gock has set up a successful production company.

As one of their songs states, nothing stays the same forever, but what remains are fine examples of good time Australian rock and roll songs from the music scene of the 70s, which was always exciting and interesting. 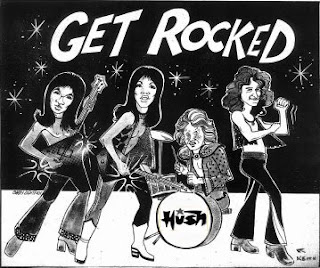 It is interesting to note that their debut album was a live album entitled 'Aloud 'N' Alive', recorded in front of a few 100 hand picked fans in a Sydney studio.  They released their first 2 studio albums in succession in 1974, 'Get Rocked' and 'C'Mon We're Taking Over', both big sellers of the time. Their #1 single "Bony Moronie" appeared on their 1975 album 'Rough Tough 'N' Ready' and gained solid airplay and high chart positions in state after state and ended up selling over 50,000 copies. 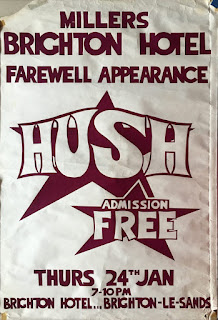 In a recent interview with Les Gock for 'The Clothesline', Les reminisces the early days of Hush...

“One of the last times Hush played in Adelaide, talking about 1975,” Les recalls, “one of the support bands we had was The Keystone Angels, who were a Jug band. And we thought, ‘This is all wrong. What are these guys doing as our support act?” Go figure! And it was after that in the dressing room that Doc and the Brewster Bros came in and said, ‘Man, that show was great! We’ve gotta get big amps like that! We’ve gotta play rock and roll!” And lo and behold a couple of years later, there emerges The Angels.

“There are a lot of stories around Hush’s earlier days, for instance we supported (Status) Quo. It was Quo’s very first tour of Australia; no one had seen them. And as soon as we saw them we thought ‘oh my god that is exactly what we want!’ So, if you were a musicologist you would sort of go through and see the influences on Hush from Quo, AC/DC, The Angels, Rose Tattoo – a whole swag of Oz Rock from that era.

“One of the other tours we did was with the Jackson 5. We hadn’t even had a hit at the time and we’d just finished recording our first single "Get That Feeling", and the Jacksons were really like a club act kind of thing – Michael Jackson was incredible!” he adds. “I remember he was fourteen and came into the dressing room and we said ‘Hey, kid! How’re you going?’ You know it was like ‘whatever’, and he was very respectful, very nice. He asked us about one of the songs that we did, so that was cool! It was our first single and we had only just recorded it and played it for the first time at the Hordern Pavilion. It later went top ten in Sydney. [theclothesline.com.au] 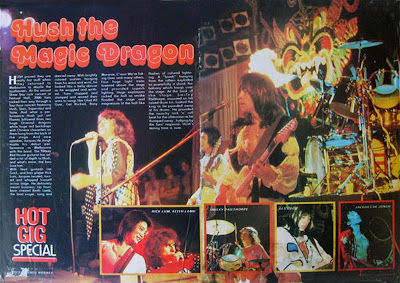 .A Little Bit Of Hush Please
(Interview with Hush - Go Set Magazine April 13th, 1974)
The album! That is definitely uppermost on Les's mind and he proceeds with a run-down of each track:
"It starts with the title track, "Get Rocked", combined with the Stones' "Satisfaction" — which, incidentally, is the only song we didn't write on the album. "Get Rocked" is a love song. We had the title and we just wrote the song around it. From the reaction it gets on stage, we knew it was a good song and, on the album, it sounds very funky and sexual." 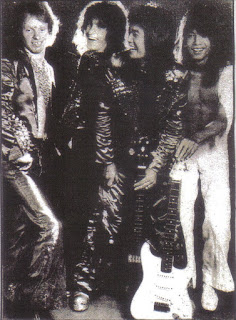 Peter Rix had mentioned earlier that the boys opened their new stage act with the Theme from 'Enter the Dragon', going into a song called "Nanchunka Man". Les said it was a personal favourite of the group:
"It starts with a fantastic bass run through a wah-wah pedal, some freaky guitar effects and a sudden, terrifying scream from Rick. For those who don't know what 'Nanchunka' means, it is a Kung -Fu weapon made of wood and wielded about on a chain. The song is about an old Chinese legend concerning a Chinese Robin Hood how steals from the rich and gives to the poor. One day he meets the Emperor and there's a sad ending.

"One song that will surprise people who dig Hush and want to see what they can do with a beautiful ballad is 'South Coast Standards'. It's about our band, but it could easily apply to most groups. You know, trying to get a record played and getting down. People used to say about us 'who are these idiots?' but we stuck to our guns and we're doing okay now.
"We wrote the song after doing our third gig in one day.  The audience were a bit a cool and we had to work really hard to win them over, despite our exhaustion. It was a minor achievement for us, but it's a constant battle all the time, so we wrote the song on the way home. We used strings on the track and there's a lovely piano passage. 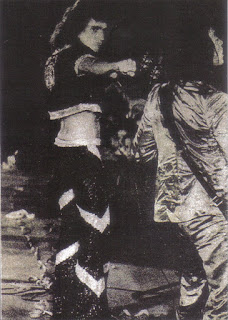 "Of course, there are the Hush smash-grabbers,, like 'Mind-Rocker' which is in the best Hush tradition. It blasts from start to finish and is guaranteed to turn the oldies off."
Prior to doing an album. Hush spent two glorious weeks on the 'Fedor Shalyapin' — a Russian ship — and it was inevitable the cruise would inspire at least one track:
"We were so relaxed and happy on the ship", said Les, "and one song that captures the serenity is 'Rocking the Boat' which has a Jamaican feel."

"What about 'Francis Rainbow' prompted Keith who, as it turns out, represents the fair young lady in the new stage act. With the new album, Hush have devised a new stage act in which each member represents one of the songs. Rick has designed the outfits and Smiley is spending what precious little spare time they have, at the sewing-machine. Rick is 'Get Rocked', Smiley is 'Mind-Rocker', Les is 'Nanchunka Man' and Keith; 'Francis Rainbow'.
Continued Les: "There actually is a girl called 'Francis Rainbow. It's such a beautiful name and the song represents three different aspects of her personality, the fictional character, not the real life one", he added. "For instance, one part is very dream-like and another is sinful black when she becomes a prostitute. 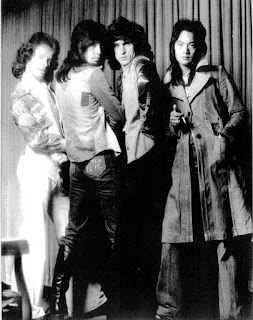 "What else is there? A strange little song called 'Riff in my Head' which is about walking up one morning with a riff in my head and just going back to sleep. "A more complicated one is 'Raven the Dark' about an Alvin Purple-type character who can't help attracting women. Ernie Rose said the rhythm is so complex, he doesn't know anyone else who could play it. It really shows the sympathy the four members of Hush have for each other. We put it down in one take and Ernie couldn't believe it, so he asked us to do it again and it was just as exact the second time.
'On the other hand, it took about a zillion takes before we achieved the right feel on a sons called The Exit'. It's a syncopated type of song and Ernie really helped us with that one."
Keith commented that he has never sung like he did on that particular track: "Because I was saving my voice, I sang along quietly and sort of weirdly when the guys were putting down the rhythm track, but it so perfectly matched the feeling of the song that we kept it that way."
Back to Les: "You go to dances and find kids bashing each other up because they have no outlet. The song is about a guy who is trying to find the exit."

Phew! It didn't take long for Hush to come up with an interesting, original album and this is not going on their own enthusiastic raves. Literally everyone who has heard "Get Rocked" is amazed that this is the latest offering from "the heavy metal kids'as reviewer. A.8. Guest, so affectionately and aptly described Hush.
Their magic is spreading rapidly. In Melbourne, they won the hearts of thousands, including, it would seem, the entire female population of the Frankston High. "Lovely girls", said Keith. "Melbourne was a real eye-opener for us. We finally discovered the true meaning of a massage parlour!"
When Les says "why do I write such filthy lyrics?" one can only imagine Keith must be one source of inspiration. 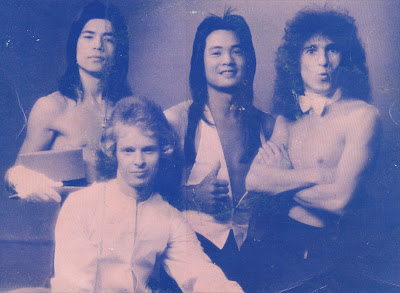 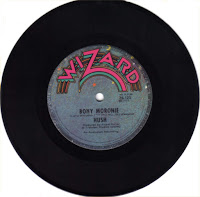 It was time to say goodbye once more. Hush are in the middle of an Australian tour and they headed for Brisbane at 9 am the next day. After the tour following the release of the album, the band hope to break into the Japanese market. Let's face it. With their sense humour, talent and determination they could break into the Bank Of England.
.
This post consists of FLACS ripped from my Wizard vinyl and includes full album artwork and all photos displayed above. As a bonus, I have included their promotional single "Get Flaired" for Colonial Jeans and their #1 hit single "Bony Moronie" (both of which were ripped from my prized 45's in FLAC for the first time).
So get ya flairs out of storage folks and be prepared for some crutch wrenching riffs. And if ya don't, then you can just go and Get Rocked! 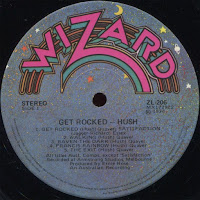 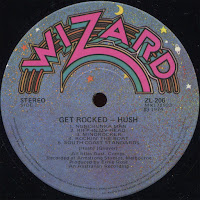