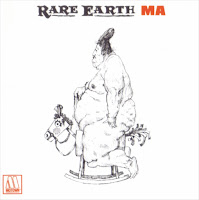 Rare Earth began as an R&B band called the Sunliners in Detroit in 1961. Of the musicians who would be part of the band dubbed Rare Earth, only sax player Gil Bridges and drummer Pete Rivera were present. John Parrish joined on bass in 1962. Rod Richards became a guitarist with the group in 1966. Keyboardist Kenny James came into the fold the same year. After years of doing the club circuit, the group changed their name to Rare Earth and released Dreams/Answers on Verve. The album received little reaction and the group was picked up by Motown Records as the first act on their yet-to-be-named new label. Rare Earth suggested to Motown that the label name their new subsidiary after the band and Rare Earth Records was born.

When they set out to record their first album, they essentially ran out of material and did a 21-minute rendition of the Temptations' "Get Ready" to fill out the space. The album was making no headway on the charts for a long period of time. So they took the first three minutes of "Get Ready," released it as a single and it made its way into the U.S. Top Ten list, peaking at number four. Pulled along by the success of the single, the album also began to sell, breaking the Top 20, and Rare Earth's career was officially on its way. The second album, 'Ecology', was released in June of 1970, a couple months short of a year after "Get Ready" had been put out. Interestingly enough, Ecology was not really the group's second album, but their third. An album entitled 'Generation' was recorded as the soundtrack to the film of the same name. When the film stalled at the box office, the album was shelved. Still, 'Ecology' would yield not one, but two hit singles. The first was "(I Know) I'm Losing You" (another Temptations cover), which also broke the Top Ten. The second single, "Born to Wander," did not fare quite so well, but did make the Top 20. The album was catapulted to #15.

Not wanting to lose momentum, 'One World' followed almost exactly a year after 'Ecology', and yielded another hit single in a longtime classic, "I Just Want to Celebrate." The song peaked on the pop charts at number seven and the album broke the Top 50. They released a live album in December of the same year. For the next album, 'Willie Remembers', the group insisted on doing all originals, a move that was not common around the Motown camp. Unfortunately, for a band trying to prove a point, the album never reached the type of sales of previous records. Indeed, it stalled out at number 90, and the single "Good Time Sally" didn't even break the Top 50.

Motown tightened the creative grip on the group and original producer Norman Whitfield, who had worked with the group on earlier albums, was brought in to save the day. The resulting album, 'Ma', (featured here) was released in May of 1973 and fared just a little better than 'Willie Remembers', peaking at #65. The label was not pleased and sent the group into the studio to record with Stevie Wonder. That pairing did not really gel, though, and only two tracks were recorded, neither of which were released. Instead, the label sought to release another live album, trying to regain the spark that Rare Earth had had. That project also fell by the wayside, though.

What followed was a series of lineup changes and legal battles, and the group stopped touring altogether in 1974. The following year Rare Earth, in a new lineup, released 'Back to Earth'. The album did a bit better than the previous one, reaching #59 on the charts. The single, appropriately entitled "It Makes You Happy (But It Ain't Gonna Last Too Long)" stalled just outside the Top 100. A disco-oriented excursion entitled 'Midnight Lady' was released in 1976, but failed to really go anywhere. To make matters worse, Rare Earth Records was discontinued altogether. The band had broken up by this time.

As fate would have it, though, this was not the end of Rare Earth. Instead, Barney Ales, who had presided over Rare Earth Records, started his own label Prodigal Records. He talked the group into reuniting to record the label debut. The resulting album, 'Rare Earth', was released in 1977 and made no real waves in the music business. Rare Earth got things together again for a marathon recording session the following year. That session yielded not one, but two albums. The first was 'Band Together', released in April of 1978, with 'Grand Slam' following in September. Neither of those albums every really took off, either. The group essentially broke up in 1978, although a version of the original lineup was touring all the way into 1983. A different incarnation of the group, with just two original members, still makes the circuits. [ extract from 60-70rock.blogspot.com] 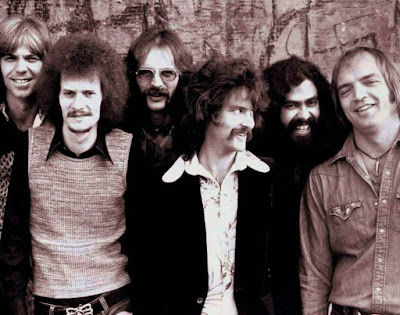 .Album Review
One of the first white bands signed to Motown, Detroit’s Rare Earth had a damn good run in the late ’60s and early ’70s. Those were peak times for psychedelic soul and R&B in general, and Rare Earth seriously benefited from Motown’s largesse (they even got their own imprint, also called Rare Earth). Oddly, though, Motown boss Berry Gordy often ordered Rare Earth to perform the same Norman Whitfield/Barrett Strong compositions that the Temptations and/or Undisputed Truth recorded. The reasoning being, if one of them didn’t hit, well, maybe the other act would, as if each had their own distinct fan bases. As a fan of all three groups, I can’t discern great differences from their respective versions of those stone classic Whitfield/Strong numbers, but I’m of the persuasion to hear ’em all. That’s how strong my love is for that writing team. 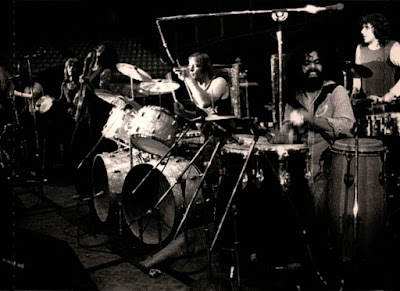 Anyway, Rare Earth’s sixth album, 'Ma', consists of all Whitfield material, with Strong earning co-writing credits on “Smiling Faces Sometimes” and “Hum Along And Dance” (the Jackson 5 also covered the latter). Both are incredible jams that you have to go out of your way to mess up, and Rare Earth execute them like the slick professionals they are. Singing drummer Peter Hoorelbeke (aka Rivera) might be the funkiest, most soulful Caucasian dude to hold down those two tasks simultaneously. (I’m willing to be proved wrong, if you have counter examples.) 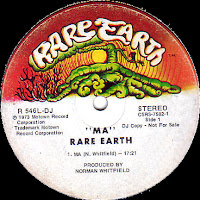 Talk about balls, though: “Ma” starts the LP with a 17-minute tour de force of stoic, stolid funk and an inspirational tale about a strong, generous mother who raised 13 children, against the odds, and was “stronger than any two men.” Ray Monette lets off some strafing guitar solos and Mark Olson adds percussive, striding piano that ratchets up the drama. As with other Whitfield epics, “Ma” accrues momentum and momentousness as it goes. The man was a songwriting god, and this is yet another masterpiece in his canon.

“Big John Is My Name” is your basic marauding, boastful party-funk anthem, with drum breaks ripe for the sampling, although whosampled.com shockingly reveals that nobody’s done so. That’s just crazy. The Rare Earth rendition of “Smiling Faces Sometimes” differs from Undisputed Truth’s and the Temptations’ in that it’s more rock-oriented and laced with flamboyant keyboard embellishments. It’s probably my least favorite of the three, but it still bears some wicked wah-wah guitar punctuation, and it’s by no means a dud. 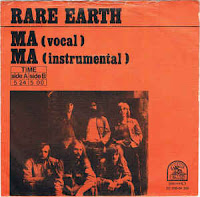 For “Hum Along And Dance,” Rare Earth again bring more rock energy—think the Rolling Stones circa “Can You Hear Me Knocking”—to this intense dance cut than do the J5 or the Tempts. Michael Urso kills it on bass, and there’s clenched-fist excitement from start to finish. “Come With Me” bears an acoustic guitar part that paraphrases the Beatles’ “Eleanor Rigby,” which Rare Earth covered on 1970’s Ecology. It also boast plenty of female groans, a Santana-esque shuffle, and an expressive guitar solo. It’s a mellow denouement to a record that mostly funks festively or furrows brows with earnest platitudes about guarding against deceptiveness and honouring single mothers.

Ma might be the last great Rare Earth album, and I recommend it to anyone who worships Norman Whitfield and Barrett Strong—which means all right-thinking people, to be completely honest. -Buckley Mayfield [extract from jivetimerecords.com]

This post is super 'funky' and consists of FLACs ripped from my newly acquired CD. It also includes artwork for both Vinyl and CD releases.  I gotta say I never tier from listening to the title track - it has such a catchy beat/melody and the lyrics are both simple and memorable.  The B-Side doesn't quite reach the same level of ecstasy but it's four shorter tracks still help to make this a strong album. It is a shame that their record company didn't feel the same way when the album was first released.
As a bonus, I have sourced the single edit release of "Ma" and included it as a bonus track.  Enjoy.
. 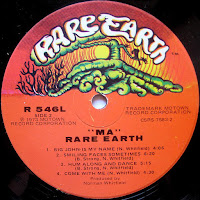