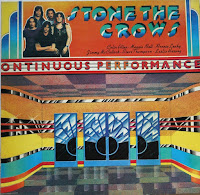 Stone The Crows began out of Glasgow, Scotland, when a young Maggie Bell got up on stage to sing with Alex Harvey (Sensational Alex Harvey Band) and got £2 for her cheek. Harvey introduced her to his younger brother Leslie, then leading Kinning Park Ramblers.

Maggie later joined Les Harvey in band called Power which toured clubs and U.S. bases in Germany and was discovered and renamed Stone The Crows (line-up as above) by Peter Grant (Led Zeppelin).
Their first two albums, both released in 1970, were notable for tight, soul-based sound, Harvey's superb guitar work and Maggie's gut-bucket singing. However, public acclaim wasn't arriving as fast as was hoped, and McGinnis and Dewar quit in February 1971 to join Robin Trower's new band. The group were near to breaking up when Ronnie Leahy (keyboards) and Steve Thompson (bass) came in as replacements. Teenage Licks (1971) produced strong upsurge in group's fortunes, Maggie Bell winning first of many  awards as Britain's Top Girl Singer in 1972. 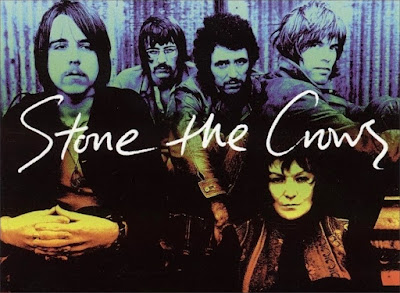 But, in same year, came tragic death of Les Harvey, killed on stage by a "live" microphone during gig at Swansea University. They attempted to carry on with Jimmy McCulloch (from Thunderclap Newman) as new guitarist-but the writing was on the wall. 'Ontinuous Performance', already half-completed, was finished by the new line-up and released to critical acclaim. But still there was no commercial success to sustain them, and in June 1973 the band broke up. 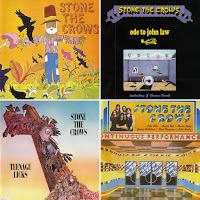 After Stone The Crows split up, Maggie established herself as a successful solo artist and recorded two stunning albums “Queen Of The Night” and “Suicide Sal” with a host of star studded supporting musicians including Jimmy Page, Phil May and Geoff Whitehorn.; while McCulloch joined Wings and Long-­serving drummer Colin Allen went on to play with Focus and John Mayall.
[extract from The Illustrated New Musical Express Encyclopedia of Rock, by Nick Logan & Bob Woffinden, 1977. p225-226]
.
Album Review
(by P.F. O'Dea. Victoria University of Wellington Library)
The first indication that Stone the Crows could be set apart from average purveyors of heavy rock came with the release of their first album. The first side was a collection of competently-performed white blues, good but not exceptional. "I saw America", which occupied the entire other side with its impressionistic collage of an outsiders view of American Society, served notice that here was a group capable of bigger and better things.

The promise displayed on that first album was not, unfortunately, extended to its successor "Ode to John Law", and by any standards, the third album, "Teenage Licks", was a retrogression. Still the three albums contained just enough ideas to tantalise, and this together with the reputation the group enjoys as one of the most potent and memorable live acts on the English circuit, nurtured the hope that one of these days Stone The Crows would produce a real shit kicker. "Continuous Performance" isn't quite it, but it's two steps on the way. It has to be seen as a transitional album, following the death of their lead guitarist, Les Harvey, who electrocuted himself at a college gig, and to whom "Continuous Performance" is dedicated.

Harvey plays on five of the tracks, but his former overpowering approach has been mellowed by the bringing forward of pianist Ronnie Leahy, resulting in more balance over which Bell's voice even out-Joplins Janis. The opener, "On the Highway", highlights the group's tendency towards the excessive, and should have been compressed.


"Penicillin Blues", a not-so-sublime sexual metaphor written by bluesmen Sonny Terry and Brownie Magee, has Harvey sympathetically counterpointing Bell's amazing gymnastics : "I promise not to scream or wriggle / I want it to last all night long", becomes more obvious and orgasmic as the lyric progresses.

Harvey's replacement Jimmy McCulloch, turns in creditable performances on two numbers, "Sunset Cowboy" and "Good Time Girl". During the latter his runs blend well with the pulsing undercurrents laid down by Colin Allen and Sieve Thompson, and the punchy brass work. McCul-lock should eventually fill the gap left by Harvey's demise, and lighten the group's approach.
Maggie Bell's finest moments to date are "Niagra", a ditty about selling one's soul to the devil and throwing rocks at policemen, and "Sunset Cowboy", an emotion charged, gospel-tinged tribute to Harvey.

One minor niggle : In their usual ham-fisted manner, Phonogram Records have mutilated what was originally a fold-out cover, removing the capital "C" from the title, so look for "Ontinuous Performance", The mistake is repeated on the label, but rectified in the small print on the spine. It's really nice to see a company take such an obvious pride in presenting its product to the public (NOT)
.
Harvey's Death and it's Impact on the Band
The band were dealt a massive blow on May 3, 1972. Les Harvey was electrocuted onstage at the Swansea Top Rank and died. "You can imagine what it did to us to see Leslie die." recalls Bell, still shaken by the memory. We were all there when it happened". The band elected to try and carry on. ("I don't remember any vibe about splitting up after that happened,' remarks Allen.. ''I believe we all thought that Leslie would have wanted us to continue"). And the man who seemed lined up to step in for Harvey was none other Fleetwood Mac's Peter Green.

'We were rehearsing at Ronnie Leahy's house, in the basement," explains Bell. "Peter had agreed to join us for a festival appearance (Friar Festival) we were committed to doing. I recall going to pick him up. and he'd cut all his hair off and had a sleeping bag and haversack slung over his shoulder. He was almost unrecognisable from the person we all knew. But we spent three weeks rehearsing with him for the festival slot. Then on the day before the gig, he called us up and said he couldn't do it. There was no explanation, he just pulled out." 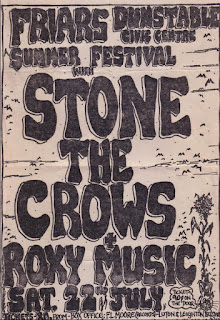 I suppose in reality - Peter was light years away from joining us,' alleges Allen. "He was such a space cadet in those days. We were very excited by the possibility of him joining - he was playing really well, but I think he came along to rehearse just for something to do"
Faced with this crisis, the band turned to an old friend to help them out.
"We gotten to know Yes when we did out debut album at Advision Studios; says Bell. ' They were in the studio at the same time. So, we called up Steve Howe and asked it he could help us out. And he was amazing. Steve stayed up all night, learning the songs, did the gig and was superb. He really came thought for us that day,and I can't thank him enough for helping us out of the hole".
Obviously, though Howe wasn't about to turn in his position with Yes to join Stone The Crows. So, the band had to start their search all over again for a new guitarist. But this was where the band found allies coming to their rescue.

"Everyone used to hang out in London at the Speakeasy Club. We all knew each other, and we'd all help one another out. It was the way things were back then. We all wanted to see other bands do well. And someone suggested we should check out a guy called Jimmy McCulloch. He had just left Thunderclap Newman's band, and like Leslie was Scottish."
So, McCulloch duly joined the band in time to finish off the recording demands for new album 'Ontinuous Performance'. 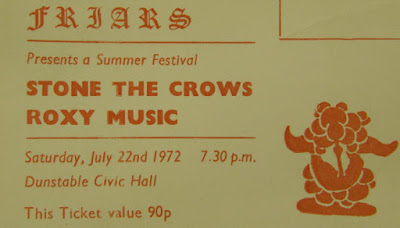 Les had already done most of the guitar parts for the album." reveals Bell. So, Jimmy just came in and played on a couple of tracks." McCulloch is featured on the songs 'Good Time Girl' and 'Sunset Cowboy'. Harvey played the guitar parts on the other songs.
"I wrote the lyrics for 'Sunset Cowboy' in memory of Leslie," says Allen. "It's safe to say that we were all pretty shell shocked for a while (after the accident), but you just get on with things - not much else you can do."

The album title reflected the band's situation, as Allen explains.
"I think we were implying that, even though Leslie was gone, we were carrying on. The missing letter 'C' in the album title might have been a symbolic thing, relating to the fact that Leslie was also missing.
"I seem to remember Mark London sometimes called him Ches Chesney, or something like that. I was Collie Colsner, Maggie was Mags Magsler; it was a Mark thing. You'd have to have known him in those days to understand. He was Canadian and had done, among other things, stand-up comedy in the Jewish Alps - the Catskill Mountain resort."
Released later in 72, 'Ontinuous Performance'; actually charted at number 33 in the UK. But for Bell it sounded the death knell for the band. 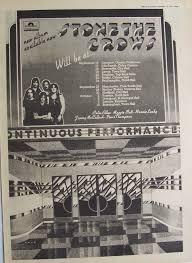 "The fire had gone out of us. There was no energy anymore. When Les died we lost something, and the band couldn't ever be the same again. Jimmy wasn't a writer, so we were have faced a problem in the future anyway. To be honest, we were all shattered by the loss of Les and I felt I couldn't carry on with this band."

In 1973, Stone The Crows split up. "It was about two days after our last gig in Montreux - it was a management decision", reveals Allen The band  have left a legacy of four albums, all of which have their own character. And the ensuing decades have only added to the richness of their legacy and reputation. "We should have been bigger and more successful than we were", insists Bell, with good reason. Allen, though, is a little more philosophical.
"It was what it was - basically a good live band with a lot of fans. To raise yourselves above that you need a hit album or a single that got a lot of airplay. We had neither.'
However what Stone The Crows have left behind musically has ensured they've been lionised by many younger bands through the years. The gift of their values and creativity continues to inspire those who aspire.  [by Malcolm Dome, London, 2015]
. 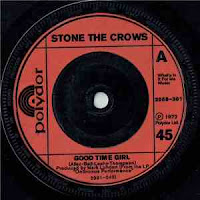 This post consists of MP3 (320kps) and FLACs ripped from my crispy clean vinyl along with full album artwork for both vinyl and CD media.
I heard this album for the first time back in 1977 while I was living on campus in Glenn College at La Trobe University, Melbourne.
At the time, the college had a modest collection of records available for loan for it's student residents and this Stone The Crow's LP was the first one I borrowed.  It was in rough condition but still playable enough to fully appreciate the music that it offered. More than 40 years later, I have located my own 'near mint' copy. Needless to say, my first words when I saw it again after so many years was 'Stone The Crows' !'
As a bonus, I am also including two live tracks taken from the CD re-issue of the album - 'Penicillin Blues' and 'Good Time Girl'.
. 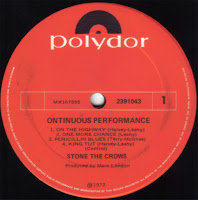