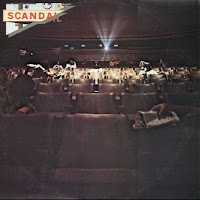 One hit single, one very smooth album and then suddenly Scandal was no more. A little over two years after their first appearance in June 1976, the boys felt they were stagnating and, in November, 1978, announced their break-up. 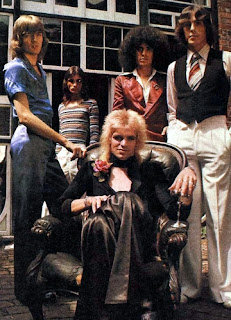 The band formed in Adelaide in February '76. Comprising four English migrants and a token Australian (drummer Aldo Civitico) the band’s stylish UK-centric sound drew on influences such as Supertramp, Bryan Ferry and David Bowie for inspiration. They spent their first four months rehearsing then things happened quickly. Late in 1976, they were signed by Mushroom Records, in January '77 their first single, 'Best Deal In Town'/'Mountain Legend' was released, followed by the very bizarre 'Harry' (which featured a 1930s type sound) .

The band then enjoyed its only national chart success with their third single, a cover of the smooth soul/pop track How Long (originally by British band Ace). Scandal’s version reached #23 in Australia in May 1978. As the disc climbed the charts in May, their debut album, simply titled Scandal, was issued. It included a re-recorded, heavier sounding version of 'Best Deal In Town' and a classy track called 'She's A Lady' — released as their next single in June. 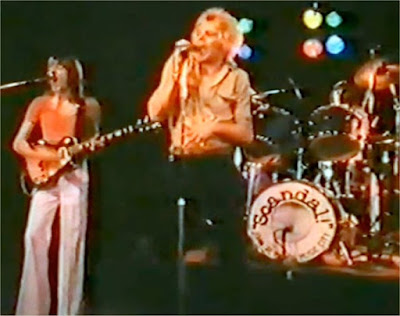 The band continued to tour until November '78 when they went off the road to prepare their second album. But all was not well in the Scandal camp. By the end of the month it was confirmed that they had split up, feeling they had achieved all they could in their present form Their final performance was in December. 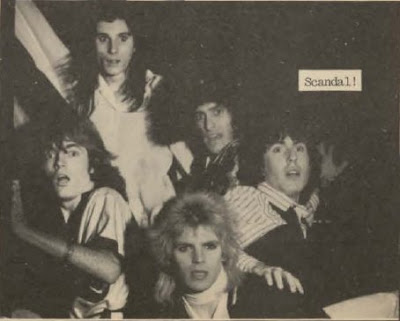 Kerrison, Harriott and Watson decided to start a new band called The Extractors to be launched early in 1979, while Smith resolved to settle in Sydney. By August 1979,  the three revived the Scandal name for a new band with Adrian Dessent on guitar, Greg Trennery on bass and Nat de Palma on drums. The new line-up was not successful and Kerrison left the music industry while Dessent went on to work with Wendy and the Rocketts. By 1983, Watson had joined Sydney band, The Venetians. [extracts from Noel McGrath's Australian Encyclopedia of Rock 1978-79 Yearbook p37-38  AND nostalgiacentral.com] 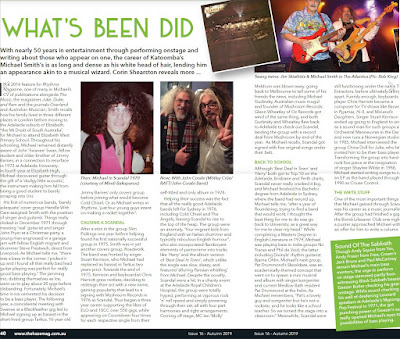 Article from 'The Haze' by Michael Smith
(Issue 16 - Autumn 2019. p 40-41)
With nearly 50 years in entertainment through performing onstage and writing about those who appear on one, the career of Katoomba's Michael Smith's is as long and dense as his white head of hair, lending him an appearance akin to a musical wizard. Corin Shearston reveals more ...

In a 2016 feature for Rhythms' Magazine, one of many in Michael's CV's of publications alongside The Music, the magazines Juke, Duke and RAM and the Journals Overland and Australian Musician, Smith recalls how his family lived in three different places in London before moving to the Adelaide suburb of Elizabeth, "the Mt Druitt of South Australia", for Michael to attend Elizabeth West Primary School. Throughout his schooling, Michael remained distantly aware of John 'Swanee' Swan, fellow student and older brother of Jimmy Barnes, in a connection to resurface in 1973 at Adelaide University in fourth year at Elizabeth High, Michael discovered guitar through the gift of a 'dodgy little acoustic' instrument making him fall from being a good student to barely scraping into Uni. His first of numerous bands, 'barely adequate' cover group 'Handle With Care assigned Smith with the position of singer and guitarist.

Things really clicked in December 1971 through meeting 'real' guitarist and singer John Pryer at a Christmas party, a young man engrossed in a garage jam With fellow English migrant and drummer Steve Prestwich, direct from Liverpool. As Michael tells me, "there was a bass in the corner. I picked it up and I found all that really bad lead guitar playing was perfect for really good bass playing." The jamming trio, dubbing themselves as Ice, went on to play about 20 gigs before disbanding - Fortunately Michael's time in Ice cemented his decision to be a bass player. The following year, a coincidental meeting with Swanee at a Blackfeather gig led to Michael signing up as bassist in the short lived group Tarkus (named after the LP released by the then popular Emerson, Lake and Palmer), 16 year old Jimmy Barnes' only covers group before joining what would become Cold Chisel. Or as Michael writes in Rhythms, 'just four young guys intent on making a racket together'.

After a stint in the group Slim Pickings one year before helping found his first nationally successful group in 1975, Smith was in yet another covers group, Roadwork. The band was fronted by singer Stuart Kerrison, who Michael had replaced as bassist in Tarkus two years prior. Towards the end of 1975, Kerrison and keyboardist Chris Harriott grew restless, deciding to redesign their act with a new name, gaining popularity that lead to a signing with Mushroom Records in 1976 as Scandal. 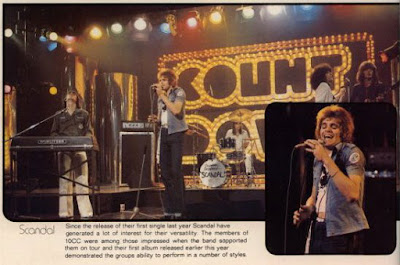 Thus began a three year career supporting the likes of ELO and 10CC over 550 gigs, while appearing on Countdown four times for each respective single from their self-titled and only album in 1978.
Helping their success was the fact that all the really good Adelaide bands left for Sydney in 1976, including Cold Chisel and The Angels leaving Scandal to rise to the top  of the heap. The group were an anomaly, "four migrant kids from England with an Italian drummer and typically ridiculous English humour", who also incorporated Flamboyant elements of pantomime into tracks like "Harry" and the album version of 'Best Deal In Town', which unlike the single was slow, sleazy, and featured ''alluring Parisian whistling' from Michael.

Despite the novelty, Scandal were a hit. In a charity event at the Adelaide Royal Children's Hospital, the group were totally hyped, performing at vigorous rock 'n' roll speed and simply powering through their set, all with four part harmonies and tight arrangements.

Coming off stage, MC Ian 'Molly' Meldrum was blown away, going back to Melbourne to tell some of his friends the news, including Michael Gudinsky, Australian music mogul and founder of Mushroom Records. Glenn Wheatley of Oz Records got wind of the same thing, and both Gudinsky and Wheatley flew back to Adelaide to check out Scandal, landing the group with a record deal from Mushroom by end of the year. As Michael recalls, Scandal got signed with five original songs under their belt. 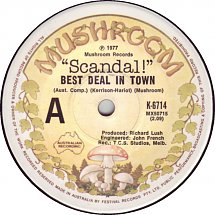 Although "Best Deal In Town" and "Harry" both got to top 10 on the Adelaide, Brisbane and Perth charts, Scandal never really cracked it big, and Michael finished his Bachelor degree from Adelaide in Sydney, where the band had wound up.

Michael tells me, "after a year of floundering, trying to find a band that would work, I thought the best thing for me to do was go back to University, as a great way for me to clear my head." While completing a Masters Degree in English Literature in 1979, Michael was playing bass in indie groups No Traces and Phil de Void, the latter including Divinyls' rhythm guitarist Bjarne Ohlin. Michael's next group Pat Drummond's Skooldaze, was an academically-themed concept that

went on to spawn a mini musical and album with singer/songwriter and current Medlow Bath resident Pat Drummond at the helm. As Michael remembers, "Pat's a lovely guy and songwriter but he's not a rockstar, and he looks like a school teacher. So we turned the stage into a classroom."  Meanwhile, Scandal were still functioning under the name The Extractors, before ultimately falling apart. Funnily enough, keyboardist player Chris Harriott became a composer for TV shows like Bananas In Pyjamas, Hi-5 and McLeod's Daughters. Singer Stuart Kerrison ended up going to England to work as a sound man for such groups as Orchestral Manoeuvres in the Dark and now runs a Norwegian studio in 1985. Michael interviewed the group China Doll for Juke, who later invited him to be their bass player. Transforming the group into hard rock five  piece at the resignation of singer Shaylee Wilde in 1986. 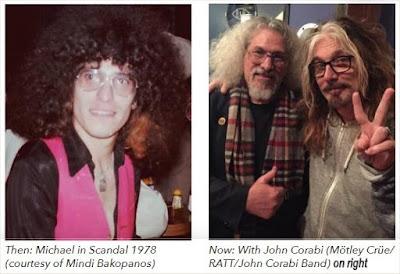 One of the most important things that Michael gained through Scandal was his career as a music journalist. After taking his first steps into music journalism with a low budget journal called Australian Musician, Michael was able to contact artist's he'd met through  tours with Scandal and enquire on the possibility of articles, features, interviews and reviews, Building up the Australian Musician side of things, Michael then sent pieces to Duke and RAM, with the proposal of  'remember me', I was in Scandal, here's a review. So that's how I conned my way into rock journalism. And I'm still there". 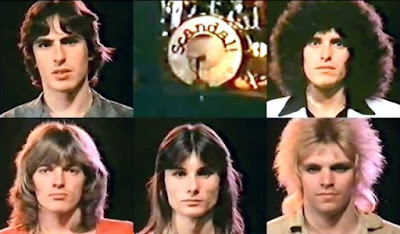 .
This post consists of FLACs ripped from vinyl (thanks to Sunshine) and includes full album artwork and label scans.  There are also a multitude of band photos included (not all displayed above) and a copy of the Haze Article.  One thing that I really enjoy about this album is the diversity of musical styles demonstrated in each track and the great vocal harmonies, not dissimilar to those of Mother Goose.   It is a shame that Scandal didn't go on to record a follow up album, as I'm sure their output would have been a lot more mature and a certain commercial success (in line with their hit single "How Long").
Update: Just added a rare B-Side Single as a bonus track (thanks to Ozzie Musicman)
.
Track Listing 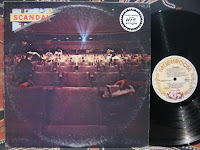 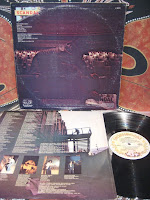