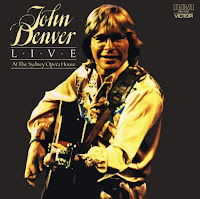 Singer/songwriter/guitarist, born John Henry Deutschendorf in Roswell, New Mexico, on Dec 31, 1943. His father an air force pilot who held three world aviation records, the young John Denver travelled U.S. as his parents moved from one base to another. First performed as folk singer in Lubbock, Texas, where he attended college - majoring in architecture - in the early '60s.
Denver performed in Los Angeles from 1964 and successfully auditioned for gig with Chad Mitchell Trio, replacing the departing Mitchell. Toured with Trio between 1965-69 before embarking on solo career performing much of own material, notably "Leaving On A Jet Plane" which Peter Paul & Mary recorded in 1969 for huge hit.

Denver's version of song was included on his first solo album Rhymes & Reasons, released in U.S. Sept 1969 (Denver albums issued in different order in U.K.). By 1970 and two more albums, Take Me To Tomorrow and Whose Garden Was This?, Denver was still seeking widespread acceptance although the tenor of subsequent recordings had by then been established - saccharine acoustic melodies topped off with lyrics which plumbed the depths of naivete. 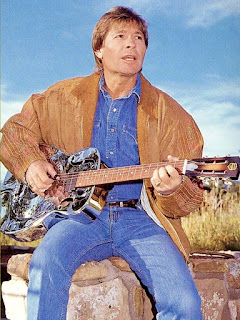 Ideal Easy Listening fodder, in fact, for those who felt urge to empathise with the "youth movement" (Denver has also milked ecology dry as a source for material) but couldn't handle the incisiveness of a Bob Dylan, Neil' Young or even Paul Simon - and in 1971 America eventually took country-boy Denver to its heart with the gold single "Take Me Home Country Roads" and the similarly million-selling 'Poems, Prayers & Promises' album.

"Friends With You" also made singles lists later same year, and Denver's buck-toothed grin and homespun banalities have dominated U.S. AM airwaves and charts ever since.
'Aerie' and 'Rocky Mountain High' became gold albums in 1972, the title track from the latter becoming his second million-seller. In 1973, "Farewell Andromeda" similarly went gold, as did "Annie's Song" single following year which saw Denver enter U.K. charts for first time.

In 1975, the Denver bandwagon accelerated into new gear with a series of U.S. TV specials and Lake Tahoe cabaret appearances back to back with Frank Sinatra. His album 'Windsong' racked up a million in advance orders alone, while "Thank God I'm A Country Boy" and "I'm Sorry" kept him at top of singles charts. Backed by coast-to-coast John Denver TV Special 'Rocky Mountain Christmas' watched by some 30 million viewers, Dec 1975 album of same name was guaranteed gold virtually on announcement of its release. 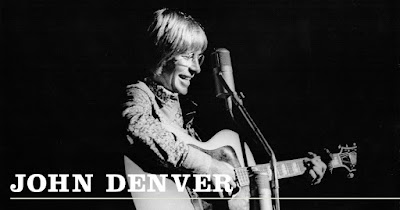 A measure of Denver's phenomenal commercial appeal is the fact that his 'Greatest Hits' collection had, by the end of 1975, racked up two consecutive years on the U.S. album charts.
'Live In London' (U.K. only) was recorded during spring 1976 concerts in the city and - in what is probably record time - rush-released within some ten days of Denver's last gig. In the same year, Mercury issued 'Beginnings', an album from Chad Mitchell Trio days.
In 1977, Denver co-founded The Hunger Project with Werner Erhard and Robert W. Fuller. He served for many years and supported the organisation until his death. Denver was also appointed by President Jimmy Carter to serve on the President's Commission on World Hunger, writing the song "I Want to Live" as its theme song. In 1979, Denver performed "Rhymes & Reasons" at the Music for UNICEF Concert. Royalties from the concert performances were donated to UNICEF.

A longtime aviator, Denver died on October 12, 1997, when the experimental plane that he was piloting went down over Monterey Bay, California.

Album Review
This recording contains the title track from what was at the time his latest release, "I Want to Live" and 1977 was the pinnacle of John's career; which is why this live offering is one of his best. The tracks on the LP are in the order performed except for, "Today", "Calypso" and "Me and My Uncle" which were not initially included, but I have chosen to include them here as bonus tracks (sourced from the 1999 CD release)

In my opinion the only enhancements which could be made, would be if they would have included more of the banter between John and the audience; which was a trademark of his concerts. One left his shows feeling as though you'd visited with an old friend, having spent the evening catching up and listening to music, he was a terrific story teller.
If dialog is not your preference, then the perfect renditions of the songs included will be well worth the purchase price.

If you just want John Denver alone with his guitar, this performance is probably not for you. There are a couple of songs like that, but for the majority he has orchestra and vocal backups in this performance, as well as extra guitars, banjos, etc. The recording quality is crisp and clear, the songs are beautifully arranged. The female background singer’s voice blends so perfectly with John’s.

John takes me back to a simpler time, when honest felt love songs and songs of nature were on the radio,... and had a important place in our lives. If you love John Denver, you will love this live performance at the Sydney Opera House in Australia.

Throughout his decade-spanning career, Denver’s works were portrayed across an array of mediums, from film to social activism, to politics, to music, where he would arguably have the most impact. Known for his love of the environment, and his disdain for fast paced, city living, Denver became a unique voice for an era, and one that’s all the more relevant today. 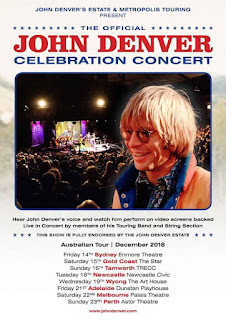 Audiences were given a-close-as-they-could-get experience of seeing Grammy Award-winning singer/songwriter and Poet Laureate of Colorado John Denver in a concert setting, some 20 years after his passing.

This post consists of MP3's (320kps) ripped from my mint Vinyl and includes full album artwork, label scans and Tour Booklet. To enhance the experience, I have chosen to include 3 additional tracks that were released on the CD release but were not included on the original vinyl release due to the time limitations of the LP media. In addition, I thought I'd throw in a live of recording of "Amsterdam" taken from his 'Live At The London Palladium', a song which I really like. Hope you enjoy this offering. 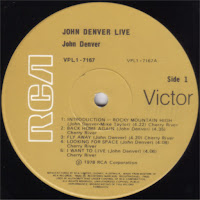 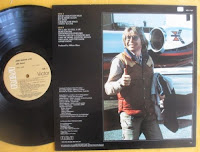