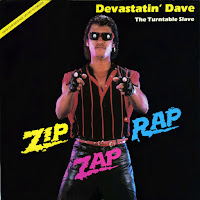 Remember 'Zapped,' the 1982 sci-fi comedy starring Scott Baio as a nerd who gains telekinetic powers? Something tells me Devastatin' Dave (The Turntable Slave) was tremendously inspired by that slice of cinematic excellence. But, instead of waxing righteously about lifting skirts and altering the paths of pitches on the diamond, Dave uses his lyrical powers for an anti-drug message.

'Say No to Drugs' was the pop culture slogan of the '80s, so we're wondering why a single targeted to kids would have the word "zap" over The Turntable Slave's Vitamin D. Please note that the rap's lyrics will make you significantly dumber than any drug on the streets.

Precious little is documented about the artist known to us only as Devastatin’ Dave (The Turntable Slave). His sole legacy on earth — according to the internet anyway — seems to be a lone release, the “Zip Zap Rap” vinyl single. It was released in 1986 on the Superstar International Records label, a short-lived imprint out of California whose biggest artist was Scherrie Payne of the Supremes.

The single cover and centre rings offer little help in uncovering the identity of the man behind the bitchin’ red-rimmed sunglasses. Songwriting for “Zip Zap Rap” is credited to a D. Cary (who I believe to be Dave Cary, the man himself) and Wayne Henderson. Henderson also received a production credit. Now the name Wayne Henderson rings a huge bell for me, as that’s the name of the trombonist/producer who co-founded the Jazz Crusaders — one of my favorite groups — in 1961. 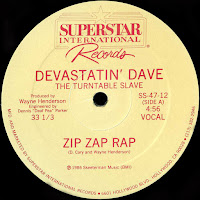 Whoever Dave is, or wherever he came from, he’s here on this record to just one thing. Rap about the dangers of cocaine and inspire you to stay in school.

This month's WOCK on Vinyl fits the Crazy & Korny categories like a glove - just like the ones Dave is wearing on the front cover.

WARNING: This probably sounds better if you are actually using cocaine, but I do not condone such activities. But seriously, this song blows!

Posted by AussieRock at 9:00 AM