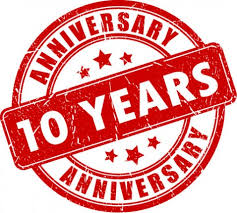 Well Folks, it looks like this blog has survived another 5 years and celebrates it's 10th Anniversary today.  A lot of water has flowed under the bridge during this time (843 posts, 1000 comments, over 2.1 million web page hits and 318 blog followers to be exact).
.
I must say, maintaining this blog has been a Labor of love and sometimes it's been difficult to keep the posts coming, especially when it comes to the research behind the albums and the artists.  Nevertheless, it is my intention to keep blogging away as I've still got a ton of albums to bring to the table and the passion to share these with you is still there.  Of course, the occasional comment of appreciation is always welcome, as are suggestions on what to post, so please keep them coming. 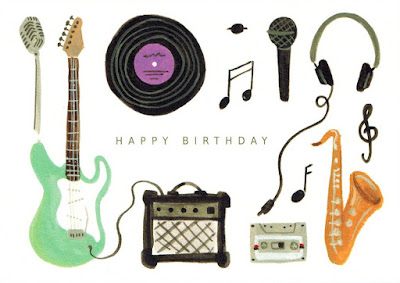 .
To help celebrate this auspicious occasion, I have decided to share Alvin Lee's post mortem 'Ten Year After' release (under the name of Alvin Lee & Ten Years Later) entitled 'Ride On'.  This post is somewhat symbolic at this time - Ten Years Later with the intention to keep Riding On.
. 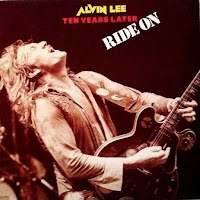 In 1979, Alvin Lee with a powerhouse trio he called "Ten Years Later" released their debut album "Ride On". 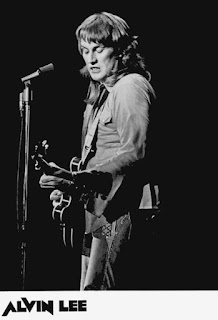 The first 5 tracks are recorded live with no overdubs. "Ain't Nothin' Shakin'" is a real non-stop rocking workout, the cover version of "Hey Joe" is almost better than what Jimi Hendrix himself did with it as Alvin sets that song on overdrive, and "Going Home" you just can't miss and it comes off with flying colors again.
Tracks 5 - 9 were recorded in the studio. The songs are good as are the lyrics, and Lee's guitar work is brilliant.
"Ride On Cowboy" was released as a single, with "Can't Sleep At Nite" on the RSO release flip side, while the Polydor featured "Sittin' Here" instead.

This post consists of MP3's (256kps) ripped from CD and includes full artwork for both CD and Vinyl formats.
Note that the Live and Studio tracks are reversed on the Vinyl format (Side 1 - Studio / Side 2 - Live) 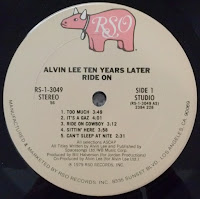