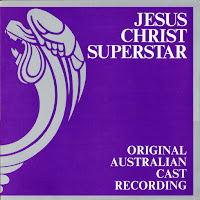 Jesus Christ Superstar is a rock opera created by Tim Rice and Andrew Lloyd Webber in 1970. The earliest Australian version was staged from May 1972 to February 1974, and was quickly followed by the more popular release from 1973, entitled the 'Original Australian Cast Recording' which featured well known artists Jon English and Stevie Wright.  I was lucky enough to see this 1973 production through my Church Youth Group and was profoundly impressed with this fresh view on Christianity.

Based on a concept album project written by Andrew Lloyd Webber and Tim Rice, and the subsequent long-running Broadway performance, this film tells the story of the final 6 days in the life of Jesus Christ through the troubled eyes of Judas Iscariot. Too often miss-labelled as a musical, this film is a "rock opera." There are no spoken lines, everything is sung. 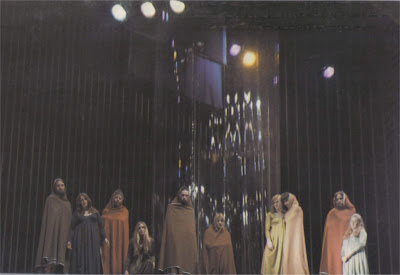 The first 'rock opera' by Andrew Lloyd Webber and Tim Rice to be produced for the professional stage, Jesus Christ Superstar has wowed audiences for over 40 years. A timeless work, the rock opera is set against the backdrop of an extraordinary and universally-known series of events but seen, unusually, through the eyes of Judas Iscariot. 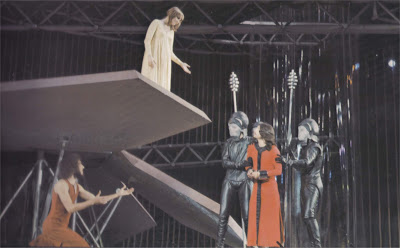 Loosely based on the Gospels of Matthew, Mark, Luke and John, Superstar follows the last week of Jesus Christ’s life. The story, told entirely through song, explores the personal relationships and struggles between Jesus, Judas, Mary Magdalene, his disciples, his followers and the Roman Empire. 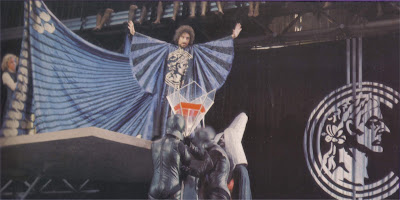 The iconic 1970s rock score contains such well-known numbers as “Superstar,” “I Don’t Know How to Love Him” and “Gethsemane.” A true global phenomenon and perfect pick for schools, community theatres and professionals alike, Superstar continues to touch new generations of audiences and performers. 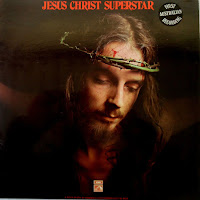 This particular release is fairly unique, in that — clocking in at eighteen songs from a show that only had twenty-three (or twenty-four, if a recording included the new addition to the stage version, “Could We Start Again Please”) to begin with — it’s one of the rare “knock-off” recordings that took a swing at getting the lion’s share of the score in the can. Made in Australia by a combo assembled by producer and organist Mike Perjanik, and deemed good enough by EMI to give it a British release on their cheapie Starline label, it is often dubbed the “First Australian Cast” by fans because it pre-dates the official Australian production.

Vinyl Vulture, in its terrific (now out-of-print) feature on the early recordings of JCS, claimed that “none of the vocalists get any credit whatsoever on this album,” but my research suggests they might not have been looking hard enough. (Indeed, it escaped their notice that Erl Dalby, the singer playing Judas on this album, seems to have been something of an Australian star — or at least a fairly well-known quantity in music circles — at the time, as the History of Australian Music From 1960 until 2010 suggests.)

At any rate, they can hardly be blamed for this mistake, as they are right in their assessment that “the band are the stars, not the singers.” The vocals are effective, but not over-egged, and so it’s the musicians who really shine, delivering a harder rock experience than the original album with much multi-tracked guitar and organ, and wailing fuzz-toned solos chucked in the mix at random.

Standout tracks include killer takes on “Heaven On Their Minds,” “What’s The Buzz,” and “Superstar,” and versions of “The Temple” and “Gethsemane” with a genuine rock edge.

Unfortunately, this album is out of print, but rather than try your luck finding used copies through such variable (on a good day) sources as eBay, you can listen to it here.

Jesus Christ Superstar began as a concept album because no producer wanted to put it on stage.
Lyricist Tim Rice and composer Andrew Lloyd Webber, who met in 1965 when they were 20 and 17, respectively, enjoyed their first taste of shared success with Joseph and the Amazing Technicolor Dreamcoat in 1968. Next, the duo focused on another Biblical figure: Jesus of Nazareth. The pair envisioned a daring new rock musical that would retell—from Judas’s perspective—the story of Christ’s betrayal and execution. But Lloyd Webber and Rice couldn’t find anyone who was willing to produce the project as a stage show—Lloyd Webber recalled that they were told it was "the worst idea in history." So they transformed it into an 87-minute, two-disc concept album instead; it was released in 1970.

The apparent setback may have been a blessing in disguise. Both men have argued that, by writing Superstar as an album at the onset, they were able to streamline the score more effectively than they otherwise could have. “Doing it on record,” Rice said, “made it shorter, cut out the book, made it more contemporary, made it more rock, gave it more energy, and identified it more with a younger audience. All those things the record gave us. We didn’t really appreciate that at the time because, largely thanks to Andrew, we were trying to write for the theatre, not for records. But doing it that way around worked so well, because in addition to making the work itself better, it promoted the work so well, so when it finally hit the stage, everybody knew the entire score.” The show made its Broadway debut in 1971. 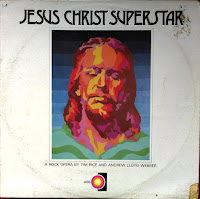 When any show is a hit, a lot of people will be quick to capitalise on the show’s success. In this case, Jesus Christ Superstar was one of the first albums of its kind, and everyone wanted their own slice of the pie where the Passion According to Tim and Andrew was concerned. At this time, many “budget” labels famous for releasing low cost sound alike albums (“knock-off” recordings capitalising on shows, songs, or albums that became hits) jumped into the fray.
The performers were usually never an actual ensemble that had performed JCS (indeed, in its early days, the number of actual casts performing the show were very few), but instead merely a group of vocalists who recorded songs from the show. Usually, these recordings were very cheaply put together and produced, and priced to own. (In the future, albums like these, now labelled “studio cast recordings,” could no longer be accurately described as simple cash-grabs, but at the time, the use of the phrase “knock-off” is totally appropriate.)

Though it may be a matter of opinion, this particular fan feels that since the performers on these studio recordings lack the experience of getting on a stage and actually performing the show in front of an audience, the performances are pleasant enough, but not always up to par with a real cast album.

This post consists of both Australian releases ripped from vinyl to FLAC format and includes full album artwork for both releases. Note that the 1972 release (studio only) is very rare and extremely hard to find. I was lucky enough to stumble across this release at the local Flee Market some months ago, and paid the hefty price of one dollar. A miracle !
The other release from 1973 with it's distinct Purple Cover is fairly easy to come by, probably because there were so many printed, but is certainly worth having for its connection with Jon English and Stevie Wright.
.
First Australian Release (1972) Tracklist 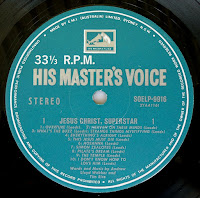 A1 Overture
A2 Heaven On Their Minds
A3 What's The Buzz / Strange Thing Mystifying
A4 Everything's Alright
A5 This Jesus Must Die
A6 Hosanna
A7 Simon Zealotes
A8 Pilate's Dream
A9 The Temple
A10 I Don't Know How To Love Him
B1 Damned For All Time / Blood Money
B2 The Last Supper
B3 Gethsemane (I Only Want To Say)
B4 King Herod's Song
B5 Trial Before Pilate
B6 Superstar
B7 Crucifixion
B8 John 19:41
.
First Australian Release FLACs Link (264Mb)  New Link 05/04/2029
.
Original Australian Cast Recording (1973) Tracklist 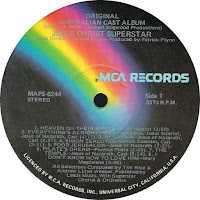