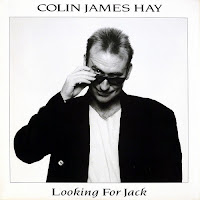 Two years after Men At Work went down in flames, front man Colin James Hay returned to the spotlight with his solo debut.   Released by Columbia (which happened to be Men At Work's label), the company clearly had big hopes for Hay's solo career.  Recorded in London with Robin Millar producing  "Looking for Jack" sported an extremely large supporting cast (by my count the liner notes listed 26 players.   (The title was reportedly a reflection of a brief post-concert meeting with Jack Nicholson.)  Anyhow, anyone expecting to hear the fifth Men At Work album was probably going to be slightly disappointed by this album.  While Hay's voice remained instantly recognizable, that also meant it was impossible to separate from his Men At Work catalog.   For better or worse Hay seemed interested in making certain the debut was not a solo Men At Work endeavor.   Sure, it was impossible to completely avoid the Men At Work comparison.   Tracks such as 'Can I Hold You?' and 'Master of Crime' had a distinctive Men At Work flavor, but those tracks were the exception to the rule.   Unfortunately Hay wasn't very successful in finding a new sound.  Musically it was quite diverse with stabs at early Sting ('Puerto Rico'), "Graceland" era Paul Simon ('Hold Me'), and a host of other genres.  Professional and serviceable, but probably not an album most folks were going to spin on a regular basis. [ review by RDTEN1 April, 2018]
. 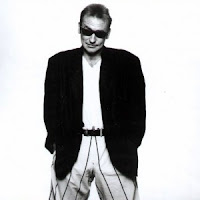 Interview with SongFacts
"Looking for Jack" is the title track to Colin Hay's first solo album after disbanding his group Men At Work. When the group split up in 1986, he started work on the album in Los Angeles, which was a strange place for Hay, who was raised in Scotland before moving to Australia at age 14.

I couldn't sum it up: why people go to Los Angeles, why they take that trip. I knew a lot of people go there to realize their dreams and to get famous or whatever it is. People are drawn to that particular city for some reason and they all seem to be looking for something.

I couldn't finish the song. I had that idea and I had a little bit of music for it. Then I went to a concert and I saw Jack Nicholson standing in the audience, and he was standing next to me at the mixing console. I said, 'Excuse me, Mr. Nicholson, my name's Colin Hay. I just want to say, I'm a great big fan of yours.' And he said, 'I can't hear you.'

So, I got excited by that because I had just met Jack Nicholson and then he walked off. The girl was still talking to me but I was distracted and I kept looking over her shoulder. She said, 'What are you doing, Colin?' and I said, 'Oh, I'm sorry, you'll have to excuse me, I'm just looking for Jack.' And she said, 'Yeah, everybody's always looking for Jack.' So, I said: 'Excuse me, I have to go home and finish something.'" 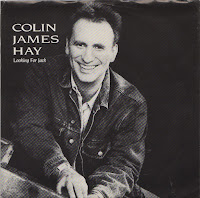 This song aged well, finding space in Hay's setlists, but it fared poorly when it was released, making no chart impact. It was quite a comedown for Hay, who was a huge star with Men At Work, but couldn't find an audience with his solo material despite label support - the album was released on Men At Work's label Columbia, which commissioned a video to promote it.

Hay moved to MCA for his next album, Wayfaring Sons (1990), but was dropped after that one flopped. For much of the '90s, he battled alcohol addiction while playing small shows and releasing independent albums. The work paid off: he got sober and earned a deal with Compass Records, which helped him find a new audience. He never again came close to the heights he reached with his former band, but he earned enough acclaim to fill small venues on a regular basis and earn airplay on some eclectic radio stations. [extract from Songfacts.com]
. 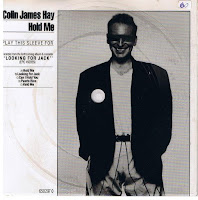 This post consists of FLACs ripped from my newly acquired vinyl, yet another chance find at the local flee market when one searches through the piles of 'rubbish' vinyl releases that no one wants.  Full album artwork plus label scans are included. I have also included the B-Side non-album track Home Sweet Home which in its own right deserved a place on the album. Great track.
It is interesting to note that "Hold Me" was released as a single with a playable cover jacket (see left). The playable side features a medley of song exerts from the album. I've never seen this type of packaging before and would love to know if any other artist has released a record with a playable jacket.
. 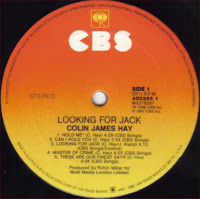 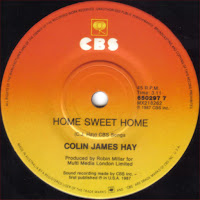 Posted by AussieRock at 9:22 AM