W.O.C.K On Vinyl: The Sound Of Steam (Flexidisc) 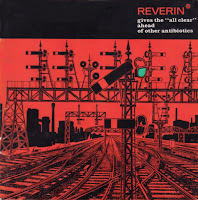 The sounds you will hear on this record will soon be history. The age of the steam locomotive within Australia is rapidly disappearing and the sounds that once fired many a chiId's imagination will soon fade into obscurity. It is for this reason we present to you these sounds of a past era, in the sincere hope that you will find them interesting. This record was produced by Australian Hoechst Limited with the co-operation of the Australian Railway Historical Society, in appreciation of the support given by the Medical Profession to the preparations marketed by this Company.

P-Class  No.511
An important cross-country link connects Merredin on the West Australian Government Railways, Eastern Goldfields Railway with Narrogin on the Great Southern  line.  In this  recording,  P-Class locomotive No. 511 is heard leaving Corrigin with a goods train bound for Merredin. The P-Class were first introduced to the W.A.G.R. in 1924. They weigh 97 tons and are of the "Pacific" type with a 4-6-2 wheel arrangement. As the sequence opens, the exhaust of the Corrigin power station can be faintly heard. P-511 slips momentarily but the driver soon has the locomotive under his control again. As the train approaches, the driver opens his cylinder cocks, gives a short whistle for   a   level   crossing   and shuts the cocks again. After the   train   has   passed   the microphone a change in the exhaust   note   will   be   detected. A cow moos protesting as the train continues up the  steep gradient into the night. 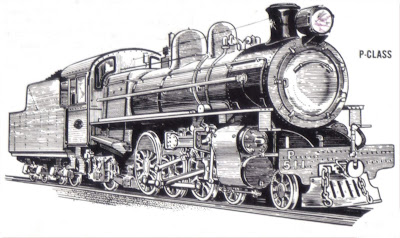 PMR-Class No.734
Now a Pmr-Class locomotive, No. 734, is heard as it climbs the Leederville bank in the suburbs of Perth at the head of a passenger train. The Pmr-Class are a derivative of the earlier P-Class and were built by the North British Locomotive Works in 1949. All-up weight is 109 tons. The "Pacific" is working well as it briskly approaches our microphone, passes it, and shuts off at the top of the grade. The train, which carries workers from the W.A.G.R. Midland Workshops, prepares to stop at the next station. 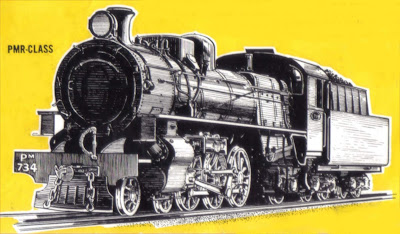 PMR-Class No.731
In this sequence, Pmr-Class locomotive No. 731 is at the head of a night goods train between Bunbury and Perth. The train has slowed to ascertain whether a stop is necessary at Cookernup. Our microphone picks the train up just as the driver learns that a stop will not be required. He opens the throttle, whistles to the guard, and accelerates his long train on its journey towards Perth. 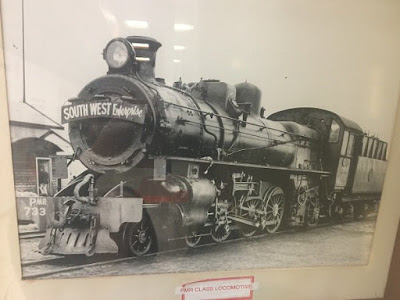 C-Class No.270
For many years, the West Australian Government Railways operated their own sawmill at Banksiadale, some 50 miles from Perth. A busy railway, carrying both logs and sawn timber, served the mill. C-Class locomotive No. 270 "Blackbutte" is heard hauling a rake of Jarrah logs up the last gradient into the sawmill itself. "Blackbutte" was built by the Baldwin Locomotive Works, U.S.A., in 1904. There is a quick recovery from a bad slip and as the train moves past the microphone, the locomotive bell— a feature very uncommon in Australia—is heard tolling. The train comes slowly to a halt in the sawmill yard. This line, 50 miles long, was closed in October, 1963.

Fowler
Some two miles from Leonora, which is north of Kalgoorlie on the fringe of the semi-desert, stood the Sons of Gwalia goldmine. To bring in Mulga firewood for conversion to charcoal and subsequent use in its gas-producer-engineered power station, the mine constructed a 50 miles-long 20" gauge tramway. Two steam locomotives operated this unique line and they themselves burned Mulga wood in their furnaces. One of them, known as "Fowler", built in England in 1916, is heard in this sequence making a rush up the last gradient leading to the mine yard. So steep is this gradient that trains had to be divided into two or three portions at its foot. As the engine comes close to us the rattles of the loose motion gear will be noticed. "Fowler" weighed only 13 1/4 tons. The line and the mine were closed in December, 1963. 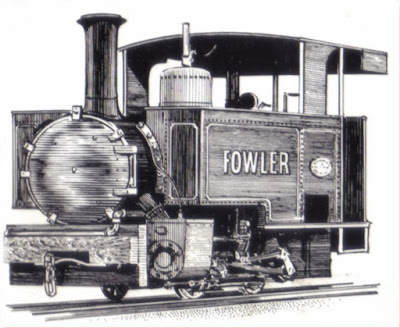 OK, I think I need to explain myself with this month's W.O.C.K on Vinyl post.
Some 50 years ago my dad (a chemist) brought home this promotional flexidisc, given to him by one of the many pharmaceutical reps that visited his pharmacy, in search of  a sale (in this case an antibiotic called REVERIN). Of course, being the youngest boy in the family (7-8 years old), I was the lucky recipient of these wonderful steam train sound affects.
Of course, I have treasured this nostalgic gem ever since, and have finally decided to share these Obscure recordings with you.  Because this flexidisc is so obscure and old, I doubt if any other copies still exist, let alone ripped and made available electronically.
I hope you appreciate these ultra rare recordings (MP3 / 320kps) from the magical era of 'Steam Trains' and if you're a real enthusiast, I'm sure these recordings will 'blow your whistle', big time! 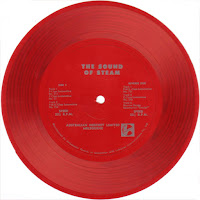 Posted by AussieRock at 8:52 PM