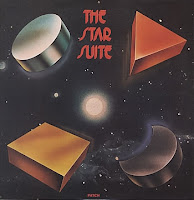 'The Star Suite' is an interpretation of the Four Elements of the Zodiac: Air, Fire, Water & Earth by an all Australian studio band called Patch.
The idea of this Aussie project, based in Melbourne, was conceived by renowned producer Peter Dawkins (Dragon, Billy Thorpe, Australian Crawl, Billy T, Rabbit, Mi Sex Pseudo Echo and Air Supply), who gathered a line-up of rock veterans and session musicians to play music inspired by the four elements of the Zodiac. ''The star suite'' came out in 1973 on the Harvest label.

Patch was mainly made up of Ariel and Taman Shud personnel, guitarist and fine folk singer /songwriter, Mike McClellan and others. It is not hard to pick out Spectrum / Ariel's Mike Rudd's guitar in the mix along with keyboardist Tony Esterman, New Zealander Rod Coe on bass and drummer Doug Gallacher, later of Madden & Harris.

They were supported by a number of guests, like percussionist Ian Bloxsom from Crossfire, Tony Ansell on organ, bassist Bill Putt, also of Spectrum and Ariel, cellist Nathan Waks, Ariel's and Taman Shud's guitarist Tim Gaze and saxophonist Doug Foskett.

Liner Notes (thanks to Ozmuze at Midoztouch2 for transcription)
An original and stimulating concept in music, this suite depicts the most fundamental and profound aspect of astrological symbolism, that of the consideration of the signs of the zodiac in relation to the elements of fire, earth, air and water. One of the most important and ancient classifications (the very starting point of astrological development) and which are personified in four specific and quite definite horoscopical “types” of people. The connecting theme, evident throughout the different movements, has its correspondence in astrology in the common denominator that unites all people, that is, the similarities that are derived simply from the basic human factor involved, which can occasionally become submerged in efforts aimed at detailed interpretation and analysis, and attempts to define the characteristics of every zodiac personality by keeping each separate and distinctly and recognizably different.
Each movement musically portrays the division of that particular “element” into three, that of cardinal, fixed and mutable, and the extension of the initial primary types into the more subtle categories of the twelve signs. The make-up of each of us is a vast yet delicate merging and balancing of varied yet often contradictory character traits, which find clear and genuine connections via our personal natal chart, with the planetary patterns formed at the actual moment, date and place of birth. Every person should be able to give ample reign to their imagination and should find in each of the movements of this suite startling musical ideas that strike chords of identification in the more perceptive regions of the mind (with perhaps an especial rapport with the “element” that singularly might be the most predominant in his own individual horoscope).
I hope that you enjoy this sensitive and beautifully artistic expression of the elements as much as I have. by Karen Moregold.

Review
Four long, instrumental tracks with a gentle atmosphere was what Patch had created and the opening ''Air'' sounds pretty promising, despite its soft and elaborate atmosphere, it sounds like the instrumental efforts of Goldon Giltrap, featuring a heavy acoustic content next to some jazzy keyboards and mellow electric guitars and swirling around orchestral, Fusion and light, psychedelic overtones.I am afraid that the next three pieces are not as good, even if the extended running times give promise for some charming musicianship.''Fire'' holds a very long Classical-drenched harpsichord theme, which is not really memorable, then the music sinks into a mellow Fusion style with decent organ and electric piano, before evolving into some kind of electric Folk Rock.

''Water'' is without question the jazziest cut of the album, but it lacks the nerve and density of the better bands of the style, again the keyboard work is worth mentioning, but I can find no relation between the stretched jazzy experiments and the following Psych/Folk environments on acoustic guitar and organ. ''Earth'' is a constantly developing Fusion piece, opening with flute and acoustic guitars, synthesisers and calm electric textures take over, but the addition of sax after the middle make this one sound more like Jazz Funk.

The music is entirely instrumental and is progressive at its best. Despite being made up of only 4 tracks and being over 40 minutes long, it is by no means boring. It has an ethereal, dreamy feel, building to great climaxes, all rather good, really. Overall, the music is generally better than the awful cover.
.
This post consists of MP3's (256kps) ripped from vinyl (sourced on the web many moons ago) and includes limited artwork.  Note that the rip is a single file Album Wrap. This Australian album is rather obscure and has sold for $50-$150 over the past five years, when it has turned up for sale.  Grab this rip while you can!
.
Tracks Listing 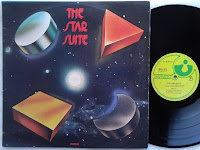 Posted by AussieRock at 9:16 PM