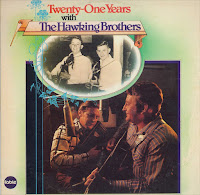 In the early 1960’s Alan & Russell Hawking were already established on the Australian Country Music Scene.  Later they decided to form a band which became one the greatest bands in Country Music history – they had an excellent career for over a decade ‘The Hawking Brothers & The Wildwoods.’
The Hawking Brothers band included – Peter Cohen, Garry Newton, George Xanthos, Joe Attard, Peter Hayes, John Faubel, Leo Dalton and Doug Foley.

The Hawking Brothers & The Wildwoods were supporting band on the Johnny Cash and Buck Owns tour of Australia in early 1970’s and late 1970’s toured with Charlie Pride.  The highlight of their career was being the first Australia group to appear on the Grand Ole Opry, Nashville, 1975. Later they would revert back to the Hawking Brothers.
Their biggest hits were: Hand in the Hand, Catfish John, The Melbourne Cup and Eighteen Yellow Rose.  There were a total of 16 LP’s cut by the brothers before the untimely death of Russel on November 2, 1976. 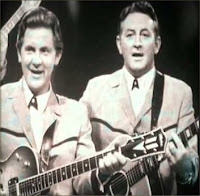 Alan decided to carry on with the band – and 4 more albums were released – which included their biggest hit ‘One Day At A Time’.  In 1971 the Hawking Brother’s fan club was founded by a Dianne Johns
The Hawking Brothers arguably won more awards than any other Australian country group.   When the band started to have promotional problems and difficulties which saw the group falling to pieces, in 1981, Alan Hawking decided to go solo.

Alan’s solo recordings include:- RCA single ‘Just For Today’ and an LP of the same title. In 1983, Alan received a Gold Guitar for best instrumental. Up until his death, Alan recorded his own tracks in his home studio on multi track recording system.
Alan was very talented:- playing – guitars (acoustic & electric), five-string banjo, mandolin, dobro, steel guitar, auto harp, bass and fiddle (who needs a band!)
.
For this month's WOCK on Vinyl, I have decided to post something that pays tribute to these two great artists who pioneered Aussie Country music, paving the way for artists such as Slim Dusty, John Williamson and the Bushwackers to name but a few. This 'greatest hits collection' on the Fable label spans the Hawking Brothers music from 1955 to 1976, when Russell sadly exited the stage for the last time.  As a bonus, I have also included one of their popular covers - "Me And Bobby McGee" from 1972 which was strangely omitted from this compilation.  Oh, and it's in Glorious FLAC Format.
.
Track Listing 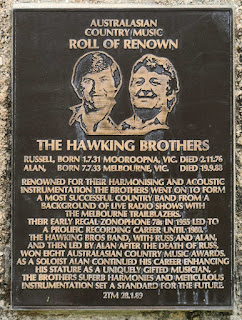