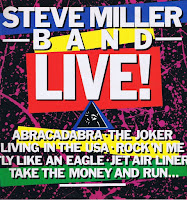 Born Dallas, Texas, on Oct 5, 1943, Steve Miller led his first group, the Marksmen, at age of 12. In 1961, while attending the University of Wisconsin, Steve and another ex Marksman, Boz Scaggs, started a white soul group called the Ardells, which also included Ben Sidran.
After college, Miller headed for Chicago, and after several near misses, including the potentially successful Goldberg/Miller Blues Band, the former half of which was Barry Goldberg (4 Electric Flag), decided to check out the fast-growing San Francisco scene. He acquired a fine bass player in Lonnie Turner (who rejoined him in the mid-'70s) and sent for Tim Davis, leader of the Ardells' rival group in Wisconsin, who brought with him James "Curley" Cooke.
Following the apprenticeship on the Chicago blues circuit, Miller had his first real break fronting his band at the 1967 Monterey Pop Festival.  A deal with Capitol Records was forged on the strength of their performance, resulting in the well-received debut album 'Children Of The Future' in 1968.
As the Steve Miller Band, the quartet of Miller (gtr, vcls), Turner (bs, vcls), Davis (drms, vcls), and Cooke (gtr, vcls) contributed three tracks to the sound track of the film "Revolution" in 1968, this being their recording debut. (The other tracks on the album are shared between Mother Earth and Quicksilver Messenger Service.) 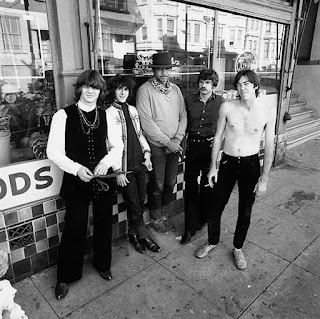 This combination lasted from late 1966 until autumn of 1967, although organist Jim Peterman joined during that time, and is included on Chuck Berry's Live At The Fillmore album, for which the Miller Band provide backing.
When Curley Cooke decided to leave in September 1967, Miller sent for his old friend Boz Scaggs, who had become a noted folksinger in Scandinavia in the meantime, and the line-up of Miller, Scaggs, Peterman, Turner and Davis recorded two albums which are still regarded as milestones: 'Children Of The Future' and 'Sailor'. The former was regarded as perhaps the best example of progressive rock to emanate from 1968, while 'Sailor' was one of the earliest albums to use stage-setting sound-effects to enhance the music. Many still consider it Miller's finest hour.
In August 1968, Scaggs left to pursue a solo career, and at the same time Peterman decided to become a producer, leaving Miller, Turner and Davis as the nucleus of the band.
With the addition at various times of Ben Sidran from the Marksmen, and British session-star Nicky Hopkins, both playing keyboards, 1969 produced 'Brave New World' and 'Your Saving Grace', before Turner left at the end of that year to be replaced by Bobby Winkelman, while Hopkins threw in his lot permanently with Quicksilver Messenger Service, and Sidran left to become a producer, in which capacity he assisted Miller on the 'Recall The Beginning' album three years later. 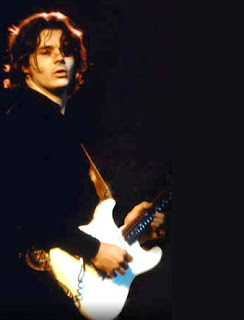 Miller's initial sound was marked by a fusion of Psychedelic Rock with Blues Rock, which contained heavy jamming, improvisation and occasional bits of other genres like Country Music and Folk Music. This style, as showcased on every album between Children of the Future and Recall the Beginning, proved reasonably popular and well-received, with a couple of hits in songs like "Space Cowboy" and "Living in the USA", decent chart placements, and positive reviews.
After attempting to record an album in San Francisco, Miller took Davis and Winkelman to Nashville, where they completed Number Five, released in July 1970, with the help of the celebrated Nashville sessioneers. After that, Davis left to launch a solo career, and Winkelman returned to the sessions from which he had come, their replacements being Ross Vallory (bs) and Jack King (drms).
This combination recorded Rock Love, with occasional assistance from David Denny (gtr), and lasted until the end of 1971, when Recall The Beginning ... A Journey From Eden was recorded, with a nucleus of Miller, Jack King (drms), Dicky Thompson (kbds), and Gerald Johnson (bs).
At around the time it was released, Miller became seriously ill with hepatitis, and after a layoff of six months re-convened the band, with John King replacing his namesake Jack on drums, and Lonnie Turner standing in for Gerald Johnson, who was also ill, plus Miller and Dicky Thompson.
This combination, approximately the seventh Steve Miller Band, recorded The Joker, which became Miller's biggest album, with the title track reaching No. 1 in U.S. singles charts.
In May 1974, Miller decided to take a year off after almost nonstop gigging for nearly eight years, and little was heard from him during 1975, with the exception of a British visit with a pickup band for a festival appearance. 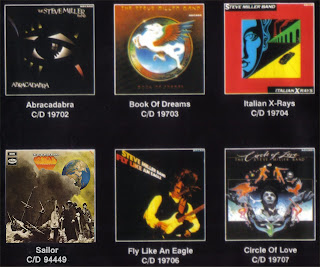 .
In 1976, Miller issued 'Fly Like An Eagle', an album of straightforward rock numbers that, with the aid of bestselling singles such as "Rock 'n' Me" and the title-track, went platinum, proved his strongest commercial offering ever, and enabled him to reach new heights of popularity. Back in harness with a regular band (Lonnie Turner (bs), David Denny (gtr), Gary Mallaber (drms) and Norton Buffalo, ex-Commander Cody (hrmonica)), Miller toured throughout the year. His eagerly-awaited follow-up, 'Book Of Dreams', proved uncomfortably similar to Fly Like An Eagle, but it shipped gold anyway.
Almost four years elapsed before the low-key 'Circle Of Dreams' was released, but just six months later 'Abracadabra' emerged to resurrect his career once more, the title track reaching Number 1 and 2 in the US and UK respectively. 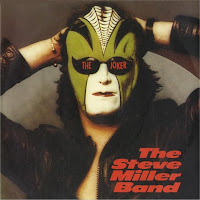 Subsequent albums saw a gradual decline in sales, until 'The Joker' became a UK Number 1 for the second time in 1990, following its use in a Levi jeans commercial. At its best, Miller's blend of rock and blues was a potent brew.
The band's popularity entered a downward slide after Abracadabra, and they eventually retired from making albums after 1993, but they still tour every now and then.
They finally emerged from their hiatus in 2010 with a new Cover Album, Bingo!.   [extracts from 'The New Musical Encyclopedia Of Rock', Salamander Press, 1977 p158, Wikipedia]
. .
Review 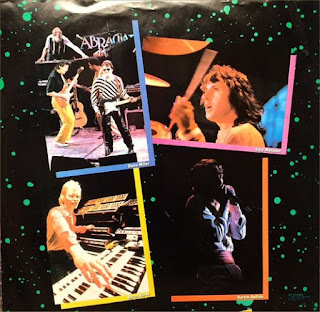 Originally released in 1983, (and released again in 1988 and 1993), Steve Miller Band: Live! is culled from a concert, or several concerts, that Steve Miller Band gave on the supporting tour for 'Abracadabra'. They run through all the big hits -- the most obscure this gets is "Mercury Blues," from their most popular album, 'Fly Like an Eagle' -- in performances that pretty much stick to the record. There's not much here that's different and, accordingly, there are zero revelations, but this is still  pleasant and enjoyable to listen to.
There's no real reason to race out and hunt down this record, since it isn't really infused with much live energy, but once it's playing, it's easy to get sucked into the Greatest-Hits set list. By the way, the town where Steve Miller Band performed is not listed in the liners, but the crowd does give a hearty cheer for "Detroit City" in "Rock 'n Me," which therefore implies that's where it was cut.
Further research shows that this concert was recorded at Pine Knob Amphitheater, Detroit, September 25, 1982 and released April 1983. It's Top Billboard Chart Position was #125 (7 weeks)
.
This post consists of MP3's (320kps) ripped from my CD copy and includes full album artwork for both vinyl and CD, and label scans.
. 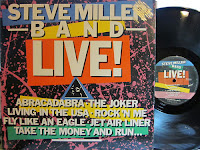 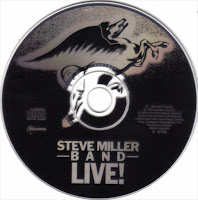