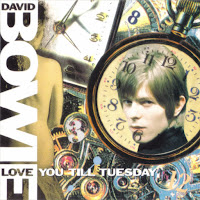 On January 10th, the world mourned the loss of music innovator David Bowie, who lost the battle to liver cancer at the age of 69. Born and raised in Brixton, South London as David ("Davie") Jones, he changed his name to Bowie early in his career to avoid confusion with Davy Jones of The Monkees. From singer, songwriter, multi-instrumentalist, record producer, arranger, painter and actor, Bowie was a trailblazing figure in pop culture for over four decades, and a pioneer of glam rock in the 1970s.

Bowie had been struggling for years to achieve some semblance of commercial and artistic success as a musician, a journey that included stints as a blues-singer for mod-rock groups such as The King Bees and The Mannish Boys, a campy dance-hall dandy with a taste for Anthony Newley, and a Dylan-esque folksinger. While all of these musical incarnations failed miserably, it was, strangely enough, Bowie's participation in an avant-garde mime troupe that put him on the pathway to the kind of success he so badly craved. In 1968, now a solo mime artist, Bowie opened a show for Marc Bolan's Tyrannosaurus Rex, and in the process, ended up crossing paths with Bolan's producer Tony Visconti.

Visconti's account of their initial meeting: "I met David about a month after Marc [Bolan] and I remember the weather. It was a nice day, I was in David Platz’s office at 68 Oxford Street and he played me Bowie’s first Deram album, saying, 'What do you think of this kid?' I said, he’s all over the map.' You know that album, 'Uncle Arthur,' 'Mr Gravedigger' and so on, crazy songs, 'Laughing Gnome'? I said, he’s great but so unfocused.' And he said, 'Come and meet him, he’s in the next room.' David was about 19 at the time, very nervous sitting there. He knew he was going to meet me, it had all been set up, and David Platz left us after five minutes. We got on very well, we shared a love of Andy Warhol, underground music, a group called The Fugs, which few British people were aware of. He was obviously in love with American music and I loved him, he was a singer songwriter, had this great English accent and now we were going to work together. So we took a long walk down Oxford Street, on this nice day, we continued to talk the whole day and about three hours later ended up on King’s Road near a film theatre where Roman Polanski’s Knife In The Water was playing. We’d been talking about foreign films and Truffaut, specifically black and white and scratchy films, so we went in there and we said goodbye at about 7 in the evening. We’d struck up a great friendship." 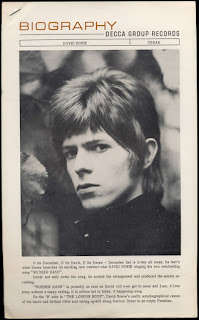 To say this was a fortuitous encounter would be a vast understatement because Visconti proved to be instrumental in shaping the careers of both Bolan and Bowie, as well as helping to foster the birth of the glam-rock movement that would make them both superstars by 1972. At the time of their meeting in 1968, Bowie had managed to record an album for Deram the previous year, but it had failed to chart. As Visconti noted when he first heard the LP, David Bowie is an unfocused pastiche of an album, touching on dance hall numbers, show tunes, British invasion and even novelty songs. What was conspicuously absent was any significant reference to rock music, a much better forum for Bowie's growing avant-garde inclinations. This and the inconsistent songwriting all but sealed its fate with the public. As a result, his days at the label were numbered, and he was unceremoniously dropped in early 1968. However, just before his exit from Deram, Bowie had composed and recorded "Space Oddity," a song destined to eventually bring him his first taste of commercial success, and he had collaborated on a song with Visconti, "Let Me Sleep Beside You," which is arguably his first successful attempt at writing a rock song and a harbinger of what was to come next. Bowie had written a good deal of new material by the time he entered the studio again in 1969, this time on the dime of Mercury Records, to record his second album, now with Visconti as his producer. Among the songs to be recorded was a new version of "Space Oddity," which was obviously influenced by the Stanley Kubrick film, 2001: A Space Odyssey and the impending Apollo 11 moon landing. Bowie had originally written and recorded the song for a promotional film for Deram called 'Love You Till Tuesday', which ended up staying in the can until 1984, when it was eventually released on vinyl by Deram, and then Pickwick on CD in 1992. 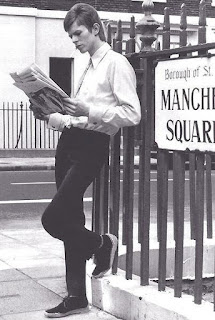 "Space Oddity" was his his first Top-5 UK hit in the late '60s. Released as a single in July 1969, the title and subject matter were inspired by Stanley Kubrick's 2001: A Space Odyssey and introduced the character of Major Tom. The United States' Apollo 11 mission would launch five days later, and would become the first manned moon landing another five days later. Written by Bowie for his promotional film 'Love You Till Tuesday', a longer re-recorded version of the song was included as the opening song for the 1969 album David Bowie (released that November). Upon its re-release as a single in 1973, the song reached #15 on the Billboard chart and became Bowie's first hit single in the US. Still one of his best-known songs, "Space Oddity" was a largely acoustic number augmented by the eerie tones of the Stylophone, a pocket electronic organ played by Bowie.
.
This post consists of MP3's ripped from CD and features artwork for both the Deram Vinyl release and my Pickwick CD release.  I've also taken the liberty of including as a bonus track, the original Demo release of Space Oddity, which is nearly 1min shorter than the 1969 album release.
Although I grew up listening to Bowie during his Ziggy Stardust glam era it is interesting to hear his earlier works and gives one a full appreciation of  Bowie's musical talent and the legacy that he has left behind.
Goodbye Major Tom.......The stars are very different today without you. 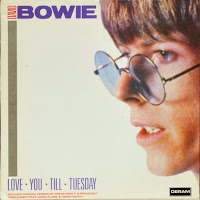 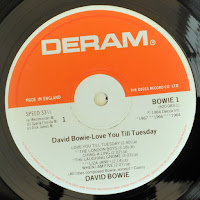