In 1988, The Comedy Company became the most successful comedy program of the decade being the highest rated weekly television program, particularly of note it ran against the Nine Network popular current events show 60 Minutes which shared the same time slot. Much of its success was due to it being the only family entertainment on television on a Sunday night. The Comedy Company remained the consistently highest rating weekly television program for two years.
Many of the stars of The Comedy Company came from a 1985 Seven Network show called 'The Eleventh Hour', which starred Mary-Anne Fahey, Ian McFadyen, Mark Mitchell, Glenn Robbins, Peter Moon and Steve Vizard.   Fahey, McFadyen, Mitchell and Robbins went to The Comedy Company whilst Steve Vizard and Peter Moon went to the Seven Network series Fast Forward.
.
The Comedy Company premiered many famous characters such as 'Con The Fruiterer' & 'Kylie Mole' - both featured here in this month's WOCK on Vinyl. Other characters were Col'n Carpenter, Uncle Arthur and David Rabbitborough. Some of these characters still remain minor Australian icons. Con the Fruiterer, one of the more popular characters appears even to this day on a variety of shows, as does his wife Marika. Comedian Kym Gyngell also created a spin-off series called Col'n Carpenter (1990–1991) based on his character of the same name.
Kylie Mole was also featured in the second series of the ABC's Kittson, Fahey (1993). Notably, Glenn Robbins often did public appearances as Uncle Arthur and on The Panel he often references The Comedy Company by periodically slipping in and out of the character, as well as appearing in full costume as Arthur for The Panel Christmas Special in 2005.
The following YouTube clip will give you a good insight into the light hearted, family entertainment that The Comedy Company offered viewers on Sunday nights, throughout 1988

.
Con The Fruiterer
Con The Fruiter, played and sung by 'Mark Mitchell' was born in Melbourne. He taught secondary school English for five years before becoming an advertising copy-writer and then a professional actor. Mark starred in the pioneering sketch comedy show 'The Eleventh Hour', a predecessor to his hit sketch show 'The Comedy Company'. 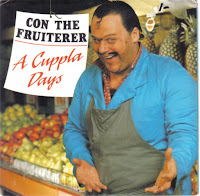 He has made many guest appearances on Australian television series such as SeaChange, Neighbours, Something in the Air, Blue Heelers, Prisoner and Dogwoman. Mitchell's best known character is Con Dickaletus aka 'Con the Fruiterer' whom he created after being served by two Greek Australian stall holders at Glenferrie Markets in 1984.
The character became known nationally from regular appearances in The Comedy Company, Con's catchphrases "cuppla days" and "bewdiful" entered the Australian vernacular.
In August 1989, then Prime Minister Bob Hawke appeared in a The Comedy Company sketch with Mitchell on the premise of presenting Con with Australian citizenship. In reply to Con's question as to when Hawke was going to fix up the country, Hawke took great delight in responding "cuppla days"
In 1988, Con released the single “A Cuppla Days” b/w “The Con Dance”. The two tracks were written and produced by Colin Hay & Greg Ham from the well known Aussie band Men At Work.
. 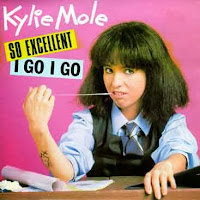 Kylie Mole
Maryanne Fahey (born 19 August 1955 as Mary-Anne Waterman) is an Australian actor, comedian and writer. Fahey's Kylie Mole character – a scowling schoolgirl – was so popular she published the best-selling novel "My Diary by Kylie Mole" and also released the Double A-Side single with tracks "So Excellent" and "I Go, I Go", which hit #8 on the Australian ARIA chart in November 1988. A music video for "So Excellent" was also filmed.
As well as performing monologue comedy segments, "The Comedy Company" also featured Kylie Mole interviewing various celebrities, including Julian Lennon, Sylvester Stallone, the band INXS and Kylie Minogue on the show. Kylie Minogue also appeared in some of the comedy sketches playing Kylie Mole's second-best friend, Rebecca.
.
So, for this months WOCK on Vinyl posting, here are the two Comedy singles featured above (taken from the Comedy Company Album) which I can only describe as:  yes, you guessed it - 'So Excellent'. Thanks goes to Ozzie Musicman for the Kylie Mole single rip and artwork.
.
Comedy Company Singles (MP3/320kps)
.
Posted by AussieRock at 10:47 PM