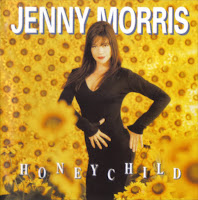 Born in New Zealand in 1956, singer/songwriter Jenny Morris began singing in the Wide-Mouthed Frogs in the late '70s. She joined the Crocodiles in 1980 and moved to Sydney, Australia, with that band in 1981. The Crocodiles disbanded soon after. Morris released a number of solo singles, with her first venture being the theme for the film Puberty Blues, as well as released an album with QED which produced a massive hit with "Everywhere I Go" in 1984.

In 1985, Morris joined INXS as a backing singer for the Listen Like Thieves world tour, before releasing her first solo album 'Body & Soul' in 1987. The album was a success, selling over 70,000 copies in Australia (platinum status), and produced a number of hit singles, including "You I Know," written by Neil Finn. Her second album, 'Shiver', consolidated her position as one of Australia's leading female singer/songwriters by selling over 250,000 copies, although her third album 'Honey Child' was a comparative flop, producing one hit single "Break In The Weather" plus two others that missed the Top 40 completely. 'The Story So Far', a best-of compilation, was released in 1992, but the rest of the '90s saw little of note from Morris, apart from an album called 'Salvation Jane' in 1995. The appropriately titled single “Downtime” arrived in 2002 with the album 'Hit & Myth' following later that year.
In 2004 Listen: The Very Best of Jenny Morris was released, with the Alive DVD landing in 2005. A year later, Clear Blue in Stormy Skies appeared, filled with acoustic versions of some of the singer’s most popular songs. ~ Jonathan Lewis
. 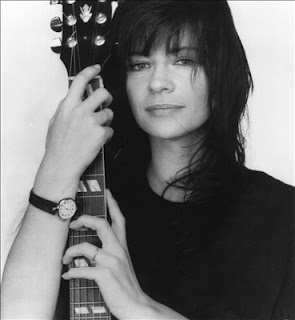 Album Review
Honeychild is the third solo studio album by New Zealand singer Jenny Morris, released in October 1991  by East West Records. The album went for the same style as Morris's other two albums' acoustic pop, with a hint of dance music, and was produced by Nick Launay, with some songs co-produced by Mark Forrester. The album included a cover version of the song "Tempted" by the English band Squeeze.

Honeychild was Morris's second most successful album, after Shiver, peaking at #5 in Australia, and being accredited platinum by ARIA. Morris also received a nomination in the "Best Female Artist" category at the 1992 ARIA Music Awards.

It was always going to be difficult for Jenny Morris to follow the success of 'Shiver', but Honeychild was not the way to go about it. Honeychild continued in the same vein of sunny pop that her previous two albums had exploited. However, by the time this album was released, it was starting to wear a little thin. The biggest single from this disc, "Break in the Weather," is a re-write of Shiver's "She Has to Be Loved," yet it's still the disc's best track; an indication of the quality of the rest.

.
STOP PRESS
ARIA award- winning singer Jenny Morris revealed today (Sunday 13th October, 2015) that she has a rare neurological disorder that has forced her ro stop performing. Morris, 59, has spasmodic dysphonia, which causes spasms in the larynx.
The condition means Morris is no longer able to sing and has forced her into retirement from the stage.
“I sound like a 50-year-old crone who’s been smoking three packs a day for 30 years, and not in a sexy way,” she told a Herald Sun Reporter. “I have no idea whether I will sing again. At this point, I can’t see that I would want to charge people to hear me sing.” 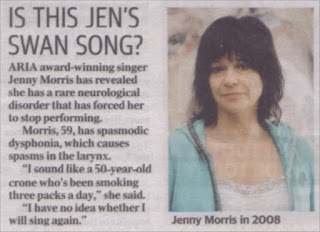 Morris first began noticing 10 years ago that her singing voice was not performing the way she wanted it to. Her speaking voice soon began to sound “croaky”, forcing Morris to seek professional medical help.
Morris said the diagnosis was “a terrible loss” for someone who has been singing all her life, but she will remain active in the music industry. “I think having issues with my voice is not a reason to shy away from the world,” she said.

“It’s just a glitch and it’s not a good enough reason not to do what you’re passionate about.” While speech therapy brought some relief, Morris decided a performance at Sydney’s Taronga Park Zoo would be her last.
These days, Morris continues to chair the board of the Australasian Performing Rights Association (APRA) and is also the co-founder of an annual event called The Art of Music, which brings together some of Australia’s top artists and musicians to raise money for music therapy.

“Jenny came out of nowhere with the most succinct and beautiful idea for such an important cause, and it has brought a whole community of people together,” said award-winning artist Ben Quilty, who’s participated every year since the event’s inception.
“It’s hard not to think that Jenny was even unconsciously aware that the charity she supports is giving [disadvantaged people] the ability to communicate… She must feel a huge sense of achievement out of that. If she doesn’t, she’s mad. We all see it and the arts community sees her as a real hero.”

I'm sure that anyone who has heard Jenny sing will agree that this latest news is a blow to the Australian Music Industry and that our thoughts go out to Jenny while she deals with this debilitating illness.
.
This post consists of FLACs ripped from CD and includes album artwork for both LP and CD.  While listening to this album, appreciate the wonderful vocals of Jenny Morris and the musicianship of her backing artists, including Andrew Farriss (INXS), Chong Lim, and Lindsay Fields (John Farnham).
.
Track Listing 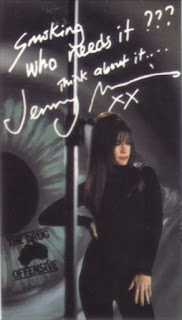