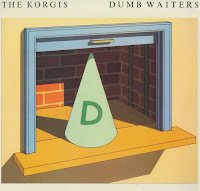 In the beginning there was Stackridge, formed by Andy Davis, James Warren and a few other eccentric Bristol-based chums in 1969. Unclassifiable and unashamedly eclectic, this constantly evolving musical collective ploughed their own highly original furrow through the self-indulgent heyday of Progressive Rock. Too diverse and unconventional to attract mainstream recognition Stackridge did however notch up one very notable achievement: they impressed legendary Beatles producer George Martin enough for him to record their finest album, The Man In The Bowler Hat (1973).

Even though the band followed this brush with stardom by performing at Wembley stadium with Elton John and The Eagles in 1974, two years later disillusionment had set in and Stackridge officially threw in the towel. Andy remained in London doing session work and pub gigs while James opted for an altogether more laid-back lifestyle in Bath.

The two remained in touch though, occasionally posting each other cassette tapes of their latest creations, until finally deciding in the summer of 1978 to actually get together in Bath to record a demo.

Recorded in the top-floor apartment of classical composer David Lord, the four new songs attracted the attention of Nick and Tim Heath, sons of the celebrated 1940s bandleader Ted Heath, who had recently left E.M.I. to set up their own publishing company. Nick and Tim were especially convinced that one tune had great radio-friendly potential: If I Had You. Persuading record companies of this however proved to be well-nigh impossible and so the idea was inevitably mooted, “why not form your own record company?” And thus was born Rialto Records.

Andy and James were immediately given the green light to get to work on an album’s worth of new material and after five months of intensive writing and recording released their debut as The Korgis in 1979.

The album was an interesting amalgamation of influences: the Beatles-esque melodicism of "I Just Can’t Help It" and "If I Had You", the quirky stripped-down New-Wave rock of "Young ‘N’ Russian and Chinese Girl" and the wildly eccentric Stackridgian wordplay of "Dirty Postcards" and "Mount Everest Sings The Blues".

The critics loved it, Radio One D.J. Tony Blackburn played "If I Had You" to death and before they knew it, after ten years of trying to make it in the musicbiz, Andy and James suddenly found they had a top twenty hit. The boys now made an unfortunate ‘error of judgement’. They decided to remain a mysterious ‘studio-only’ band and eschew live performances. 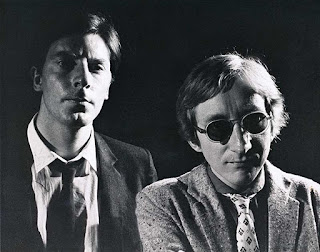 The Buggles had probably set the precedent for this attitude and after six years of continuous country-wide touring as Stackridge, staying in one place simply writing and recording probably seemed very appealing indeed. But it did turn out to be a mistake. The Korgis never really secured a strong profile and despite the global success that was just round the corner, didn’t make that all important connection with the record-buying public.

The global success came in the form of the modern-day classic "Everybody’s Got To Learn Sometime" from the second Korgis album, 1980’s 'Dumb Waiters'. Again written and recorded in Bath with producer David Lord, Dumb Waiters largely continued where the first album left off but perhaps with a more self-consciously commercial orientation. "Everybody's Got To Learn Sometime" reached #5 in the UK in 1980 and #18 in the U.S. The song topped the charts in both France and Spain and featured on the Korgis second studio album Dumb Waiters which peaked at #40 in the UK album charts.

Alongside the worldwide smash "Everybody’s Got To".. there were some notable highlights: "Perfect Hostess", "If It’s Alright With You Baby" and "Rovers Return"; the homages to Blondie: "It’s No Good Unless You Love Me" and "Dumb Waiters" and perhaps the menacing Mean Streets rock of "Intimate". The odd thing about the album is the fact that Andy is largely absent. 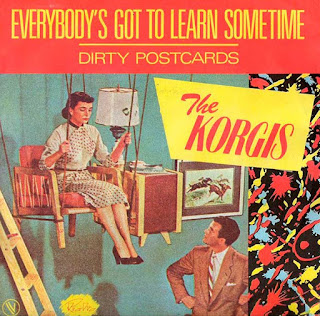 The pressure of trying to capitalize on unexpected success, fundamental disagreements on how to present and arrange the new material, plus the exhaustion of intense and claustrophobic recording resulted in Andy walking out on the project half-way to completion.

Neither James nor Andy knew if this abandonment was to be temporary or permanent but James carried on regardless, having no choice but to try and sing over the backing tracks already recorded in keys geared to Andy’s lower registers. The results are less than convincing but at least the album was finished.

Andy and James were still estranged for the making of 'Sticky George', the band’s third album (1981). James continued to work with session players Phil Harrison and Stuart Gordon as he had on Dumb Waiters, but with much background tension induced by suspicious record-company wheeling and dealing, not to mention the unenviable task of trying to emulate the massive recent success of Everybody’s Got To.. the now solitary Korgi experienced an out-of-character meltdown.

There was an acrimonious bust-up with Phil and Stuart and a very noticeable loss of artistic direction with the music. The edge and eccentricity of the first two albums had disappeared and what remained was a bit of a watered-down ‘Fleetwood Mac meets Paul Simon’ hodge-podge. However, "Can’t We Be Friends Now", "That Was My Big Mistake", "All The Love In The World" and "Living On The Rocks" are very pleasant examples of Korgi balladeering and for these alone the album is not to be overlooked. 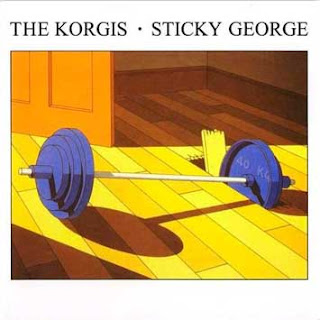 Next followed a rather unexpected episode: in 1982 James recorded a one-off Korgis single with trend-setting producer Trevor Horn.

"Don’t Look Back" featured Ann Dudley on keyboards and Mel Collins on tenor sax - James once again in Paul Simon mode with a delicate, introspective ballad.

Unfortunately, Trevor’s involvement still didn’t achieve the hoped-for chart action and as with Stackridge a decade earlier, The Korgis having come to a bit of a dead end were effectively put to bed for the next seven years.

By the early 1990s Andy Davis had toured the world twice playing keyboards for Tears For Fears, while James Warren had been content to tour the pubs and wine-bars of Bristol and Bath performing Simon & Garfunkel and Beatles favourites with his old friend John Baker (who used to sing with Roland Orzabal before the latter went on to form Tears For Fears).

Andy now had his own studio space in Bath (shared with Will Gregory later of Goldfrapp fame) and the idea of recording a new Korgis album gradually took shape - but this time the band would be a trio.

The voices of James and John Baker blended very smoothly together and John’s easy-going presence would provide a welcome counter-balance to the fractious intensity of Andy and James’ working relationship. That was the theory behind John Baker’s involvement in the new project and it worked very well. The album that eventually emerged from Andy’s ‘Doghouse’ studio, This World’s For Everyone (1992), was a definite return to form. 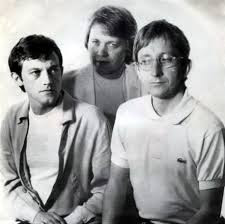 The influence of World Music was evident on the title track, "One Life" and "Third Time Around". The massed chorus harmonies, acoustic rhythms and latin percussion of "One Life" were redolent of Crosby, Stills & Nash while "Wreckage Of A Broken Heart", "Who Are These Tears For Anyway?" and "Hunger" with their lyrical explorations of the darker side of sexual relationships, demonstrated once again the incredible musical versatility of the band.

For the first time also there were collaborations with ‘outside’ writers: Helen Turner, keyboardist with Paul Weller, penned two soft rock contributions with Andy Davis, "Show Me" and "Love Turned Me Around". Basically this mature Korgis collection seemed to effortlessly cater for every ‘Adult Orientated Rock’ taste.

What have Andy and James been up to since the year 2000? Andy started the new millenium as a high-flying session player once again, this time touring the world as keyboard player for Goldfrapp.

James by contrast had become the father of twins at the age of 48 and so music-making was understandably not his chief preoccupation.

However, 2005 and 2006 saw two fine additions to the band’s discography, The Korgis Kollection and Unplugged, released on independent label Angel Air. The Kollection had the added bonus of featuring new specially written tracks: Andy’s taut, electronic "Find Yourself Another Fool", James’ "Come To Me" - sounding like something John Barry might have written for a James Bond movie - and two John Baker- James Warren collaborations, "It All Comes Down To You" and "I Wonder What’s Become Of You". 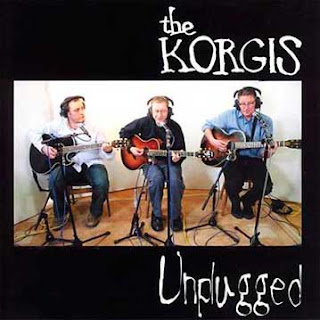 The Unplugged sessions are well worth checking out, with Andy, James and John Baker performing excellent stripped-down renditions of all the well-known Korgis tracks plus a previously unheard "That’s What Friends Are For" and the seldom-aired "Lines" and "It Won’t Be The Same Old Place".

As far as live performance was concerned, Andy and James returned to their Stackridge roots. They hit the road around 2007 with several permutations of personnel, eventually settling on a very serviceable five-piece combo they’ve continued to tour with up until the time of writing (2014).

Andy has simultaneously been performing with his own acoustic trio DLM (Davis, Lindley and Mullan) while James plays weddings, parties and corporate events with The Meanies function band. And how about The Korgis appearing live? Amazingly, Andy and James plan to make that happen at a venue near you in 2015.

It’s only taken them 35 years to get round to it, but they’re confident it will have been well worth the wait. [extract from Korgis Website, bio by Gavin Mulhoney, June 2014]
.

This post consists of FLACs ripped from my prize vinyl. I remember buying this album from the Melbourne University book shop, having heard their hit single on the radio that same day. Talk about impulse buying hey. When I played the album in my dorm room that night, I must have driven my mates nuts....I just played it over time and time again.. it was brilliant. Besides their hit single my favourite tracks are Intimate and Rovers Return.  This is a classic album, not to be missed. I'm only surprised it is not listed in Michael Lydon's (founding editor of Rolling Stones) book '1001 Albums you must hear before you die'!  As usual, full album artwork and record label scans are included.
. 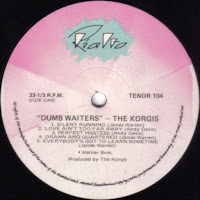 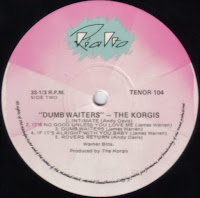