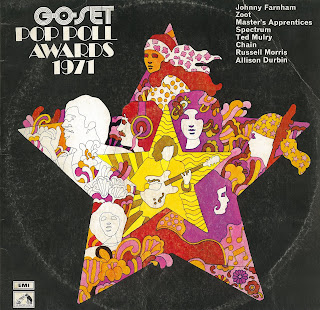 Go-Set was the first Australian weekly newspaper which focused on Australian teenage popular music, culture and fashion.  Its role was to bring these aspects of Australian life to its readership, Australian youth aged between 14 and 20 years old.  In performing this role it also established and developed as an institution through which rock music journalists and writers in popular culture could flourish. Go-Set was able to provide this environment while being produced and published independent of the other mainstream presses at the time.

It was the first sixties newspaper to explore an emerging and developing Australian popular music industry.  Go-Set did not remain locked in its 1960s persona and shifted its appearance and musical tastes to keep up with the changes that were taking place within its areas of interest.  The dynamics of these changes were so strong that by the early seventies Go-Set was a significantly different paper in appearance to what it had been in 1966. Its decline and demise in 1974 was as much a condition brought on by crisis as had been its life in keeping in touch with, and reporting on the state of the Australian and overseas music and fashion. [extract from Milesago "Life and Death of an Australian Pop Magazine", by David Kent]
.

.
Australian Pop Awards
In Australia, Rock Music Awards have had a somewhat haphazard existence. Looking back on the 1967 King Of Pop Award, Ed Nimmervoll wrote:- 'Normie Rowe was the first King Of Pop, although accidentally rather than officially. "Go Set" was the big teen magazine of the day and in 1967 they conducted a standard pop poll to arrive at the most popular personalities and groups of the day .. When those awards were announced on the Go!! Television Show, in a moment of fun it was decided to close the show with a mock crowning of the King Of Pop'. (from Juke Magazine, 28 October 1978).

Such was the beginnings of the king of pop awards which evolved into the T.V. Week King Of Pop Awards (also known as the T.V. Week Rock Awards). But well before all that was the National Battle Of The Sounds.
The Battle Of The Sounds was the most important event of the year for Australian bands during the late sixties and early seventies. Apart from the prizes (which included trips to the UK, and the US and cash), the contest was highly respected and being judged top group in the country for the year was a great honour.
The major prize was awarded following a series of semi-finals held on a country area and state level. Hoadleys were the main organisers and sponsors.
.
National Awards Show Trend To Australian Talent
(Article from Billboard Magazine, August 7, 1971)
Sydney, Australia - The 1971 National Pop Poll Awards conducted by Go Set magazine for the past six years and now televised nationally, showed a marked trend towards original creative music reflected in the mushrooming success of the local industry over the past twelve months. 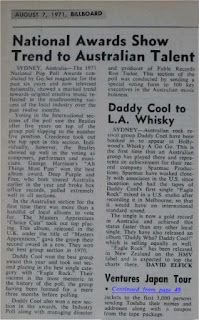 Voting in the International sections of the poll saw the Beatles after five years on top of group poll slipping to the number five position. Creedence took out the top spot in this section. Individually, however, the Beatles showed up well in the voting as composers, performers and musicians. George Harrison's 'All Things Must Pass' won the best album award. Deep Purple and Free, who both toured Australia earlier in the year and broke box office records, polled extremely well in all sections.
In the Australian section for the first time there was more than a handful of local albums to vote for. The Master's Apprentices 'Choice Cuts' took out top placing. This album, released in the U.K under the title of 'Master's Apprentices', gave the group their second award in a row. They previously won the best group section in 1970.
Daddy Cool won the best group award this year and took out second placing in the best single category with "Eagle Rock". Their success is the most meteoric in the history of the poll, the group having been formed for a mere three months before polling.
Daddy Cool also won a new section in the awards, the Industry Poll along with managing director and producer of Fable Records Ron Tudor. This section of the poll was conducted by sending a special voting form to 300 key executives in the Australian music business.
.
This post consists of FLACs and MP3's (320kps) ripped from my precious vinyl, which is in extremely good condition considering its age. Full album artwork and label scans are included as usual. This album was given to me by a close friend recently, in amongst a box load of Aussie LP's and 45's.
While researching the Go-Set Pop Awards it became apparent that this release was missing an important track from the most popular band in 1971, as voted by the Go-Set readers - Daddy Cool's "Eagle Rock"
Why Daddy Cool wasn't featured on this album is a mystery - perhaps there were problems getting SPARMAC to release it to EMI for inclusion.  So I have taken the liberty of including "Eagle Rock" as a bonus track.  This is a great compilation of classic Aussie hits from the start of the 70's and was a fitting tribute to the home grown musical talent that was starting to emerge amongst the well established International acts.
If you're interested in viewing some more Go-Set magazine covers, take a look at the Go-Set Magazine website
. 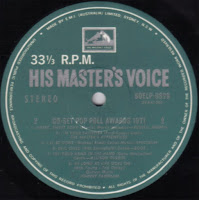 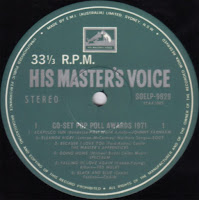