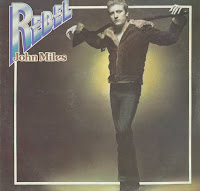 Born April 23, 1949, in Jarrow, John Miles was no overnight success. A singer and guitarist who also plays piano, he played with local bands in the Newcastle area for several years before leaving to try his luck in London. His luck wasn't good: leading the John Miles Set, which he had formed in Jarrow in 1970, he released a string of undistinguished singles on manager Cliff Cooper's Orange label before it was decided to trade in Miles' effete hairdresser's- apprentice image and reincarnate him as a blond "James Dean" - this despite the massive incongruity of his material and despite his total physical unsuitability to the part. 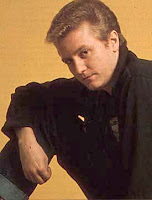 Nevertheless his singles, "Highfly" (first released in U.K. 1975) and "Music" (1976), both artfully crafted slices of MOR Pop-Rock of equal parts catchy riff and melodramatic arrangement, at last gave him hit singles and a following on both sides of the Atlantic.
His single "Music," truly established him and gave him tours with people like Elton John, the Stones, and Jethro Tull, and was one of the best songs and records of 1976. And he had his own show at the Apollo in Glasgow to prove it. His album, "Rebel," was in the U.K top ten for four months, a quite astonishing achievement.
.
Music Maker Interview (1976)
[Author Unknown]
When John Miles hit our charts with "High Fly" towards the end of last year, more was said of his James Dean appearance than his music, and John found that people were expecting him to live up to the rebel image of the mean, moody and arrogant star. But that was never the real John as Robin Tucek discovered when he interviewed him recently. John did choose the image, but that was built-up only to complement the music. If the soft spoken, polite 26 year old from Jarrow was going to take his chance of stardom when he heard that "High Fly" was in the charts and TV appearances had been booked, he would have to make a quick decision. Up till then John had had long, shoulder length, blond hair (pictured left) but that took the chop from the barber's scissors and in came the Jimmy Dean haircut and with it the image, although that was an afterthought. Then came "Music", destined to be one of the sounds of 1976. 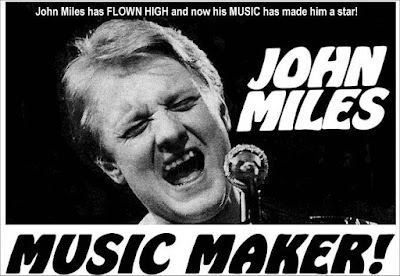 In all that time, did you ever think of giving up?
"I only once thought of packing it all in. That was about three years ago, during a period when nothing was happening at all - that was when I started thinking about moving away from Newcastle. Bob was keen on the idea, but it took me about six months or so to make up my mind, then we moved to London. I wish we had done it sooner." In London, John lives with his wife, Eileen, in a flat in Highgate, although he is now looking for a house.

How long have you known Bob Marshall, and how important an influence have you been on him?
"I've known Bob for about four years now, and we've been writing together for about three of them. Bob's a great influence on me, because basically I'm a bit lazy. He's pushed me along. Bob is a Sunderland fanatic, and we both used to go and watch them nearly every week. He still does! In fact, he even bought his car from Sunderland's Billy Hughes. Bob lives with us in London, and he's unbearable if Sunderland lose - if they win, he's ecstatic! "After Sunderland had won the F.A. Cup in 1973, my Dad gave him a mug with the dates Sunderland won the cup on it. My Dad's a Newcastle supporter, and he bought me one with their winning dates on it. That didn't please me however, as Newcastle have won it six times to Sunder land's two! 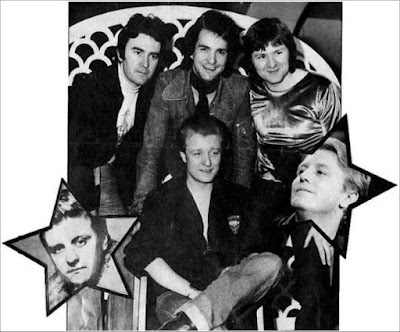 Which do you prefer - appearing on TV or in front of a concert audience?
"I find TV appearances, especially "Super-sonic", more nerve racking than performing live at a concert. You go over your number so many times that, when you finally get to record the show, it's easy to panic. When you're appearing on TV. you're in the Studio for a long time. You can even be there at 10 o'clock at night if things are running late. Once your audience has accepted you at a concert, you can relax.

You write with Bob, but do you find writing songs comes naturally, or does it take a lot of time shut away?
"One day I find it easy, but there are others when I just can't seem to begin."

How would you describe the music you write?
"That's difficult, but I prefer songs to be melodic like Paul McCartney and Stevie Wonder, but I wouldn't really like to compare my songs to those they write."

When did you first take an interest in music?
"I started playing the piano when I was five. It was the usual thing, my parents sending me to a classical music teacher, but I didn't really enjoy it. I wish I had carried on longer then and learn't more. It wasn't until I was at grammar school that I started to take an interest in the classics, and I feel that they have influenced me subconsciously." 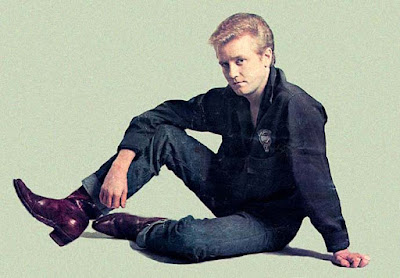 You used to play soul music, and had admitted an influence from Stevie Wonder. Now that you have developed your own style of music, do you see its direction changing again?
"Certainly as far as singing goes, I was very much influenced by Stevie Wonder, but if was not a conscious thing. I like the idea of having the backing of a full orchestra, with lots of violins. I hope other artists will record our material; it keeps you fresh if you don't only write for yourself. It's not a good thing to do that."

"Rebel" has won acclaim with the critics, but are you happy with the album itself?
"Yes, I'm happy with it. It was the sort of album I wanted to do. I've never been one of those musicians who could play rock all night - I like variety in music. It's the same when listening to albums. That's why we've tried to put plenty of variety in ours."

So what has John Miles got in store for us now?
"At the end of May, the band starts a British headline tour, covering major towns, and there should be another album out in the Autumn." If that album is as good as "Rebel", then John Miles and Bob Marshall will find that everyone wants to record their songs, which will be nice. Their talent is enormous and they deserve their success - certainly no music critic can deny it to them!
. 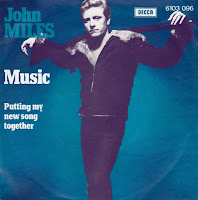 Album Review
(by Stephen A Carson)
The first track is "Music" and is only one of two tracks, on the album, penned by John without Bob. Melody Maker said that "Music is a dynamite track, one of those tunes you find yourself humming and loving - then hating for its familiarity." In a way I believe Music is John Miles albatross, the one song he is pigeon holed with against which all his other work is measured.
"Everybody wants some More" is more often than not referred to as reminiscent of the early Kinks or the Beatles. My view is of the latter with its "multi-flavoured vocals and good tempo changes" per Jester with touches of "Yellow Submarine" (megaphone effects) per Melody maker.
"You have it all" was described by Rolling Stone as bathing "Yes-styled modal fragments in lush orchestration. I have no idea what that means but I like it.
"Rebel" & "Highfly" have already been touched on. However, Rolling Stone states "Rebel dramatically interposes a Tango for electric guitar and synthesiser with a string quartet." While Melody Maker called it " a chunky, beefy scorcher." 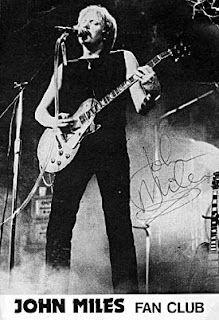 "When You Lose Someone So Young" is a very strong track lyrically. As such some reviewers have criticised it for too much backing as it could be a stand out song with just an acoustic guitar. While I do not wholeheartedly agree I can see the point especially as it would have made it a contrast to the rest of the album. There are shades of fellow Geordie Alan Price and also Elton John in this song.
"Lady of My Life" makes me think of Stevie Wonder, who I know is one of John's musical influences. This was also picked up upon by almost every review I have read. It is "softy and delicate" to quote Melody Maker and there is a terrific sax solo by Phil Kenzie. It is the 2nd song written solely by John and it is beautiful. I think he probably wrote it for his wife, Eileen.
"Pull the Damn Thing Down" is apparently reminiscent of the Kinks per Record World. I agree with Melody Makers view that it "His guitar solo is a killer, refreshingly lacking in clichés". Earlier in their review they describe the track as "a blazing commentary on the pollution of the environment by the architectural planners". I am sure that I have read that one of the influences for this song was his own background as his parents live in the High Street in Jarrow, an industrial town in the North East of England, where there was a lot of redevelopment.
Hopefully the impression I have given you was that there were few criticisms of Rebel or of John and plenty praise and expectation of great things to come. His biography at the time placed him with the "new" songwriters of the time, Leo Sayer and David Essex as well as noting similarities with established British songwriters, Bowie and Elton. Even Noel Edmonds, in his time as a BBC Radio 1 DJ had Rebel as his album of the week. Billboard magazine said, "Miles could potentially fill the gap that has long existed between some of the more electronic rockers and AM play". Almost as an after thought they ended with "Good guitarist as well". What an understatement!
So it got good write-ups. But did it sell? For a debut album it did really well peaking at number 9. In the states for a time it was retitled "Highfly" after his first hit but did not match its UK success. One of John's prize possessions is the gold disc he received (presented to him by Jimmy Saville a UK disc jockey) for the sales achieved. [extract from Stephen Carson's website]
.
Ripped from my trusty Vinyl, this post consists of MP3 (320kps) and includes full album artwork for both LP and CD.  This album has been long deleted and finding digital copies on the net is near impossible, and thus the reason for this post.  I purchased John's hit single back in 1976 but stupidly sold it at a record fair, and now regret not having the non-album B-Side "Putting my new song together".  As an added bonus, I'm including a YouTube rip of a recent rendition of "Music" from Night of Proms, 2012 as a bonus track and only confirms that he still has the goods - a ripper version indeed.
The lyrics to Music are special to me and speak volumes to what this blog is all about.....


Music was my first love
And it will be my last,
Music of the future
And music of the past.

To live without my music
Would be impossible to do,
In this world of troubles
My music pulls me through.
Track Listing
01 - Music
02 - Everybody Wants Some More
03 - Highfly
04 - You Have It All
05 - Rebel 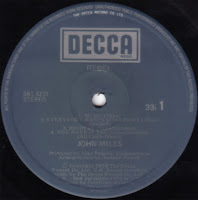