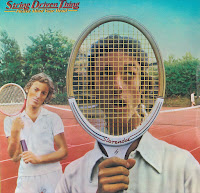 One of the finest bands signed to the Charisma label during its early-'70s heyday, Scotland's String Driven Thing originally formed as a trio in 1969, led by the husband-and-wife team of Chris and Pauline Adams, plus percussionist John Mannion. Locally popular at the tail end of the 1960s, the band faded from view shortly after releasing a self-titled debut album in 1970. They continued playing, however, with the lineup expanding to include bassist Colin Wilson.

In early 1972, Chris Adams journeyed to London, hoping to interest the Strawbs' management with a three-song demo. Finding himself with some free time, he was flicking through the record labels section of the Yellow Pages when he spotted Stratton Smith Enterprises. He called and found himself in conversation with the head of Charisma chief Tony Stratton Smith's publishing company, Mooncrest Music. Within a week, Stratton Smith himself was in Glasgow, for a String Driven Thing showcase at the Burns' Howff pub; a week after that, the band signed with his label. 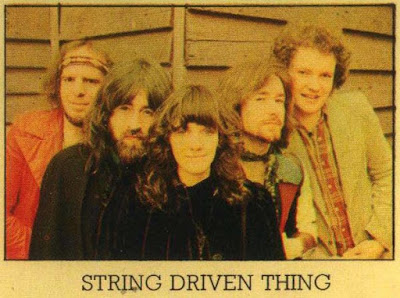 Shedding Mannion around the same time, the group returned to Glasgow with a princely retainer of 20 pounds per week, to rehearse. A month later, they went back south for their first ever live shows as a "signed" band: a community hall in the town of Tunbridge Wells, where Strat had his country retreat, and the 1972 Reading Festival. It was an audacious entry, but it worked and the group quickly set to work on its first Charisma album, to be titled — like its independent predecessor — String Driven Thing.
Recorded in two weeks in August 1972 with producer Shel Talmy, the album landed rave reviews across the music press, with Melody Maker in particular leaping onto the group's side. (Amusingly, it later transpired that the album's distinctive gatefold sleeve, designed by Po of Hipgnosis, cost more than the actual recording sessions!)

The band continued pushing forward. Visiting France, they stopped by the renowned Chateau D'Heuroville studios (the Honky Chateau of Elton John fame), where they were filmed recording some songs with a French producer, who later claimed he'd done a better job than Shel Talmy ("he had a point," mused Adams); December 1972, meanwhile, saw the band fly to New York to support Genesis at that band's first ever American show, at the Philharmonic Hall.

When Chris and Pauline Adams left String Driven Thing after the release of "The Machine that cried", the heart of the band essentially went with them. To his credit, Grahame Smith rebuilt String Driven Thing from scratch, but the truth was that this was a completely different band using the same name (per Fleetwood Mac). The new line up recorded two albums - 'Please Mind Your Head', recorded by engineer Tony Taverner at Escape Studios in Kent, and 'Keep Yer A'nd On It', produced by Andy Johns at Island's Basing Street studios.

Vocal duties were taken on by Kim Beacon (here referred to as Kimberley) who was the principal vocalist on Tony Banks' first solo album. Beacon's vocals represented a fundamental change from those of Chris and Pauline Adams, implying an immediately apparent change of sound for the band. This, combined with a general move towards a more orthodox pop rock direction alienated many of String Driven Thing's original fans.

Things start off brightly enough with "Overdrive" a mid-paced pop song with a fine harmonic chorus.. Songs such as "Without you" try to be more adventurous, with Smith's violin and viola contributions moving the songs on. Vocalist the late Kim Beacon was one of the finest rock singers of his day, his voice being a cross between Paul Rogers and Rod Stewart. Standout tracks are "Overdrive", and the instrumental "Timpani for the devil".  This instrumental piece draws in brief classical influences as Grahame Smith gets loose on his violin while drummer Colin Fairley expresses himself...[extract from SpaceRitual] 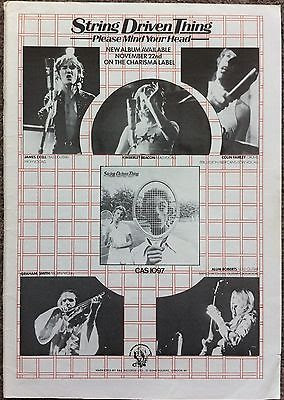 The Break up
Their American tour of 1975 highlighted issues which the new lineup had with continuity and finding an appropriate audience. In October that year, they opened for Lou Reed, after which drummer Colin Fairley left the band and Charisma withdrew their support. Fairley went on to have a career as a studio engineer and record producer, for Elvis Costello and The Bluebells among others. Alun Roberts became guitar tech for Jeff Beck and Stevie Winwood, while Jimmy Exell still plays in Denmark. Beacon sang lead on Tony Banks' solo debut, A Curious Feeling, in 1979 and also had solo material issued. He died in 2001.


All early String Driven Thing, Chris Adams and Graham Smith albums are available on CD (Ozit Morpheus Records). Some live material and some hard to find tracks and outtakes appear on a German CD called Dischotomy with some alternate takes and rare material not found anywhere else. There are several BBC transcription discs of String Driven Thing live performances featuring both line-ups and two of these sets are on a German live bootleg CD called It's a Game.

Reformation and career
After 15 years of silence, Chris Adams released a solo album, The Damage, in 1991 and subsequently reformed String Driven Thing for a German tour, the Berlin leg of which was released on Ozit as $uicide, Live in Berlin. Variations of that band toured sporadically throughout the 1990s, but since 2001 the lineup has stabilised, with Andy Allan on bass, Richard Drake on drums and either George Tucker or Chris' son Robin Adams on guitar, with Pauline Adams and Graham Smith occasionally joining them in concert.

In 2007, the band released Moments of Truth, their first studio album in over 30 years, featuring twelve new Adams songs. April 2009 brought the Americana-tinged Songs From Another Country (released for contractual reasons as String Driven) on Backshop Records. The new material was first heard publicly at Fifestock in March 2009 and their new website was launched at the same time as the album release. In 2010, the Adams's gigged with original member John Mannion to celebrate the first album's 40th anniversary. As 2012 was the 40th anniversary of String Driven Thing's signing to Charisma and touring with Genesis, the band did some English gigs with Graham Smith and Pauline Adams. Bass player Colin Wilson died in 2013. [extract from http://www.nickdrake.com]

.
Album Review by Bad Cat Records
With Grahame Smith the only holdover from the earlier String Driven Things line-ups, the revamped band featured the talents of singer Kimberly Beacon, bassist James Exell, drummer Colin Fairley, guitarist Alun Roberts, and cello player Clare Sealey. With most of the band contributing to the writing chores, 1974's 'Please Mind You Head' found the group shifting towards a more contemporary pop and FM friendly blues-rock sound.  Assuming they'd gotten over the departure of creative mainstays Chris and Pauline Adams, longstanding fans were almost certainly appalled by tracks like the Bad Company-styled rockers "Overdrive", "Without You", and "Black Eyed Queen".

If that didn't get under their skin, then Faces-flavored tunes like "Mrs. O'Reilly" and "Man of Means" almost certainly did.  Seriously, if you'd deleted Smith's violin work, a significant number of these nine tracks wouldn't have sounded out of place on a Bad Company, or Faces album.  As a big '70s AOR fan I didn't find the change in direction all that bad.  Yeah, the revamped band lost much of their unique identify, but Beacon was an impressive singer - criminally overlooked.   Always liked the goofy Hipgnosis album cover ... 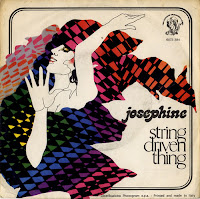 (Side 1)
1. Overdrive   (James Exell - Alun Roberts) - 3:10
With Kim Beacon turning in his best Paul Rogers impression, 'Overdrive' was a surprisingly impressive blues-rock number.  Powerful, tuneful, and quite commercial, it would have made a nice single.
2. Without You  (Kim Beacon) - 4:00
Anyone hearing the rollicking 'Without You' was bound to wonder why these guys were so often dumped under the progressive sales plank.   Once again  Beacon sounded like a slightly easier going Paul Rogers while Alun Roberts displayed some tasty lead guitar chops.   Another track that would have made a dandy FM single.
3. Josephine   (Colin Fairley) - 4:10
Always loved James Bell's churning bass line on this one  ...  nice Bad Company-styled blues-rocker that should have provided the band with a massive AOR commercial success. 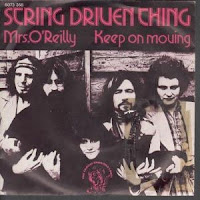 4. Mrs. O'Reilly   (Colin Fairley) - 3:40
There's something about this one that's always reminded me a bit of a Faces track - overlooking Grahame Smith's violin, there was a certain charming sloppiness to the performance that bore more than a passing resemblance to Rod Stewart and company.   The song was released as a single in England and German.
5. Man Of Means   (James Exell - Alun Roberts) - 2:46
'Man of Means' sounded even more like a Faces tune, though this time around the reference was Rod Stewart singing a Ronnie Lane composition.   High compliment in my book.

(Side 2)
1. Black Eyed Queen   (James Exell - Alun Roberts) - 4:43
'Black Eyed Queen' started side two with another enjoyable Bad Company-styled blues-rocker, though the mid-song doo-wop detour was disconcerting.
2. Keep On Moving   (James Exell - Alun Roberts) - 3:18
Decent boogie tune, but nowhere near as impressive as some of the other numbers.  rating: *** stars
3. Timpani For The Devil (instrumental)  (Grahame Smith) - 4:15
Smith's lone composition, the instrumental 'Timpani For The Devil' was unlike anything else on the album - essentially a showcase for his violin, it wasn't particularly melodic, or enjoyable and simply went on far too long.  The album's most progressive oriented tune, but it sounded totally out of place on the album.
4. To Know You Is To Love You  (Syreeta Wright - Stevie Wonder) - 6:25
Technically I guess this wasn't a Stevie Wonder cover since it was actually written and recorded for Wonder's then wife Syreeta Wright and appeared on her 1972 debut album "Syreeta".   Regardless, you seldom hear a good Stevie Wonder cover, so this was one of those isolated exceptions.   With Beacon handling the lead vocals, the band seldom sounded as good as on this blazing blued-eyed soul adaptation.   Strange to say, but slinky and easily one of the album highlights.
[extract from Bad Cat Records]
. 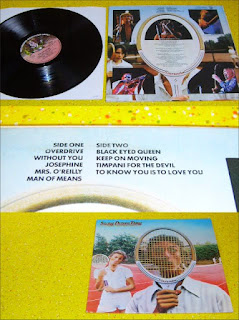 This post consists consists of FLACs ripped from my Bargin Bin Vinyl (yes folks, I paid a mere $1.99 for this album a short time after it was first released, from the bargin bin at Brash Suttons in Geelong. I also remember picking up other bargins like Eric Claptons "E.C was Here" and Dragon's  "Universal Radio" &  "Scented Gardens For The Blind", all for the same price. That was a day I'll never forget).  Of course, full album artwork is included along with label scans - just love that Famous Charisma Label logo !
This was the first time I'd heard String Driven Thing and was pleasantly surprised by their 'fresh new sound' - especially with the violin featuring in most tracks - and what a voice Kimberley Beacon has !
This album comes highly recommended.
. 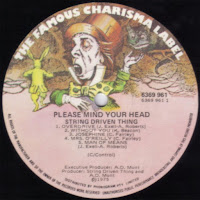 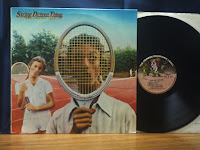 Posted by AussieRock at 7:41 PM