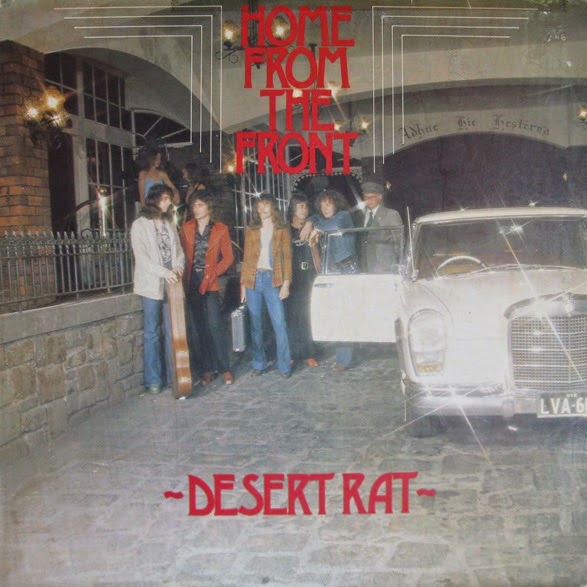 By the time of the album recording only Speldwinde and Dee had survived with new faces included ex-Finch guitarist Skeeta Pereira, former Lois Lane guitarist Stephen Lazaros and bassist Tom Johnson. Lazaros would rename himself 'Smeer' as part of the Punk Rock band Depression.
.
An old friend used to engage in a party game designed to test the wits of unsuspecting houseguests: ambush said visitor with a copy of Blue Öyster Cult’s Secret Treaties LP, and request the back-story to the before/after sketches on the front and back cover. Why does the plane's pilot bear a striking resemblance to Skeletor? Who and/or what is Lopez? How did Eric Bloom’s Alsatians meet their demise? And most importantly, how did five Blue Öyster Cults, four dogs and a skeleton fit into a two-seater jet? 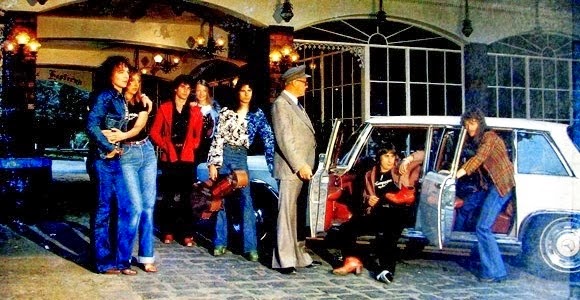 The back cover of Desert Rat’s Home From The Front LP presents a similar vehicular seating conundrum, but the real mystery concerns drummer John Drak. Who slammed his foot in the car door? And why? Perhaps, like most drummers, the guy just had it coming to him.

Though the sepia-tone image on Home From The Front’s inner-sleeve is reminiscent of Secret Treaties (substitute the plane with a tank), that’s where the similarities end. Yes, both bands peddle a brand of ‘70s hard rock, but Desert Rat’s is more leaden and less conceptual. That is to say, it’s kinda plodding and more than a little bit dumb. For instance, Eric Bloom plans to steal your wife, pick your brain and spend your money; in "Rock And Roll Lady", Desert Rat’s Jerome Speldewinde has already had his way with your wife, but rock and roll has made him so brain dead he can’t even remember her name. 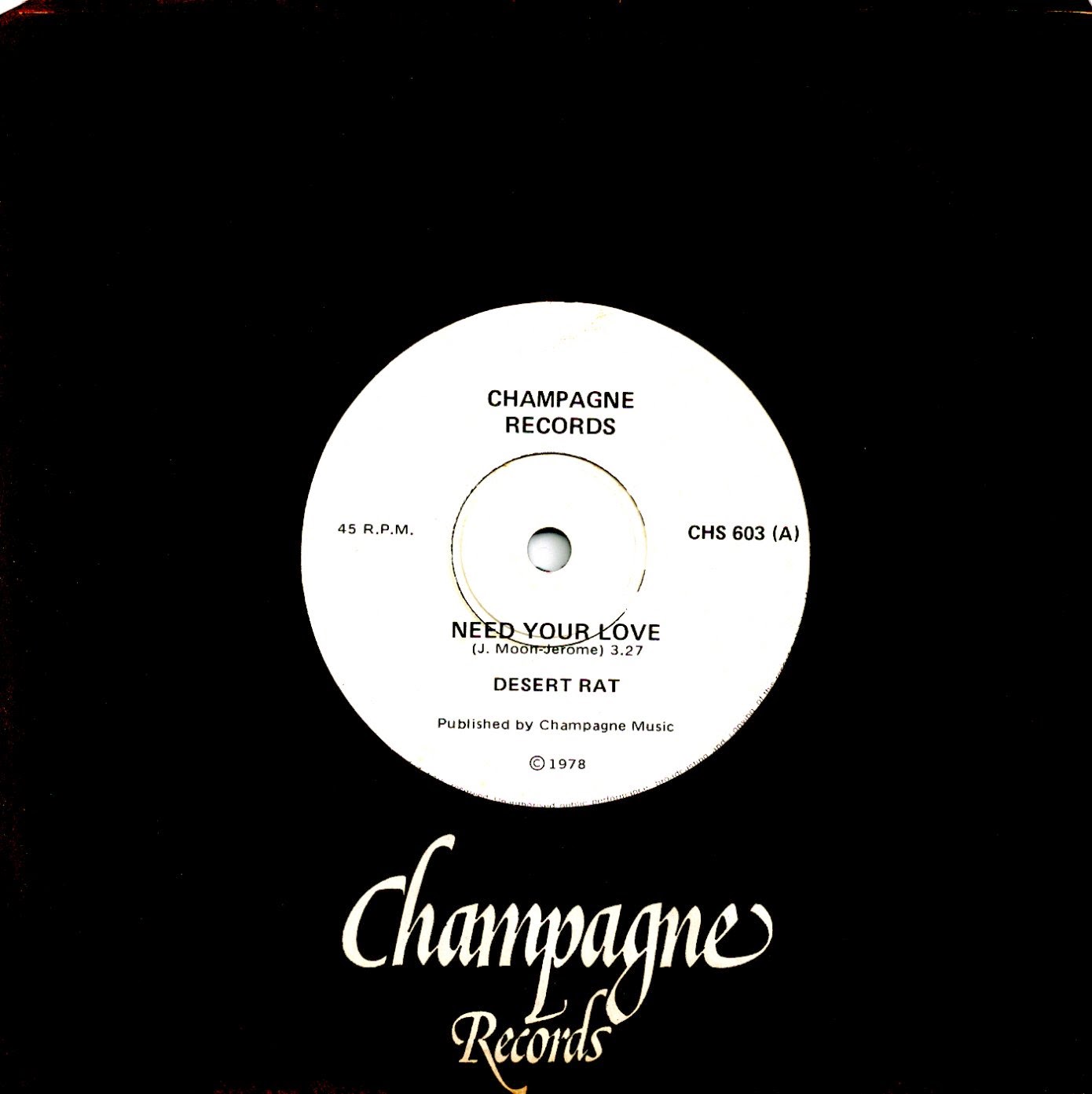 Desert Rat’s members had already been around the block a couple of times by the time of the LP’s release - guitarist John Moon and bass player Ian Ryan had both been in Buster Brown (with a pre-Rose Tattoo Angry Anderson and a pre-AC/DC Phil Rudd), among others. Though not featured in the line-up that recorded Home From The Front, Stephen Lazaros' tenure is also worthy of note. Lazaros had previously played with Wallaby Beat gap-fillers Lois Lane/The Benders, but more significantly, would later be re-christened as Smeer and feature prominently in Melbourne's hardcore punk scene as guitarist for Depression and drummer for Gash.

The level dumbness is fairly uniform across the LP, but there are moments that are less plodding than others, highlighted by side one's closing track, Take Me On.
Home From The Front also spawned a single (Need Your Love / Reach For The Sky [Champagne CHS 603, 1978], with both tracks featuring on the LP)  [extract from wallabybeat blog] 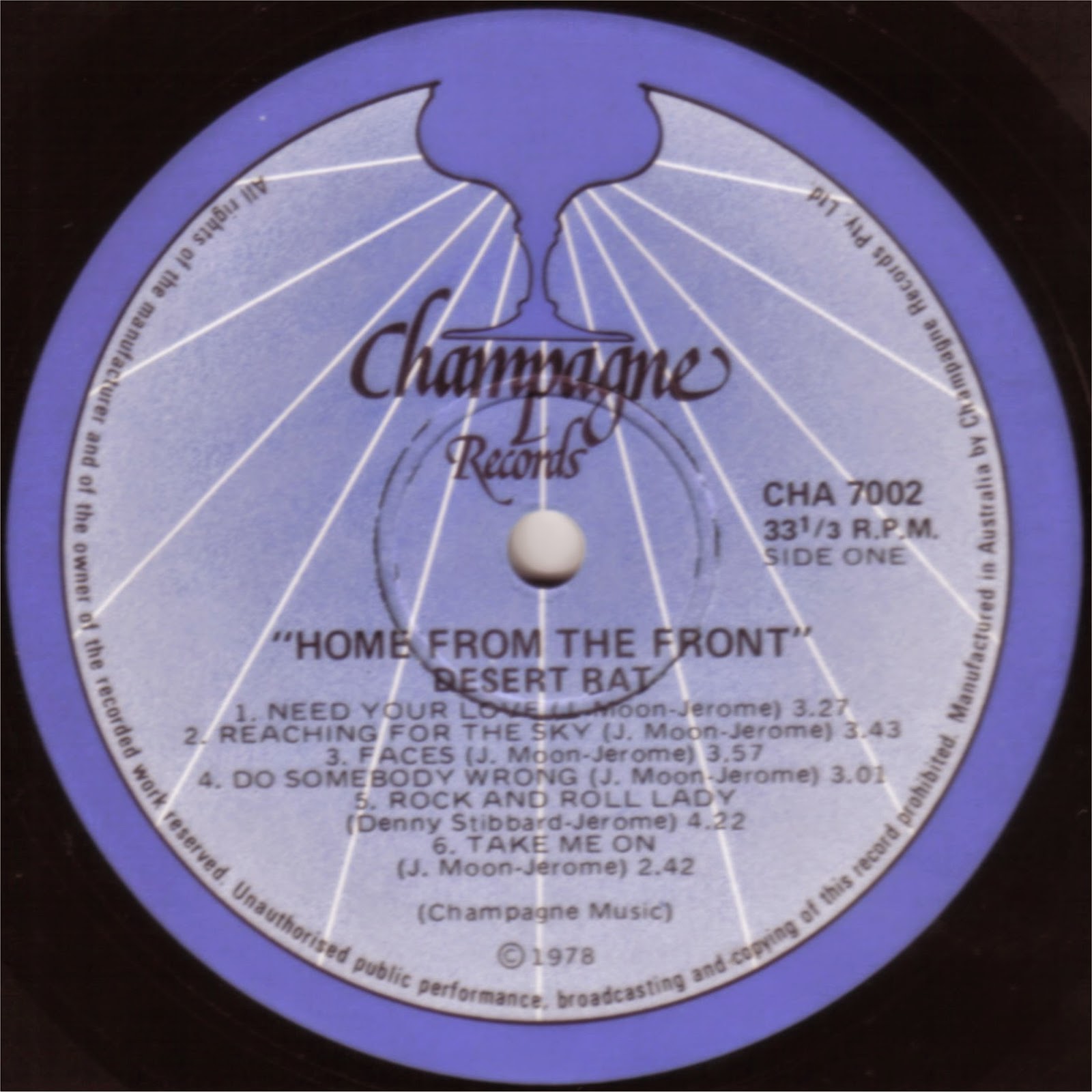 Verdict
Great album from Melbourne pub band, Desert Rat, that worked heavily around the traps. Released in late 1978, it was their one and only album and was engineered and produced by Gil Matthews from Billy Thorpe and The Aztecs. This album contains 11 hard rockin' songs similar to Finch or Redhouse, the production could've been better but hey, it's great Australian rock n' roll.

Highlight Tracks: Need Your Love, Reaching For The Sky, Do Somebody Wrong, Take Me Shake Me and "Rock And Roll Lady" which is my favourite.

This post consists of both FLACs and MP3 (320kps) which have been ripped from my pristine vinyl. Alas, the front cover suffers from bubbled shrink wrap and didn't scan well. Therefore, I have sourced a clean cover scan from the web to add to my artwork.  Label scans depict the independent  record label Champagne, that published some other great Aussie bands like the Savannah Silver Band and Cybotron.