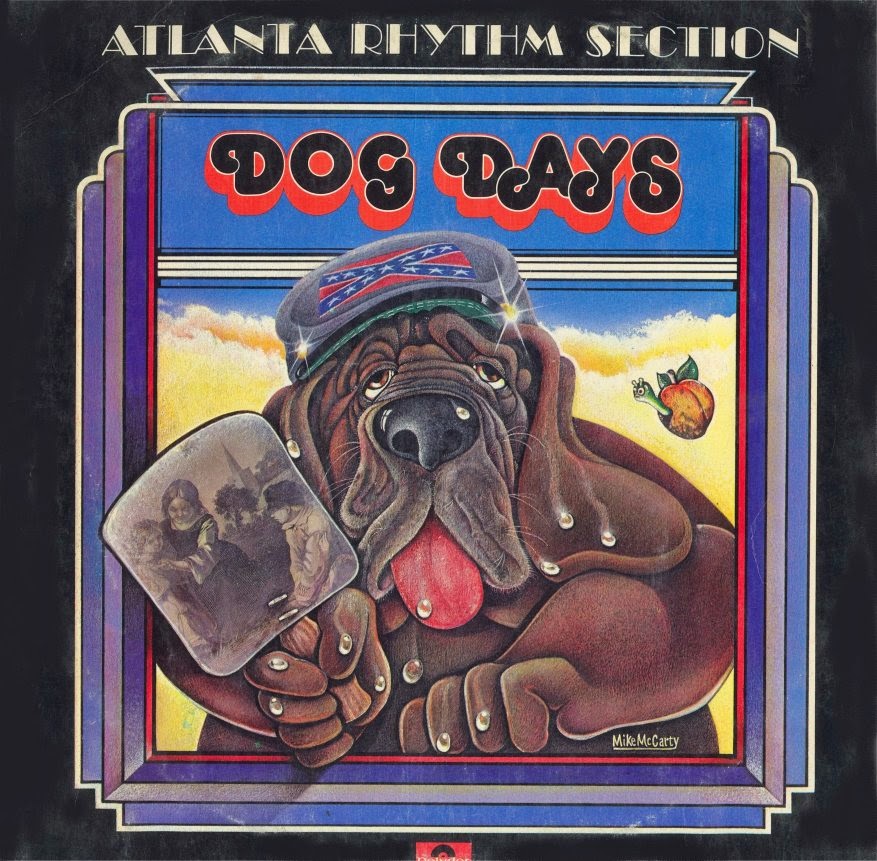 Atlanta Rhythm Section (ARS) was formed in 1970, intended as the house band for new state-of-the-art recording facility in Doraville, Georgia, and played on various recordings during the first year of the studio, for artists including Al Kooper, B J Thomas and Joe South. 38 Special and Lynyrd Skynyrd also gravitated towards the studio.
Between sessions ARS recorded their own material, largely instrumental pieces in the early stages, and their demos secured a two-record deal with MCA/Decca Records. The group's self-titled debut album was released in 1972 but Rodney justo left soon after to pursue a solo career and was replaced by vocalist and multi-instrumentalist Ronnie Hammond from Macon, who had come to Studio One as an assistant engineer to Rodney Mills.
Two further albums, 1973's Back Up Against The Wall and 1974's Third Annual Pipe Dream, the latter for their new label Polydor Records, showed increasing maturity particularly in songs such as 'Conversation', 'Another Man's Woman', 'Angel' and 'Doraville', a local Top 40 single. The IPs offered a blend of up-tempo songs and ballads, an engaging mix that would become fundamental to the group's success.
"It was their songs that set ARS apart from all of their Southern contemporaries and most, if not all of the other artists of their time."

The band had truly cut its teeth over these first three LPs but it was 1975's Dog Days that introduced some musical bite -no pun intended. Their fourth album was much tighter and is viewed by many as their first real masterpiece containing, as it did, six up-beat tracks and two ballads, all written by the band. The group achieved the "real ARS sound" with this record, something they targeted on 'Doraville', the very last song taped for their previous third LP. 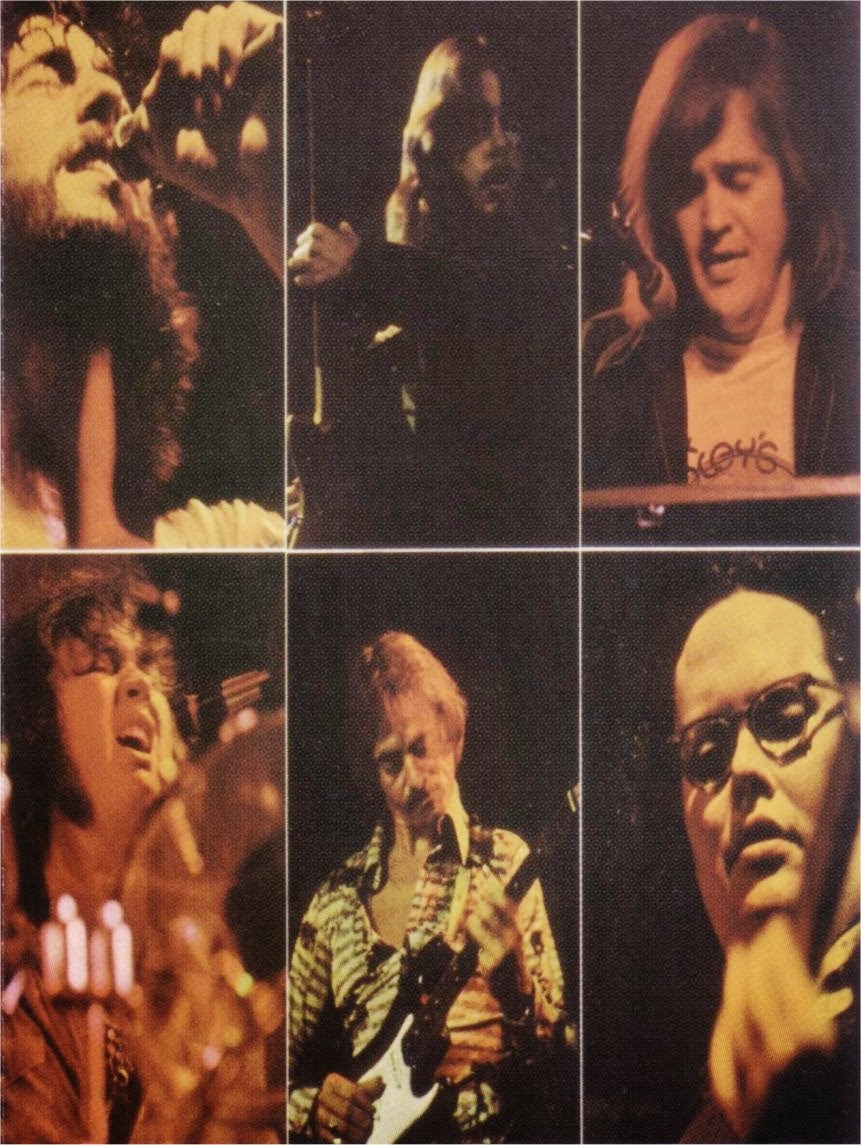 Many of the Dog Days tracks really do rock and are heart felt compositions about real life situations. 'Crazy' meditates on (then) current times and takes a swipe at 'glitter rock' or, as ARS Historian Kevin Dockrell describes it, "a blistering commentary on the 'rock-as-theater' craze." 'Boogie Smoogie' becomes a lively stomper and the exceptional 'Silent Treatment' provides electric tension over its six minutes duration with fine dynamics creating a sophisticated groove and mood. 'Cuban Crisis' is a lighter, spritely shuffle and the two featured ballads - 'Dog Days' and 'All Night Rain' - are absolute class, the expressive lyrics painting gorgeous pictures of the steamy south with Hammond's mellow conversational vocals and Daughtry's beautiful keyboard work.
Lynyrd Skynyrd may have been leading the southern brigade in Joe Public's eyes, but ARS were musicians first and foremost and frankly had stronger songs in greater abundance. This asset marked ARS apart, dabbling as they did in rock, blues and country. In fact, 'Boogie Smoogie' from Dog Days hinted at their musical canvas.

"We like reggae, we dig country, classical music's a gas.
We play the blues in three quarter time, but they don't
want to hear that jazz - they just want boogie"

Despite the wealth and quality of self-composed material on Dog Days, the IP did not furnish a hit single. Although ARS continued touring with a growing regional following, a major national breakthrough eluded the band and they were soon back in Studio One to record their fifth album 'Red Tape' [notes by Campbell Devine, 2005]

Album Review (taken from official Atlanta Rhythm Section's website)
'Dog Days' was ARS's first masterpiece and an album that still stands with their best. It showcases a band that has found its groove and is taking its music to a new level. Featuring another fine collection of songs about themselves and the South, the band displays a growing array of musical styles and approaches that are very different from where the rest of Southern Rock was headed. Overall, it's a faster paced album that what had come before, featuring six uptempo songs and two beautiful ballads-all originals.

It opens on some high notes with the rocking "Crazy" leading into the buildup blues and breakout jam of "Boogie Smoogie". A couple of lighter tunes lead into a ballad that is ballad that is a beautiful evocation of the South Dog Days. For the second album in a row they show off their chops with an instrumental "Bless My Soul". The album closed with another classic ballad of Southern images "All Night Rain". While other bands were striving to claim the mantle of kings of Southern rock, ARS had started making music no other Southern band has ever been able to duplicate.

1. Crazy
The album starts off in overdrive with a guitar solo leading into meditations on the times. Vocals, keyboards and guitars build into a musical crescendo rocking harder than anything ARS had recorded before, with Ronnie Hammond's vocal expressing the band's disdain for those who "powder your nose and paste on your glitter.
2. Boogie Smoogie
Their first longer recorded work, this begins as a slow guitar-and-harmonica blues that recounts ARS' frustration with audiences who "just want to boogie." It then accelerates into a roadhouse stomp that boogies as well as anything to come out of the South, but with an emphasis on melody and tone seldom matched elsewhere.
3. Cuban Crisis
The mood lightens up with this lilting, uptempo remembrance of a Saturday night on the town in Ybor City, FL and the characters encountered there.
4. It Just Ain't Your Moon
The rocking rolls on with track that drives home the notion that some things are not meant to be, and incorporates some of ARS' classic tempo changes to beautiful effect.
5. Dog Days
A classic. Dean Daughtry's keyboard leads Hammond's vocals through a melody that rises and falls, with lyrics that capture images of life in the South during the heat of summer. At the end of the second chorus, the song suddenly and dramatically changes tempo, and guitarist Barry Bailey takes over, leading the band into a driving musical interlude before returning to a closing keyboard coda.
6. Bless My Soul
An instrumental blues shuffle, featuring solid ensemble playing and some great guitar soloing.
7. Silent Treatment
A subdued but intense rocker about a mysterious woman and a pickup in a "loud Hotlanta honkytonk." Tempo changes are again used to great effect both to create mood and build a sophisticated musical framework.
8. All Night Rain
The album closes on a lighter note with this ballad featuring guitars, piano and Hammond's conversational vocal. Again, Southern summer scenes are evoked both in words and sounds. "Can't you hear the thunder, see the lightning cross the sky?" 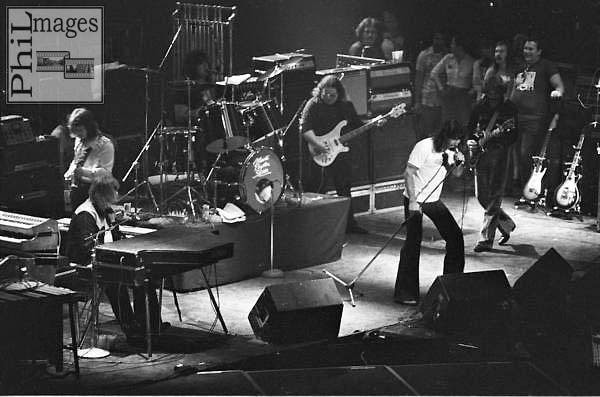 This post consists of MP3 (320kps) ripped from my 'well played' but crystal clear vinyl, which I bought many moons ago. Full album artwork for LP and CD are included. I acquired the copy after they released their popular "Imaginary Lover" single, I have always enjoyed listening to this album and just wanted to share this with you. One abnormality that I discovered while doing this post is that my record label indicates that the album was released in 1977 rather than the actual 1975 release date.  Other pressings indicate the correct year, so my Australian pressing must be incorrect (see labels below). I'd be keen to hear from anyone else who can confirm this - otherwise my pressing could be 'something unique'. Another mistake is an incorrect annotation on the back cover where the track length of "Silent Treatment" is shown as 6:15 when in fact the song is actually 5:15 long. 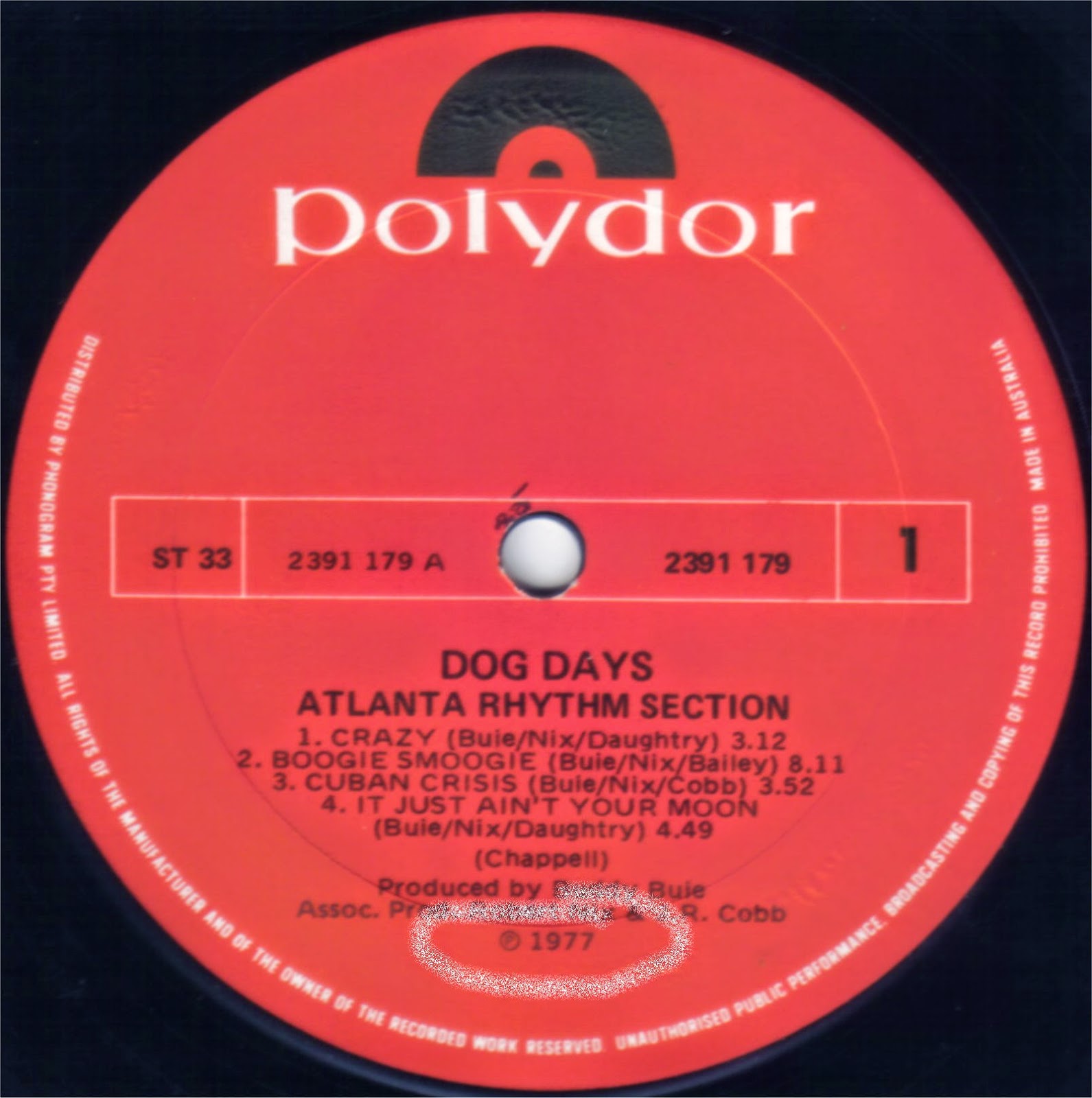 Finally, while researching this post I was sad to learn that Paul Goddard, their bass player and a founding member of the band, died April 29, 2014, after a brief, sudden illness. Paul was 68.  RIP
. 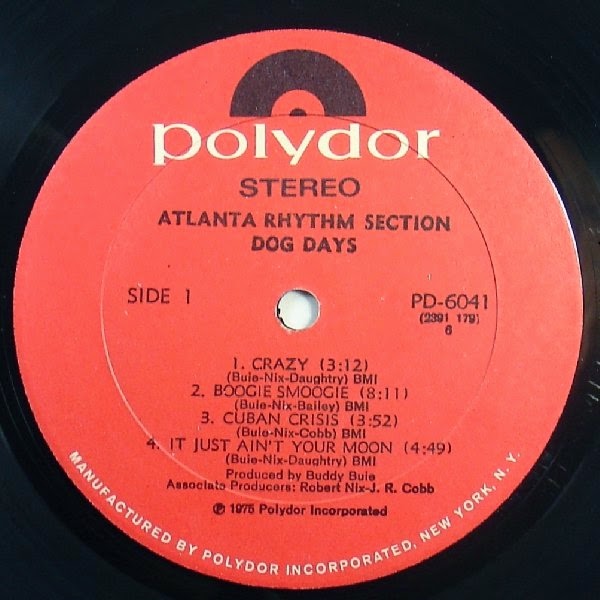