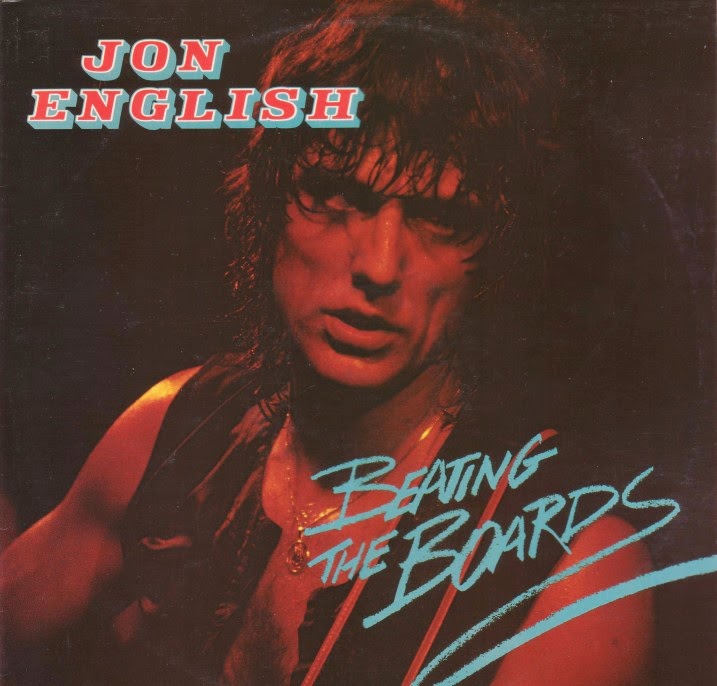 Jon English is one of few Australian performers who have successfully combined a career in so many genres of music, television, and stage.
From the early 70’s in the demanding role of Judas in Australia’s first and enormously successful production of ‘Jesus Christ Superstar’, to his Logie winning performance as the convict Jonathan Garrett in the TV mini series, ‘Against the Wind’, together with countless return seasons as the dashing Pirate King in ‘Pirates of Penzance’ and the lovable Bobby Rivers in the TV sitcom, ‘All Together Now’, Jon has contributed immeasurably to the performing arts for nearly four decades.
With no less than 16 music albums to his credit, including the self penned rock opera ‘Paris’, any attempt to list his many achievements in this short space would only result in copious sins of omission.  His hits include Turn the Page, Some People, Hollywood 7, Six Ribbons, Words are not Enough, Hot Town, Carmilla – just to name a few – and his many accolades include multiple Logie, Aria, TV Week, Countdown, RAM Magazine, Melbourne Critics Green Room, AFI and MO awards.
A prolific songwriter, experienced screen composer, and a popular actor with wide community recognition and critical public acclaim, Jon is one of Australia’s most successful, loved, and enduring recording and performing artists.
. 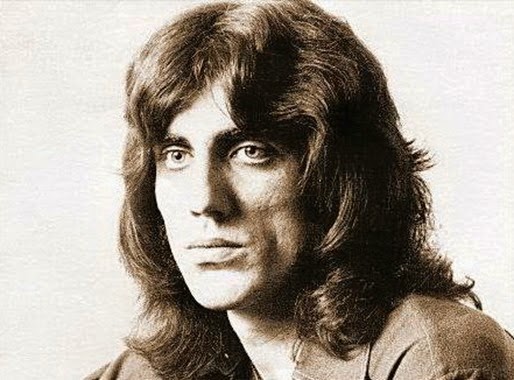 Jon English BIO  (pre1983)
Jon's birthplace was Hampstead, England. He migrated to Australia with his family at the age of thirteen and two years later joined forces with three fellow students at Cabramatta High School to form the original Sebastian Hardie.
He remained with the band until January 1972 when he auditioned, along with 2,000 other hopefuls, for a part in Jesus Christ Superstar. Not only did Jon win a part, but he was given the very demanding and prestigious role of Judas. His performance in the show was highly acclaimed wherever it was staged. He remained in the production for two years.
Superstar was not his only activity during this period though. Initially he worked casually with a band called Duck and appeared on the LP called Laid. Then, later in 1972, he began recording his own album entitled Wine Dark Sea, which was released in March 1973 on the Warm and Genuine label through Phonogram. A single, 'Handbags And Gladrags', was cut from the LP and a follow-up, 'Close Every Door', came out in July '73. 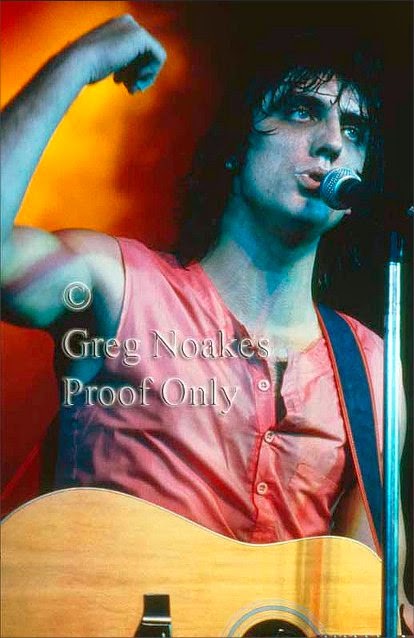 In March 1974, Superstar closed and Jon went straight into the studio to record the soundtrack of the rock opera of Ned Kelly (in which he took the part of Ned). Jon also started doing a lot of live performances as well as cameo appearances with his old band (Sebastian Hardie) and an outfit called Baxter Funt. Other activities included starring in the play Bacchoi, the co-writing of a ballet called Phases, and writing a column for the Sydney Daily Mirror. Somehow Jon found time at the end of the year to record his second album, It's All A Game, which was released in January 1975. One of the outstanding tracks on the album was 'Turn The Page', and as a single it became his first hit.
A new version of Jesus Christ Superstar had emerged meanwhile, and Jon rejoined the show and toured with it around Australia and New Zealand. He remained with the production until early in 1976 when he began recording his next album, Hollywood Seven. The title track was released as a single first of all, and the LP hit the market in August. Another song, 'I'm A Survivor', was also lifted from the album. Later in the year Jon and Trevor released a joint single, 'Laid Back In Anger'.
Jon's acting career was also expanding with appearances in TV dramas such as Homicide, Matlock Police and No.96. In March 1977, another single, 'Lay It All Down', was issued from the forthcoming Minutes To Midnight album. Then came a tour with Bryan Ferry and another single, 'Behind Blue Eyes' (May 77). At this point, with touring becoming such an integral part of his career, Jon decided to form his own five piece band which included two keyboard players. Jon's last single for 1977 was 'Every Time I Sing A Love Song', released in August.
Plans for 1978 included a proposed European and US tour (where 'Hollywood Seven' received airplay) in February and the release of his new album which was completed in December '77.
. 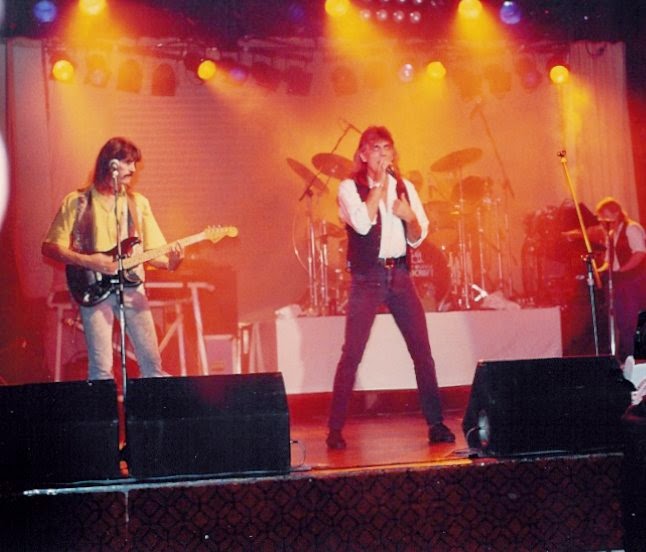 Not only was 1978 Jon's biggest year for recording ("Words Are Not Enough' scored higher on the national charts than any of his previous singles), but his acting career received a tremendous boost when he landed a lead role in the million dollar Australian-made television show, Against the Wind.Jon's part as a 19th century convict in the thirteen episodes kept him busy from February to August. The first episode was screened in September, and the show was sold in England, parts of Europe and also — a major breakthrough — for a six figure sum in the US.
In December, an Against the Wind soundtrack album was released by Polydor. All tracks were arranged, composed, performed and produced by Jon and Mario Millo. (Their relationship dates back to the early seventies when they worked together in Sebastian Hardie). A single, 'Six Ribbons', was lifted from the album and released in December. 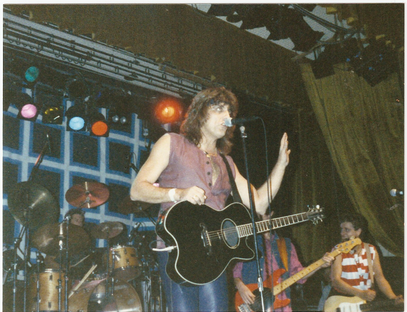 Jon also worked on his solo career during '78. In June, 'Words Are Not Enough', released as a single, soared to the number five position on the charts. It was followed by an album in August. Originally titled Fluent English, but changed after the single's success to Words Are Not Enough, it was recorded at Albert Studios in Sydney and mastered in the UK. It displayed a more diversified sound than his previous work, and a second track, 'Nights In Paradise', was lifted from it in September providing Jon with yet another hit.
Apart from television acting, recording and touring (with his band Baxter Funt) he completed a third stint as Judas in Jesus Christ Superstar on the Sydney club circuit midway through the year.
A 'Best Of 'compilation planned for release in the first half of the year; and with a green card that will allow him to work in the U.S, he plans a visit there early in the year to pursue his acting/recording career
[extract from Noel McGrath's Australian Encyclopedia of Rock, 1978: p105-106, 1979: p19-20]
. 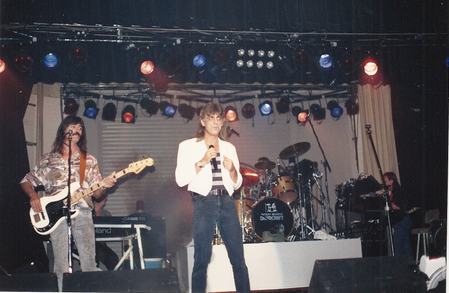 In April 1980, English released Calm Before the Storm which peaked at No.17 on the albums charts, with a single "Carmilla" peaking at No.27; this was followed by the less successful Inroads from January 1981 and singles "Hold Back the Night" and "Ask no Questions". Meanwhile, Against the Wind was shown on international TV stations in United Kingdom and other parts of Europe as Gegen den Wind in Mot alla vindar in Scandinavia. Success in Scandinavia included the soundtrack peaking at No.1 on the Norwegian Albums charts and two singles, "Mot alla vindar" and "Six Ribbons" both peaking at No.1 on the Norwegian Singles charts, all in 1981. English History, his compilation album also peaked at No.1, follow up albums Calm Before the Storm and Inroads both reached the Top Ten in Norway. In Sweden the soundtrack and the "Six Ribbons" single both peaked at No.4 on the relevant charts in 1980, later English History and "Hollywood Seven" reached the top twenty in their charts. 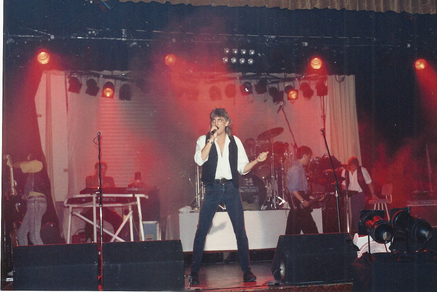 During 1981, English toured UK and Scandinavia with Mario Millo (guitars, ex-Sebastian Hardie), (guitar), Jackie Orszaczky (bass; ex-Syrius, Bakery, Marcia Hines Band), Coz Russo (keyboards), Richard Gawned (tenor sax, flute; ex-Marcia Hines Band) and Nick Lister (drums; ex-Kush).
English teamed with former Superstar co-lead, Marcia Hines, to produce July 1982's mini-album Jokers & Queens (see previous post) and its self-titled single, the album peaked at No.36 on the Australian albums charts and the single reached No.62 on the singles charts
His double live album, 'Beating the Boards' was released in early 1983 with backing by the Foster Brothers containing John Coker (bass), John Dallimore (guitar, flute, vocals; ex-Redhouse), Peter Deacon (keyboards, vocals), Greg Henson (drums) and Keith Kerwin (guitar, vocals; ex-Southern Star Band).  [extract from Wikipedia]
.
This post consists of FLACs and MP3's (320kps) ripped from a CD release (now out of print) and includes full album artwork for both CD and Vinyl releases. I chose to rip the CD rather than my vinyl copy, because the LP's cause the stylus to jump around a bit.  Imperfections in the pressing I suspect.
This double live set acts as a good anthology of Jon's recording history, but some of the tracks don't quite capture the sound quality of their equivalent studio tracks (eg. Hollywood Seven and Turn The Page) 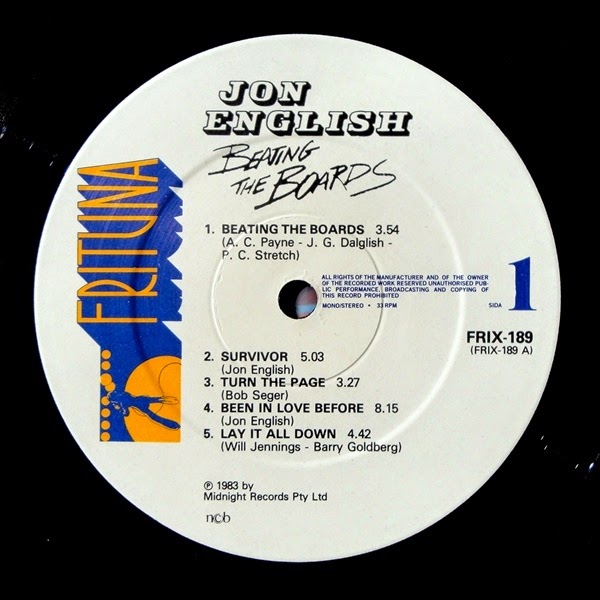 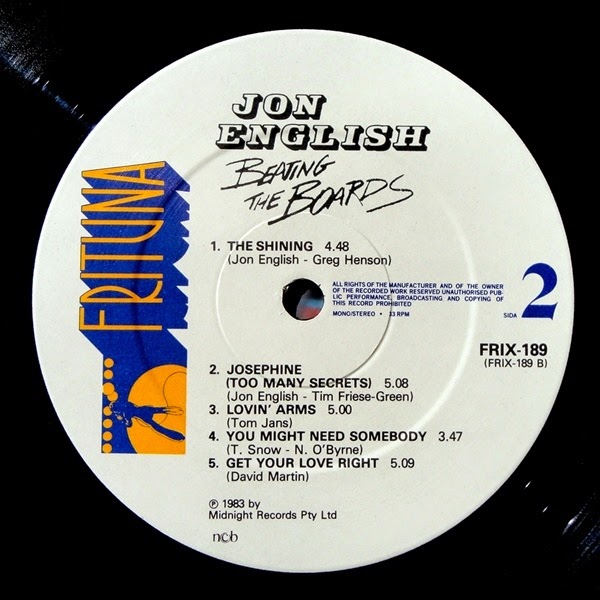 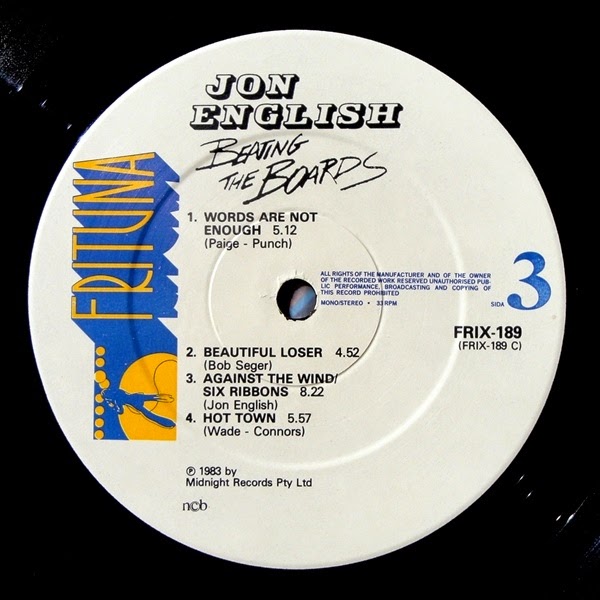 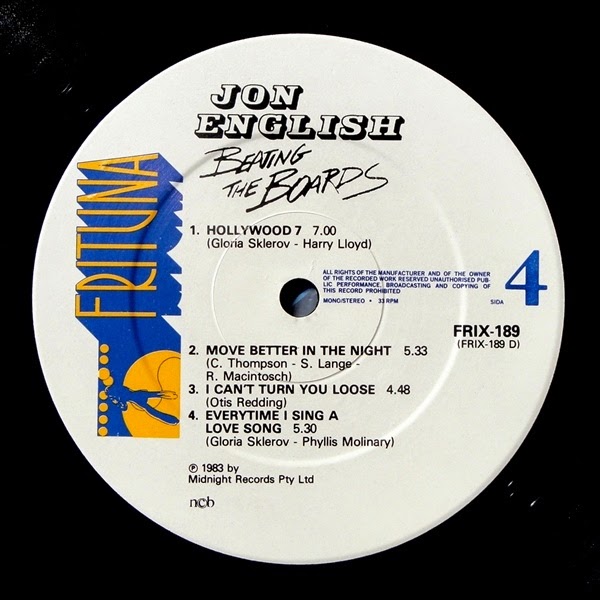 Posted by AussieRock at 9:52 PM