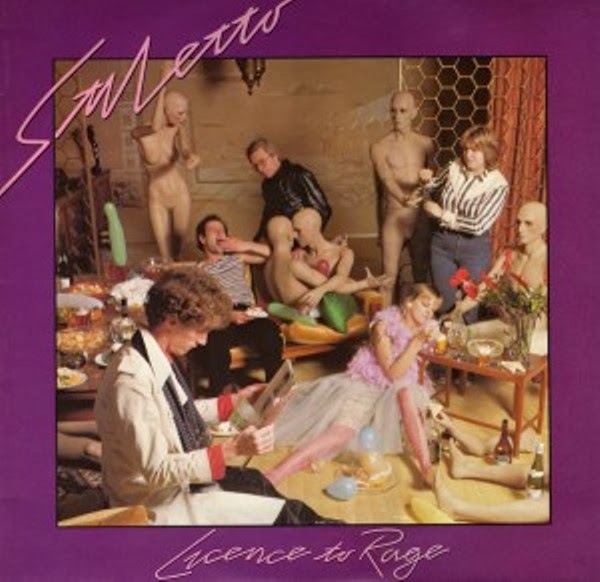 Stiletto formed in the Autumn of 1976 and quickly gained a reputation of being a strong feminist band. At that point, their line-up included singer / songwriter Janie Conway on guitar and vocals and Marney Sheehan on bass. Shortly after Chris Worrall joined the band", Janie left. She did some demo tapes, produced by Mike Rudd for EMI, played as a duo with another singer/songwriter, Marney Sheehan (ex-bass player in the original Stiletto line-up) and, finally, in late '78, formed her own rock band, Janie Conway's Scarlet.
Stiletto first appeared on vinyl in July 1977 when they provided the B-side, 'Nights In Parlour', to Red Symon's single "Only A Flipside'. Later in the year, they gained prominence with the release of the Oz Records compilation album, Debutantes, to which they contributed three songs. 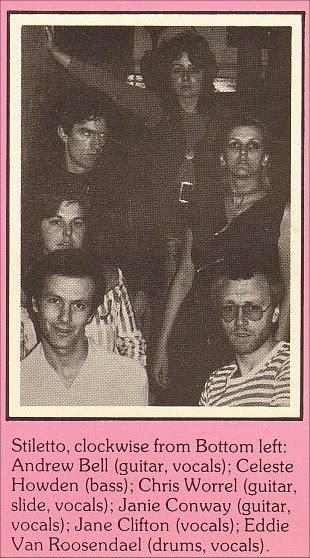 Their first wholly Stiletto single, 'Bluebirds', written by Andrew, was followed in August '78 by their debut album, 'Licence to Rage' — unfortunately to become their only LP. Two tracks from the album, 'Goodbye Johnny' and 'Woman In A Man's World' were released as a single (Oz label) in the same month.
In November it was announced that one of their songs, 'Women In Trouble', was to be used on a film soundtrack (other tracks by the band had been used previously on movies). This news was accompanied by some not so good tidings — they were dropped by their record company, EMI. Regrettably, this seemed to precipitate their dissolution.
Chris Worrall left to join Paul Kelly and the Dots. He was replaced by Chris Dyson (ex-High Rise Bombers) and briefly the band seemed to rejuvenate, and even appeared as special guests on Elvis Costello's Melbourne show; but early in 1979 the final decision to split was made.
Jane, Andrew and Celeste appeared in a rock musical,Mickey's Moomba, at the Pram Factory in February-March '79. (Andrew and Celeste in the backing band and Jane in a singing-acting role. Andrew also wrote some of the show's music.) Chris and Eddie were to join a reformation of the Melbourne new wave band, News, but in early '79 were playing with the Romantics [extract from Noel McGrath's Australian Encyclopedia of Rock (1978-79) Yearbook, p94-95]
. 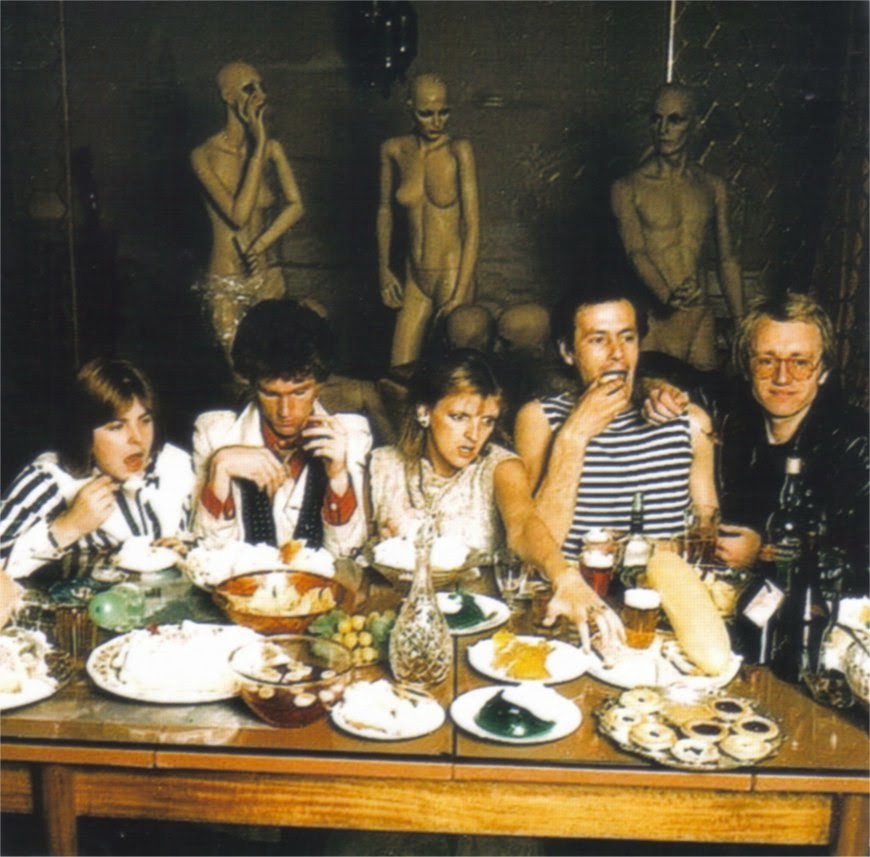 Pub Bands - An Ocassional Guide
(Article by Jenny Brown, 'Bottom Line' Newspaper - March / April 1978, p12)
.
Half man, half woman! C'est Stiletto, one of Melbourne's few truly underground bands, burrowing upwards toward the light of widerr recgnition.
Stiletto, whilst pretending to a certain cool, are closet flamboyants. Lots of colorand imagery, scrambled genders, and a sort of shivering toughness which has definite appeal.
Constant revolving in the club 'n' pub circuit has polished this sharp little gem of a band until crikey they can really rock. There's been the odd line-up casuality, but always the replacements have been well selected, eventually beefing up the band. 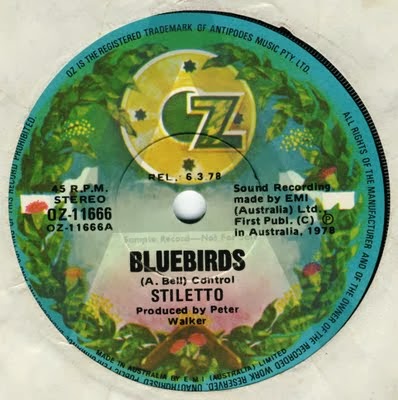 The line-up (at this time) is now Jane Clifton (vocals), Celeste Howden (bass), Chris Worrell(guitar), Andrew Bell (guitar) and Ed Van Roosendale (drums).
Stiletto's repetoire contains some very incentive originals, with a dyed-in-the-wool Melbournian 70's feel. Their interest in women's blues has labelled them a feminist band, but those who think the female members dominate the group may be surprised to know the guitarist Andrew Bell penned the tragicomic "Women In Trouble" (about the long distance adoration and eventual spurning "I wouldn't fuck you with a dog's dick" etc. of an impervious female passer-by building site workers). Also notable are "Premenstrual Blues", "Cream" and many more.
By no means are Stiletto going to set the world alight, but they have earned their tracks on the 'Debutantes' album released by Oz Records this November. They also have the flip-side of Red Symons "It's Only a Flip Side", the single from the album, with 'Nights in the Parlour'.
.

When Jane Clifton talks about Stiletto, you can’t help but get the feeling that she looks back on her days in a rock’n’roll band not so much with regret as with a wisdom and a knowledge that she didn’t have when the band started.

Comfortably settled into a circuit of activities that includes acting, swingtime/jazz singing, and a late night spot at the Last laugh Theatre Restaurant, she can probably afford to feel that way. But the Stiletto sag, starting off with so much enjoyment and ending in so much disappointment, still looms large in her mind.
“One of the great failings of Stiletto,” says Jane matter-of-factly, “was there was no single central figure to say this is the way ahead, this is the music we’ll play, these are the ideas we’ll have.” 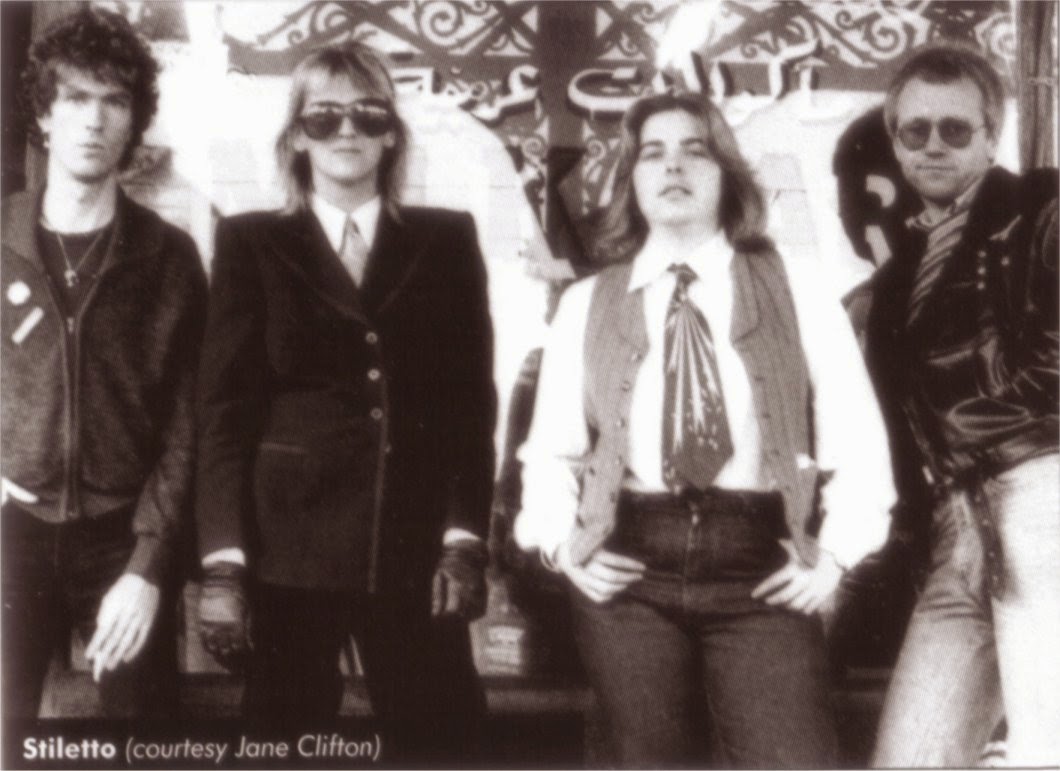 “I firmly believe now that the most successful – in the commercial sense – rock and roll ventures have a typical structure, where there is a central person with an idea around whom other people cluster .“
She pauses a moment, then settles back into her armchair. It’s obviously a long story, and no longer worth telling in too much detail.
“ Like, in the beginning of Stiletto, we just fell into the band. It may have been that the five of us who ended up being together actually chosen people, we might not have chosen each other, for a lot of reasons.”

‘But,” adds Jane with a wry smile, “Stiletto was the band where I finally got to do the whole rock and roll trip, working four or five nights a week, touring…and getting exploited.”
. 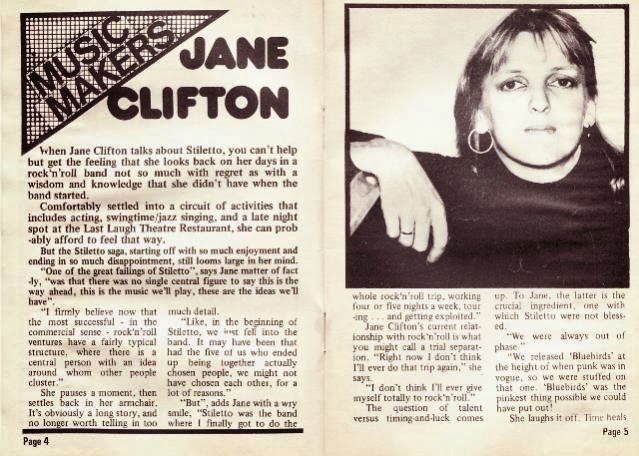 Jane Clifton’s current relationship with rock’n’roll is what you might call a trial separation. “Right now I don’t think I’ll ever do that trip again,” she says.

“I don’t think I’ll ever give myself totally to rock’n’roll.”
The question of talent versus timing-and-luck comes up. To Jane,the latter is the crucial ingredient, one with which Stiletto was not blessed.
“We were always out of phase.”
“We released ‘Bluebirds’ at the height of when punk was in vogue, so we were stuffed on that one. ‘Bluebirds’ was the pinkest thing we could possibly have put out!”
She laughs it off. Time heals all wounds.
“Then we released ‘Goodbye Johnny’, but by then the wave was over.”

“Our lyrics were out of phase too.”
But Jane, I always thought that was the one thing about Stiletto that was IN phase!
“They were to start with,” answers Jane, ‘and we were singing about interesting stuff that would never be popular within mainstream commercial rock.”

Stiletto never did quite achieve what they wanted i.e.general acceptance. Compounded by an album, as Jane admits, never quite lived up to the promise the band had shown, the band, the concept, and the hopes folded.So how does she come to be performing with a jazz band doing Cole Porter material and the like?
The answer is simple.

She’d always enjoyed slipping into a torch song; even with Stiletto (‘Second Home’ and ‘Nights in Parlour’ were amongst their best songs).

When management of The Flying Trapeze Theatre Restaurant convinced her to take part in their fifth birthday celebrations, her spot was so successful that offers of work began coming in virtually of their own accord.

“Everybody kept saying ‘keep doing it’, and I kept getting offered gigs…it was exactly the same way Stiletto started, totally by accident and seeming like a nice idea.”

“I intend keeping it that way,” continues a worldly wise Jane. “With Stiletto we pushed the idea too far, kept it going too long. With this, as soon as the idea runs out or I get sick of it – I’m going to finish it.”

The obvious question is, do you feel more at home performing this style of music than you were in the rock band?

“Well, they’re both parts of what I wanted to do, Like, I don’t totally think of having left rock behind, but I’d never do it as part of a band.”

‘At the moment I’m getting another part of me out of my system, and learning a whole lot about jazz. Which, for me, is just great.”.  The smile on her face confirms that.
. 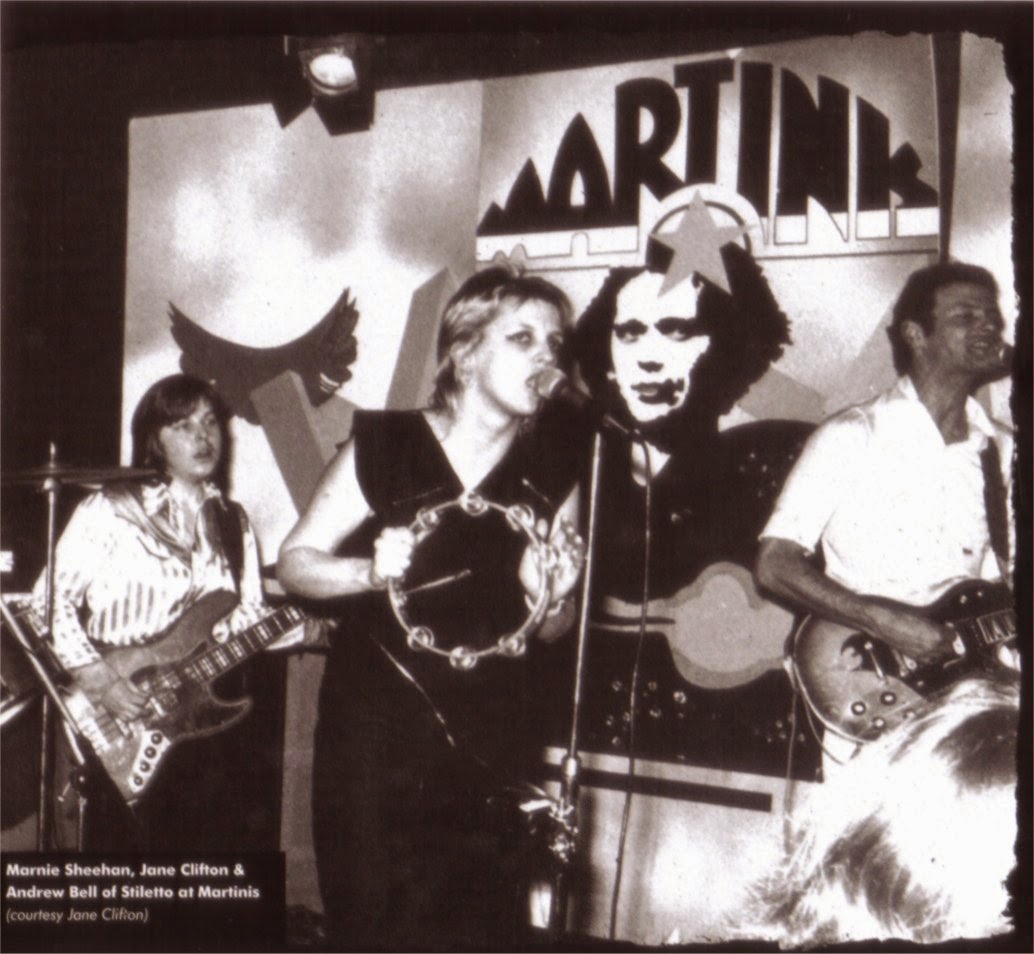 This post consists of MP3 (320kps) ripped from vinyl and includes limited album artwork, sourced somewhere on the Internet many, many years ago.   I have also chosen to include 3 bonus tracks, taken from the Aussie compilation album 'Debutantes' (produced by Red Symons) to sweeten the deal. Thanks must go to Ozzie Music Man for providing me with these 3 tracks. Oh, and keep your ears out for the track "Cream" which has a distinct 'Skyhooks' sound about it, with Jane sounding a lot like Shirley Strauchan.
Stiletto were certainly an under rated band who deserved greater success and better treatment from their record company. So grab a copy of this rare Aussie album while you can and know that with it comes a License To Rage !
. 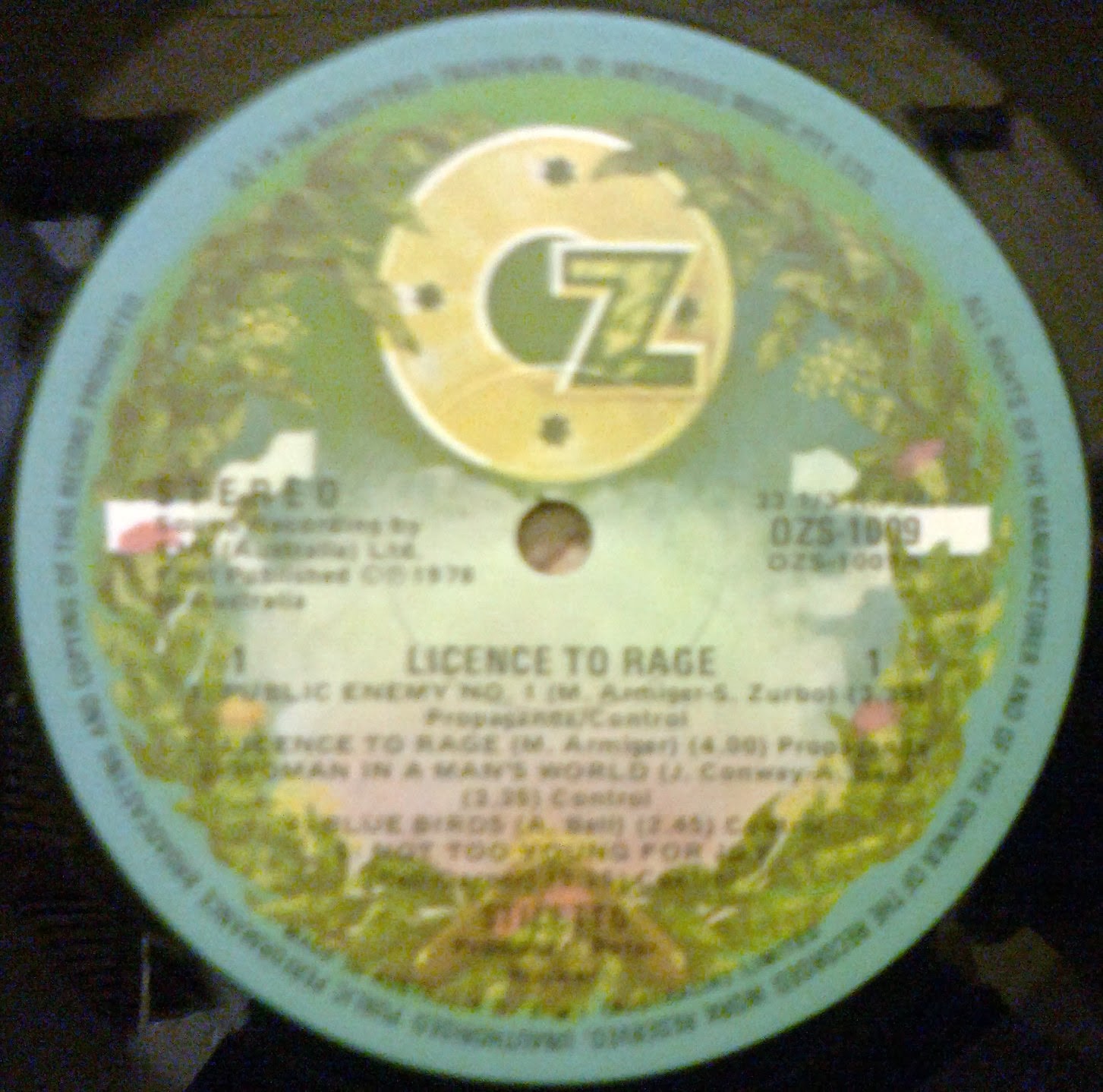 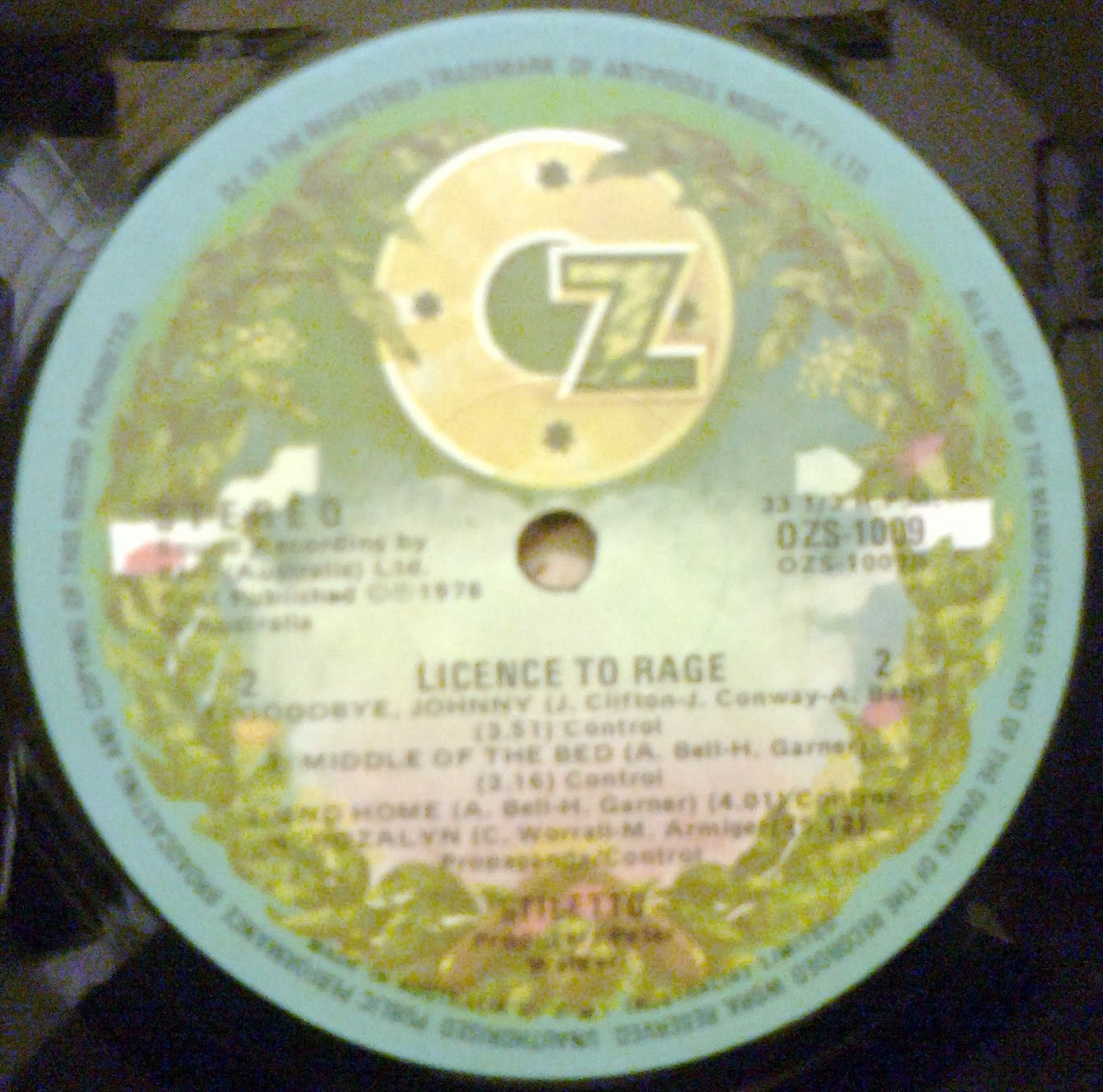