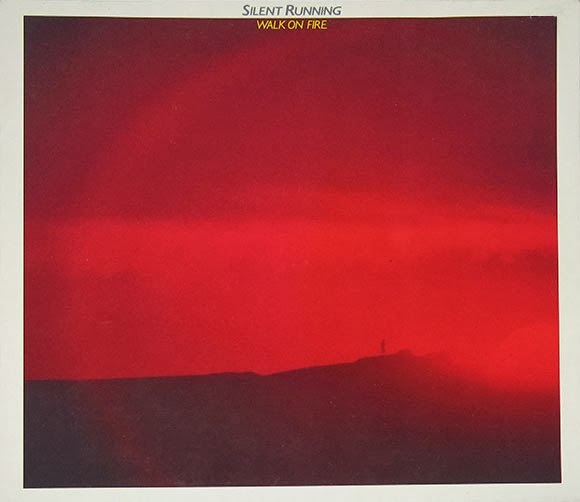 Belfast band who'd been active since 1978 as The Setz. The Setz changed image and musical direction at the end of 1981 and renamed themselves Silent Running.
Silent Running recorded a self-released demo single in 1982 with a Setz track on one side and a Silent Running track on the other. Just 300 copies of this demo single were pressed. It was not generally available to the public. Instead it was sent to various labels, DJs, journalists and other contacts within the music business as a calling card for the new band. As such it is now a difficult item to locate.
One DJ who liked what he heard was BBC One's Peter Powell, who invited the band to record a session for his radio program in the Autumn of 1982. This in turn led to interest from Warner Brothers who financed a seven song demo, but the deal being offered wasn't good enough and Silent Running signed instead to EMI. As far as I know the Warner session tracks have never been released. 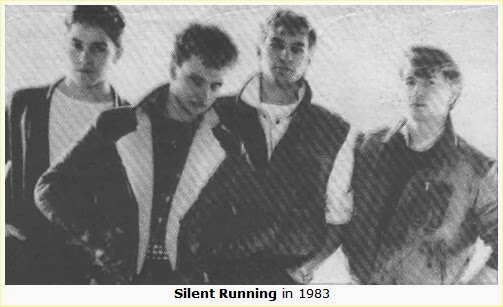 Colin Gates joined on keyboards in 1983, the same year the band's first single on EMI was released. This was followed by a series of records during 1984-87 which were criticised for being "forgettable passionless dance-rock". This is perhaps unfair, though their records are sometimes plagued by an over-earnest over-riding seriousness and an overbearing early 1980s production. At their best, they're reminiscent of Simple Minds of the same era.
The band made several TV appearances including The Tube in 1984.
Alex White left in 1985 and was not replaced, session players being used as needed. Ian Gault left in 1988 during the recording of the final album and was replaced by Gary Kirby (ex True Colours) [extract from irishrock.org]
.
Alternative BIO
In 1981, the Setz dropped the punky stuff in favour of a new ‘stadium rock’ sound a la Simple Minds and drafted in keyboard player Geordie Beavis. They changed their name to Silent Running and produced a promotional single, a double A side featuring 2 songs All The Kings Men and When The 12th Of Never Comes. 200 copies were pressed purely for promotional purposes.
A copy was sent to BBC Radio One DJ Peter Powell who played it on his 5.45 show .He subsequently offered the band a session for his show, which they duly recorded in Pebble Mill Studios. An appearance on the Oxford Road Show also followed. In January 1983, Silent Running signed  for EMI and released their first EP When The 12th Of Never Comes. Beavis quit the band during the recording of this single and from then on the band mainly used session musicians for live and studio work. They toured with Robert Palmer and on their own. In April 1984 they released their first album Shades Of Liberty and toured on their own and with Simple Minds in Britain, and extensively in Europe with Talk Talk. They released 3 singles Emotional Warfare, Young Hearts and Sticks And Stones, and appeared on national TV programmes including an Old Grey Whistle Test live concert and The Tube.
In 1986 Silent Running left EMI and signed for Atlantic Records New York, releasing their second album Walk On Fire in 1987. The single Sanctuary charted in the ‘rock’ top 40 in America. They toured with the Alarm and on their own around the East coast of America before releasing one further album Deep in 1989 on Atlantic. Gary Kirby (ex The Vedettes) replaced Ian Gault on drums shortly before Silent Running split up in 1990. [extract from Spit Records]
. 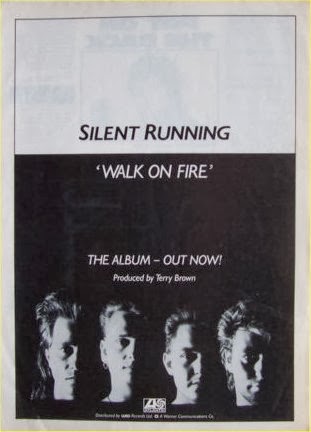 Album Reviews
Review 1 (thanks to Justin.G at Amazon)
1987's Walk on Fire was the second album from Belfast band Silent Running. I suppose comparisons to U2 are inevitable (hey, it's either that or Thin Lizzy), they are probably not fair. Walk on Fire is very much an 80's pop/rock album, and where an album like The Joshua Tree is timeless, this album definitely seems a bit dated. Besides, Silent Running's sound is closer to a harder rocking Simple Minds, particularly side 2.
Walk on Fire is still an impressive 80's album though, and one that should have done a lot better for the band. Even considering the keyboards and new wave hair, the band has an earnestness that you can't help but admire. For me, Peter Gamble's voice is the main attraction of this album. It's strong and full of emotion, and is perfectly suited to that mid 80's pop/rock sound. Standout tracks on this too brief (just under 36 minutes) are Sanctuary, Heartbreak City and Winds of War, though there really aren't any losers here.
It's a shame this album didn't bring the band a wider audience, because it is one of the better pop/rock albums from that time. I didn't discover the band until recently, but after hearing Walk on Fire I am now on the hunt for more Silent Running albums.

Review 2 (Thanks to Thalys)
Strong album, this second one of Silent Running. The band has been compared with the "Simple Minds" quite a lot, but Silent Running is heavier. The songs, especially on this album, are more guitardriven. Peter Gamble's voice has indeed a distinct resemblance with the voice of Jim Kerr.
Fav tracks: "Sanctuary", "Heartland", "Heartbreak City", "Winds of war" and "Under your skin".
Album was produced by Terry Brown.
.
This post consists of MP3 (320kps) ripped from my vinyl copy - recently acquired in almost virgin condition. Full album artwork is included along with select photos of the band, both as the Setz and Silent Running. I quite like this album, especially the opening track "Sanctuary" and recommend you give this album a spin, particularly if you are a fan of Simple Minds.
.
Tracklist: