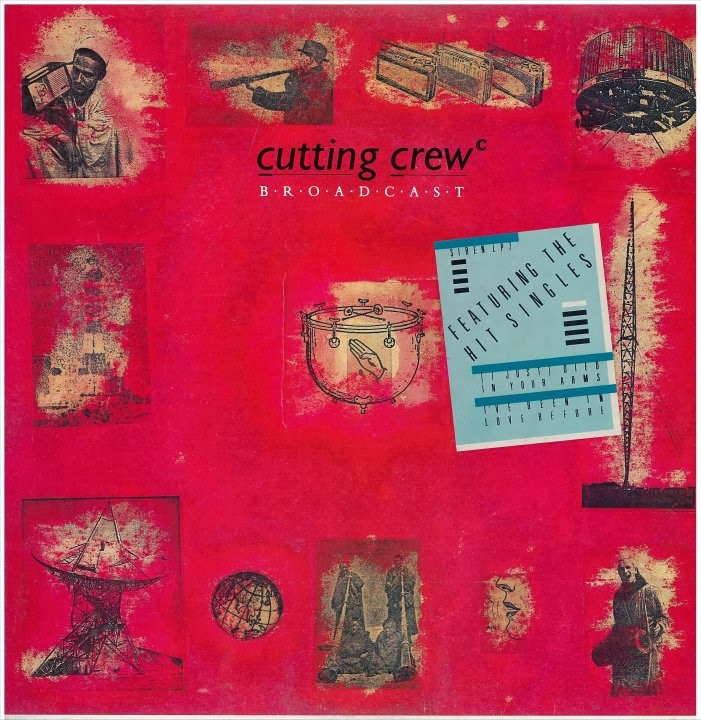 The pop/rock group Cutting Crew formed in England in 1985, just one year before "(I Just) Died in Your Arms" made them stars at home and across the Atlantic. Founding members Kevin Scott MacMichael (guitar) and Nick Van Eede (vocals) met in Halifax, Nova Scotia, while both musicians were on tour with their respective bands. A musical connection was made, and MacMichael soon relocated to England, where he and Van Eede immediately began to collaborate. After signing with Siren Records on the strength of their demos, Cutting Crew became a foursome in 1986 with the addition of bassist Colin Farley and drummer Martin Beadle; they entered the recording studio that same year. While the pace was certainly quick, the quartet was comprised of veterans; Eede had toured the world with his Sussex-based outfit the Drivers, MacMichael served time as guitarist for Fast Forward, Beadle was a one-time member of Hull, and Farley had completed hours of session work for many artists. 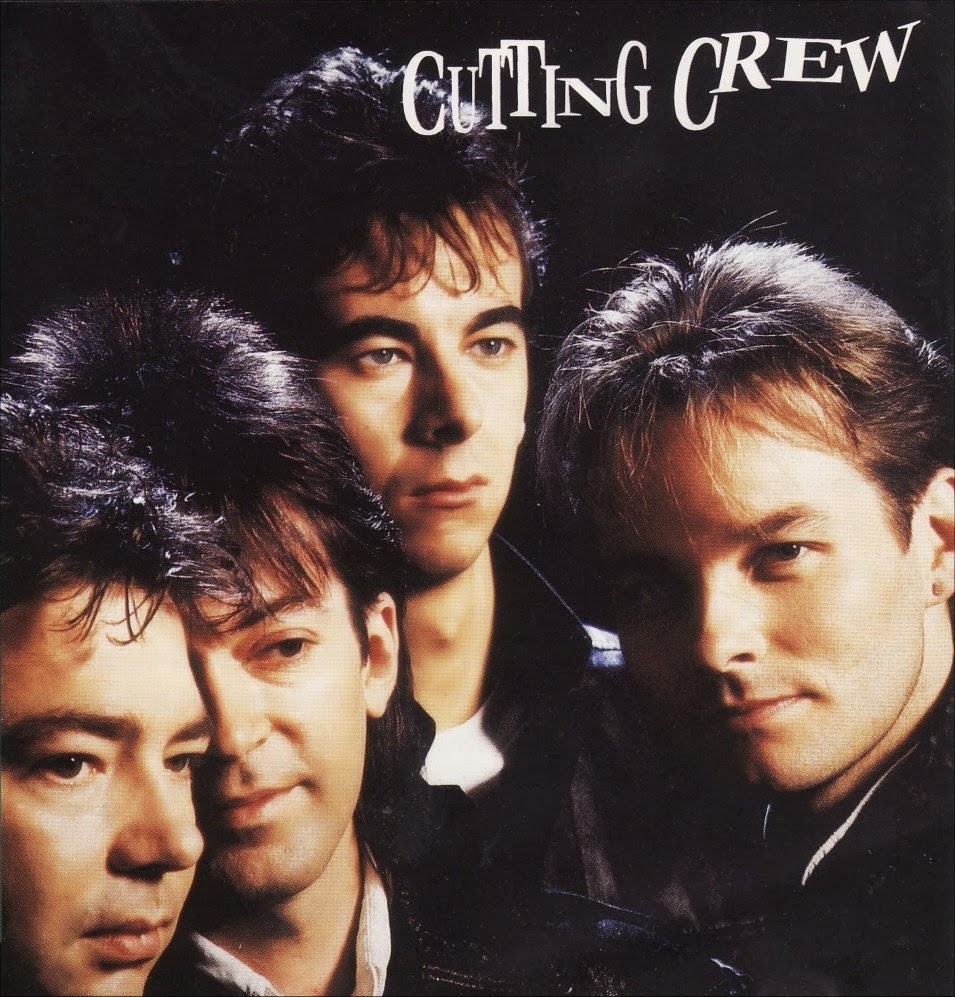 Cutting Crew released their debut album, Broadcast, in 1986. The group received mixed reviews from music critics, but not when it came to the album's undeniable highlight, the synth-heavy "(I Just) Died in Your Arms." The song became smash hit in the United States, reaching number one on the Billboard singles chart and enjoying similar success in the U.K. "One for the Mockingbird" and "I've Been in Love Before" also enjoyed significant radio play, and the band left home for a worldwide tour, standing in as opening act for such groups as the Bangles, Starship, and Huey Lewis & the News.
Cutting Crew released a sophomore album, 'The Scattering', in 1989. A third full-length effort, 1992's Compus Mentus, failed to revive their sagging popularity, however, and Cutting Crew called it quits the following year. MacMichael paired up with Robert Plant for the singer's 1993 solo effort, Fate of Nations, while Nick Van Eede chose to revive Cutting Crew the following decade. Featuring a radically different lineup, the group released Grinning Souls in 2006. [extract from http://www.allmusic.com]

Nick Van Eede reflects on the original lineup of the band on his website:

Colin Farley was a fab bass player from Surrey.  Loads of ideas, tons of experience and very musical.  He helped with every aspect of setting up and forming the band and crucially, he knew Frosty.  Frosty (Martin Beedle) was a (relative) youngster from Hull, Yorkshire who brought with him hilarity, energy and confidence and was ready to step up to playing rock music, after having played big band music for a few years.  My good friend Tony Moore joined as the coolest keyboard player, and there you have it.  Kevin & I wrote 7 songs, the boys added a few others, and within the year we had a Number 1 hit single all over the world &  the ecstatic farce continued.  After all those years of chipping away at the music business, it wasn't supposed to happen like this & not so fast and furious.  I never complained (obviously) but we were like frightened rabbits on those first Top of the Pops and Johnny Carson shows.
All those years of waiting and suddenly you're not prepared &  not that big &  not now &  maybe in a few months time???

All hell broke loose.  It was frantic, painful, and to be honest all a bit of a blur.We gave Richard Branson his first US Number one record for his fledgling Virgin US Record Company.  Six years of non-stop travel, pretty awards and the inevitable chemistry lessons!!!!  I loved our songs and our gigs, every single one of them.  I'd finally invented and steered my band to a position where the whole feckin' world had finally heard us &  and it felt &sadly &empty.  Frankly, apart from the love of the fans and the support we got from our friends/families and dearest allies in the biz, I found the so-called big time fickle and totally beyond any control. All those (apart from a few glowing exceptions) corporate managers, lawyers and accountants screwing and manipulating you because they had control of the money and contracts &the sad, inevitable, personal rows that sprung up &  and then suddenly it was over.  Cutting Crew RIP

Reviews
Cutting Crew never deserved the hacking they received from critics. Music reviewers lined up to throttle Cutting Crew's debut album, Broadcast, when it was released in 1986. The slick guitar rock on Broadcast may not have wowed the rock & roll intelligentsia, but it's a guaranteed crowd-pleaser, an underrated collection of simple, heartfelt love songs and up-tempo pop that reside between the stylistic boundaries of new wave and mainstream rock. "(I Just) Died in Your Arms" and "I've Been in 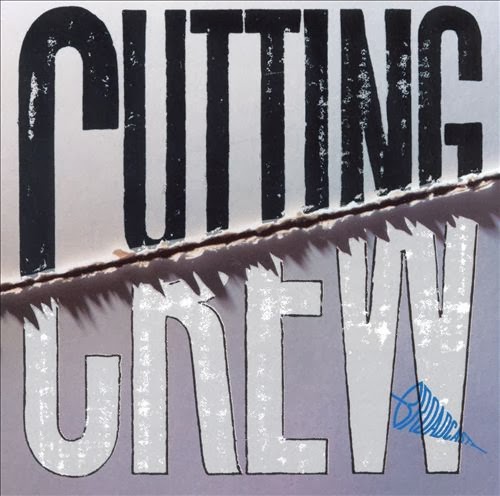 Love Before" immediately thrust Cutting Crew onto the U.S. charts; however, both songs aren't sufficient in summing up Broadcast's appeal. Nick VanEede's soulful croon is mesmerizing on "Any Colour" and "Sahara"; instead of bludgeoning the microphone with vocal histrionics common to late '80s rock, VanEede is thankfully restrained, imbuing every track with ample emotion. "Any Colour" should've been Cutting Crew's third hit, a moving tale of loneliness that easily draws the listener in, while the lovely "Sahara" captures the subtleties critics claimed Cutting Crew wasn't capable of. "One for the Mockingbird" and "Life in a Dangerous Time" are armed with stellar hooks. Cutting Crew somehow manages to incorporate guitar solos with the propulsive rhythms of U2 and the Fixx and the moody angst of Tears for Fears without sounding forced. Broadcast is not a creative breakthrough; it's simply an LP absent of any filler [ review by Michael Sutton at allmusic.com]

I don't think it's totally fair to write the Cutting Crew off as just another Eighties relic best left unearthed. For one thing, Cutting Crew were a band. It sounds a little silly to say that, but when we think of pop music (especially from the 80s), we think of a guy with funny hair holed up in a studio creating a "band" sound with computers, and maybe a little help from his friends Moog and Fairlight. 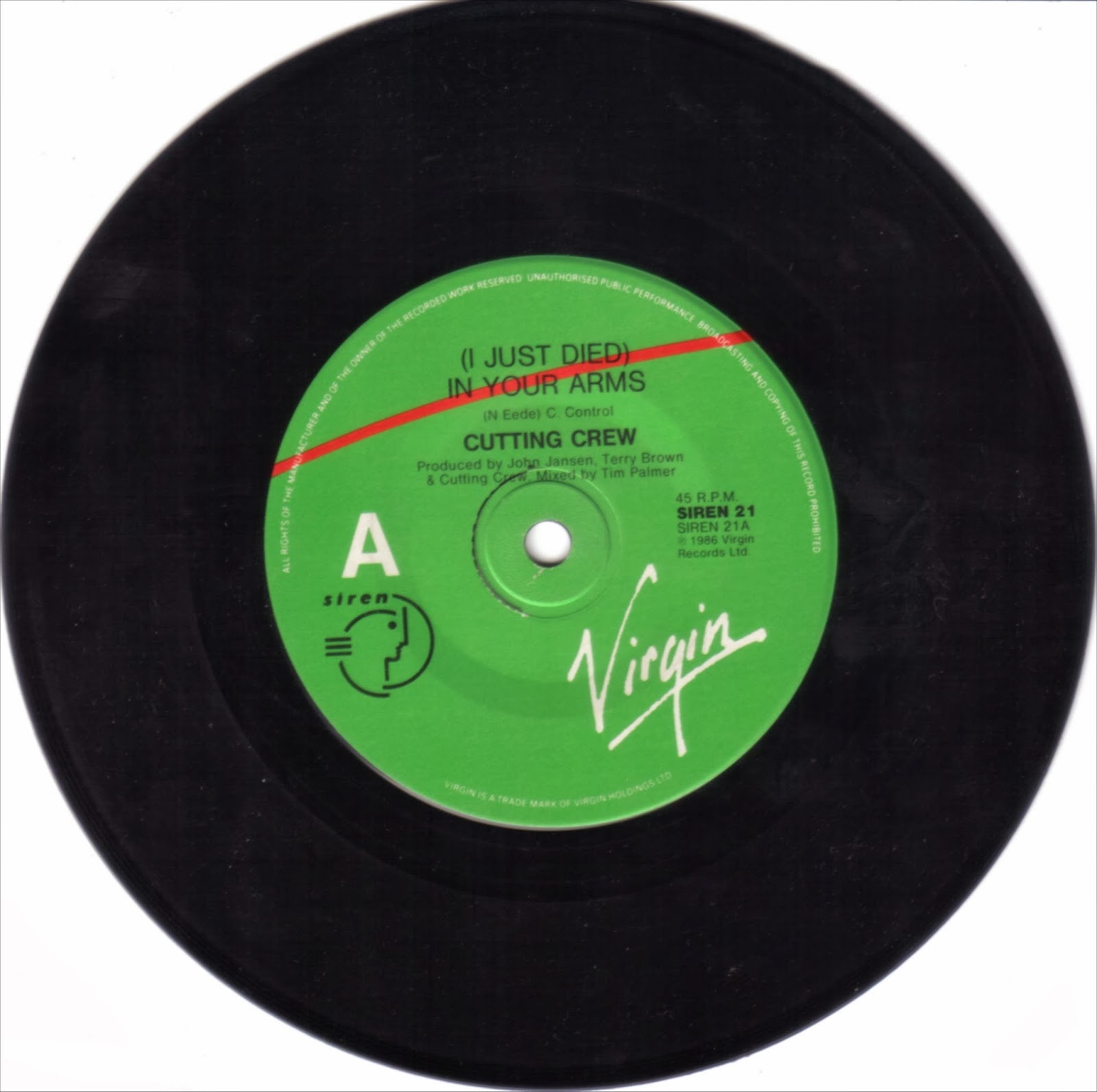 Not Cutting Crew. They were a band in the traditional sense - four guys who played instruments and stuff, with one guy who sang lead, and a couple of the others taking harmonies.
More than that, they were a talented band, who knew not only how to write their own songs, but how to put them together in the studio. Nick Van Eede has a singular, instantly recognizable voice of the love-it-or-hate-it variety, and wrote or co-wrote all of the songs. The rhythm section of Colin Farley on bass and Frosty Beedle on drums, lend a propulsive and dynamic sound to all of the songs, and Beedle's drumming is especially creative and layered.
And finally, there's Kevin Scott MacMichael on guitar, who delivers colorful lead work all over the album - his style is both rhythmic and melodic, and he had the chops to impress no less than Robert Plant, who hired MacMichael for his biggest post-Crew gig (in fact the biggest post-Crew gig any of them scored), playing guitar on and touring behind Plant's "Fate of Nations" album in 1993.
One hit wonder, my butt!
The sound of "Broadcast" is slick, but the production (by Terry Brown with the band) is detailed, intricate and layered, and at times, quite dazzling. This is a great sounding record, bringing hookfests like the sadly-neglected singles "Any Colour" and "One for the Mockingbird" into sharp relief and making them perfect soundtracks for a drive down the Interstate.
Even the two big hits the Crew are known for - "(I Just) Died in Your Arms" and "I've Been in Love Before" - sound really good after nearly 20 years, despite the fact that they were criminally over-played at the time of their release. 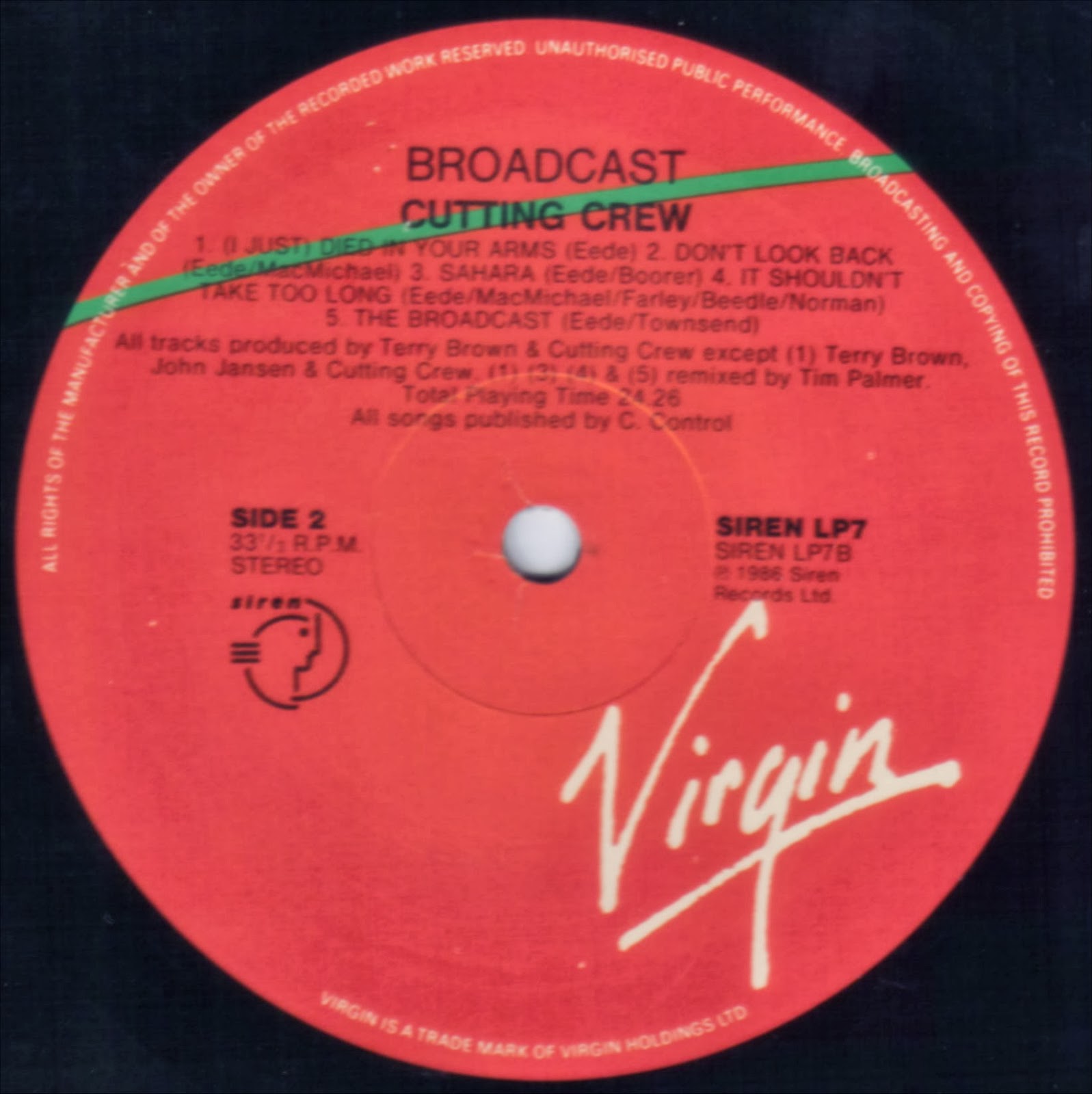 At times, the band tries a little too hard to be arty: "Life in a Dangerous Time" flirts with a prog rock epic sound, with military-style snare rolls, apocalyptic lyrics, and strategically placed power-chords. Of course, that won't stop you from singing along to the gorgeous falsetto chorus, but you will feel a little silly about it, thinking maybe this would have fit in better on something by Kansas or Asia.
Sometimes, however, their ambition pays off - especially on the six-and-a-half minute, album-closing title track, which is moody and atmospheric, never feels forced, and boasts one of the album's most sweetly affecting choruses sung once again by Eede in his clear and sympathetic falsetto."Broadcast" may never make Rolling Stone's 100 Best Albums of the 80's list, and it probably shouldn't, but that doesn't mean it's bad. It's simply a very enjoyable, well-crafted slab of mid-80's pop - totally innocuous, and certainly well worth downloading it here - so get yourself a copy now...
.
This post consists of a freshly ripped copy from my vinyl in MP3 format (320kps) and includes artwork for both vinyl and CD. Also included is the B-side to their hit single 'Died In Your Arms' which was not included the LP, entitled "for The Longest Time". Unlike most non-album B-Sides which are usually throw away tracks, this track is a great song and a lost gem.
.