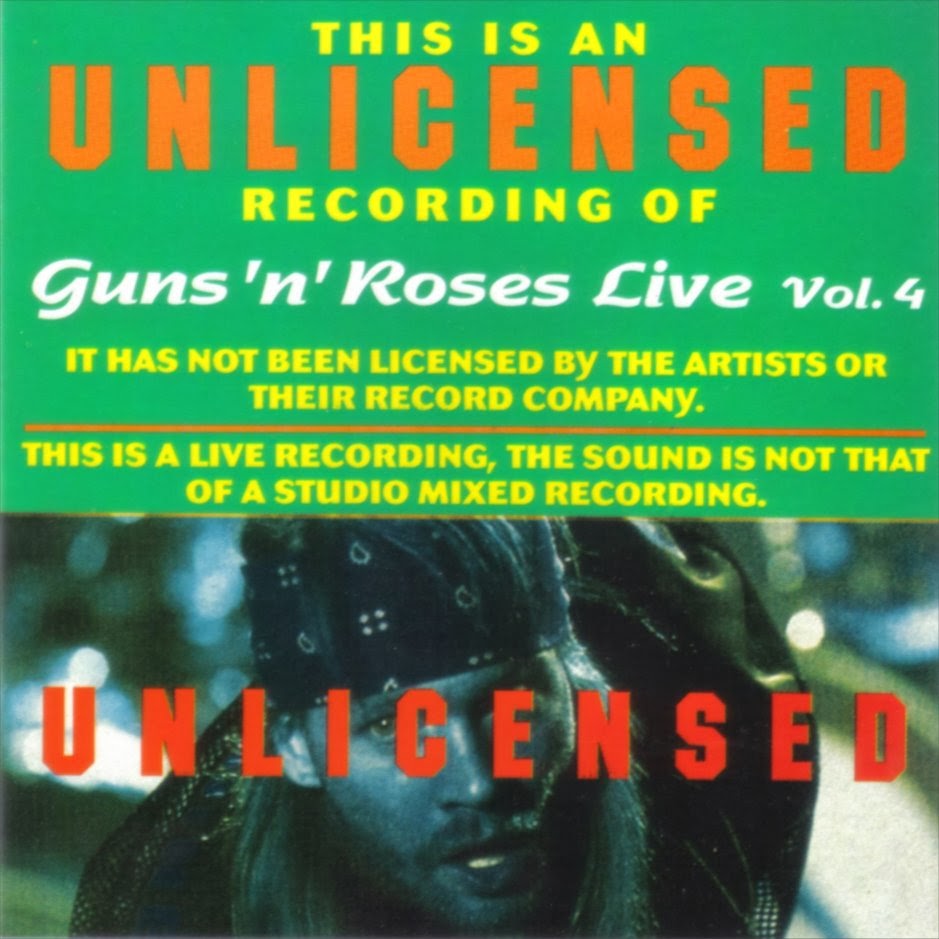 Guns N' Roses (sometimes abbreviated as G N' R or GnR) is an American hard rock band. The band formed in Hollywood, Los Angeles, California in 1985. Led by frontman and co-founder Axl Rose, the band has released six studio albums, three EPs, and one live album while going through numerous line-up changes and controversies since its formation.

1985-1990
Slash met Steven Adler in Los Angeles when he was 15, and they both decided to form Road Crew. Meanwhile, Axl Rose and Izzy Stradlin got together to play in several bands. They hired Duff McKagan, who came back from Seattle, to give their first concert as Guns N' Roses in April 11th 1985 in Anaheim, California. Slash and Steven Adler joined the band the following month and, after rageous openings for L.A. Guns, Poison or Faster Pussycat, Guns N' Roses drew the attention of Geffen Records who signed them on March 26th 1986 for the recording of seven albums.

The Gunners created their own label to release Live Like A Suicide, a first EP sold to 10,000 copies in four weeks. In early 1987, Guns N' Roses recorded Appetite For Destruction and the debut album was released rather confidentially in July 1987. The band opens shows for The Cult and Motley Crue and gives its first concerts out of the U.S.A.. Supported by a heavy rotation of the single "Sweet Child O' Mine" on MTV and an explosive onstage presence, Appetite For Destruction reached number 1 on the Billboard in 1988. It's with a well established reputation that Guns N' Roses opens for Alice Cooper, Iron Maiden and Aerosmith shows and takes part of the Monsters of Rock festival in front of more than 100,000 people.
While being on the cover of prestigious magazines and receiving several awards, Guns N' Roses's second album, GN'R Lies, is released in November 1988. Including the four recordings from Live Like A Suicide as well as four acoustic tracks, the album soon reaches the top 5 of best U.S.A. selling albums. 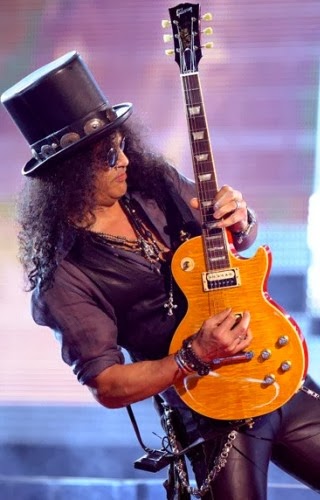 1991-1993
As recording sessions for the new album just started, Steven Adler, drugged out of his mind, is fired and replaced by Matt Sorum from The Cult. Around the same time Dizzy Reed, an old friend of the band, becomes the keyboardist of the group. Studio work is put on hold between January 20th and 23rd of 1991 as Guns N' Roses headlines two nights in Brazil in front of the 120,000 crowd of the Rock in Rio festival. On those nights, Matt and Dizzy appeared for the first time as full time members, and several new songs were played. The band then returned to the studio to finish the recording until they embarked on the Use Your Illusion World Tour in May 1991.
In July, the soundtrack of the movie Terminator 2 launched "You Could Be Mine" as the first single of the two Use Your Illusion albums which were finally released on September 17, 1991 and debuted respectively as number 1 and 2 of the Billboard charts. The success is global and it propels the band into the top rank of rock acts. So when Izzy Strandlin quits Guns N' Roses in the whole middle of the tour, the surprise is complete. He is soon replaced by Gilby Clarke. The endless tour is riddled with incidents: riots, late starts, cancellations, health or abuse problems, pouring rain, police raids... The last concert takes place in Buenos Aires on July 17 of 1993, after 197 shows given in front of more than five million people on the planet. [extract from Slash Paradise] 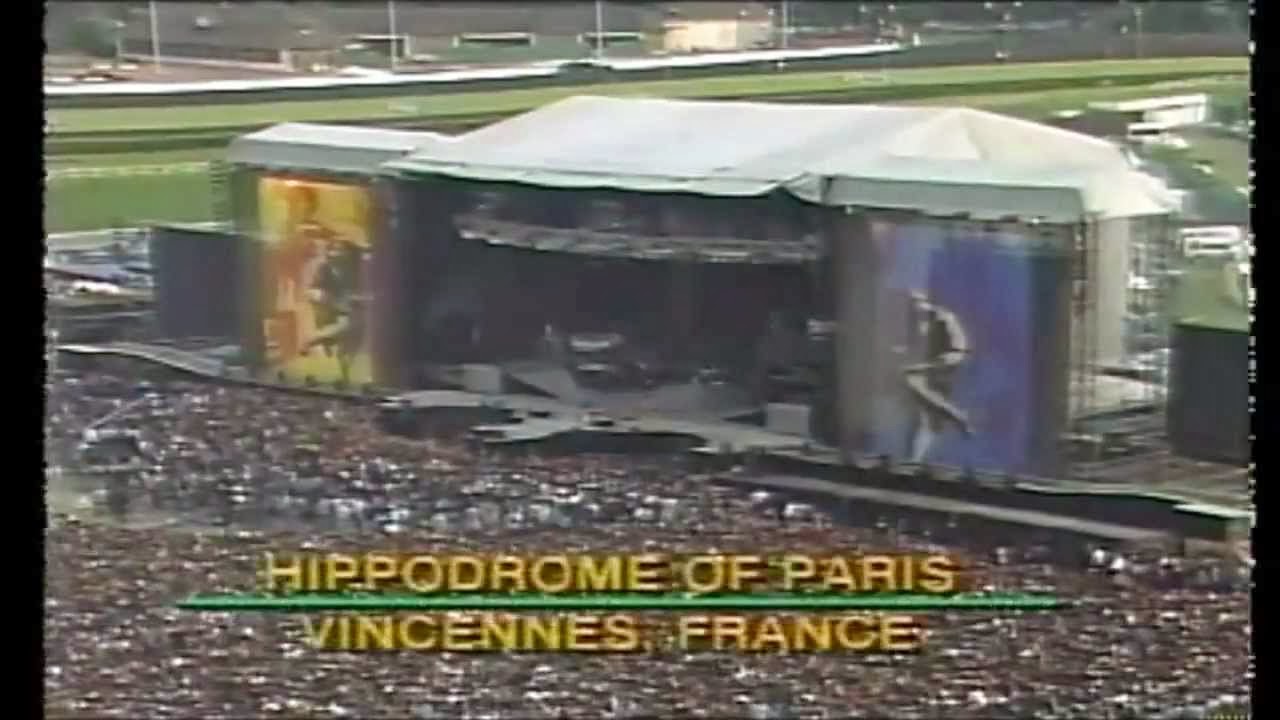 .
This CD, released on the AMCOS label, is a soundboard recording (2nd half of the show) made at the Hippodrome De Vincennes in Paris, on June the 6th, 1992. This concert was part of the "Get In The Ring Tour" 1991-1992 (142 shows in 26 countries). The recording has been graded as A+ quality and runs for almost 68mins (see heretodaygonetohell.com)
There have been other bootleg releases for this show, such as 'One In A Million', 'Le Beaux Gest' and 'La Vie En Rose' (see covers below).  This show has also been released on DVD and is considered to be one of GnR's best gigs captured in the 90's.  What makes this concert even more interesting are the guest appearances by Steve Tyler and Joe Perry (from Aerosmith) on the tracks "Mama Kin" and "Train Kept' A Rollin".  It is common knowledge that Slash has been a big fan of Aerosmith since he first started playing guitar and would have been thrilled to perform alongside his 'mentors'
. 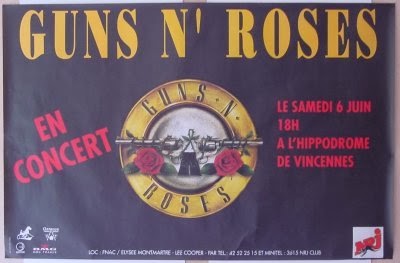