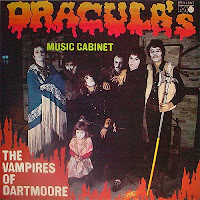 Rare as hen's teeth pseudo-soundtrack originally released on German label Metronome back in 1969. With the likes of  benchmark horror releases such as Polanski's 'Rosemary's Baby' and 'Witchfinder General' released a year before, this superb, creepy, super-sleazy gem fit the zeigeist of that time perfectly! Loaded with horror-heavy, proto hip-hop beats that even the likes of DJ Spinna exploited!  German jazz/library musicians Horst Ackermann & Heribert Thusek’s incredible, dark foray into the world of eerie samples & spine-chilling funk. Electronic effects,screams,moans for your kraut /psych Halloween party!

Dracula’s Music Cabinet was part of a wave of horror-themed novelty albums released in Germany during the late 60s and early 70s, all of which were seemingly inspired by the very type of horror films that Europe was producing at the time, as best exemplified by the work of our own beloved Jess Franco. The liner notes  of the album refer to it as a soundtrack to a nonexistent film, which is pretty much right on the money. Like the soundtracks to many Euro-horror films from the 60s, much of the music on Music Cabinet consists of vaguely psychedelic lounge jazz that in itself doesn’t suggest any traditional kind of horror ambiance at all.

Elsewhere, Cabinet‘s tunes veer toward the sort of jaunty, brass-heavy adventure themes that connoisseurs might associate with the work of Peter Thomas, and, with a track titled “The Fire-Dragon of Hong Kong”, even detour into orientalism. In other words, in a musical sense, the record is thematically all over the map, but all the same might serve as fitting accompaniment to the casual nudity and furtive, drug benumbed stabs at narrative coherence typical of those films that putatively inspired it. 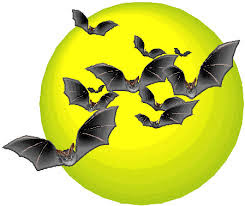 However, where Cabinet‘s makers – session player and library music composer Heribert Thusek, working for hire with radio comedian Horst Ackerman under the name The Vampires of Dartmoore – really put an effort into driving their concept home is in their employment of sound effects and voice, um, artistry. This consists not only of library effects, but also seemingly everything the pair could find in the tool shed or pantry, all layered over the musical tracks alongside an assortment of eccentric vocalizations. This practice leads to creations like the album’s opening cut, “The Torture Chamber of Dr. Sex”, which, if I had to assign a narrative to it, I’d describe as the sound of a man having his legs sawed off in a strip club, and perhaps liking it.

Of course, the two eventually end up going a bit off topic in their use of sound effects, as well. I really couldn’t tell you what, for instance, is meant to be so scary about the sound of cellophane rustling, or the frequent appearance of something that sounds like an electric pencil sharpener – or, for that matter, why a song titled “Dance of the Vampires” would prominently feature a recurring “BOI-OI-OINNG!” sound. Fortunately, there are enough screams and sounds of people falling down stairs or being shot sprinkled throughout to reign us back into Haunted House territory, and by the time we get to the closing cut of the album proper, “Frankenstein Greets Alpha 7”, we’re also treated to the sound of an out-of-control Theremin accompanied by a heavily accented voice shouting “Frankenstein!” at us. 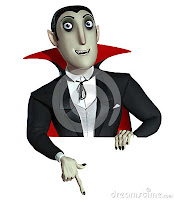 Dracula’s Music Cabinet makes for some pretty hilarious listening, though its reliance on audio gimmickry might somewhat limit its time on your iPod. Many of the underlying musical compositions are plenty enjoyable on their own, and, while it’s all the random moaning and shouting and pencil sharpening that gives the record its uniqueness, it takes a very specific sort to want to subject themselves to repeated listens. [review from savagesaints.blogspot].

OK, so you might think this month's WOCK of Vinyl post really 'sucks', but I reckon The Vampires Of Dartmoore are definitely Weird & Korny making them 'bloody' good candidates for this month's WOCK posting, so bite me !
.
Tracklist
01 - The Torture Chamber of Dr Sex
02 - Crime and Horror
03 - The Fire Dragon of Hong Kong
04 - Murder in the Ohio Express