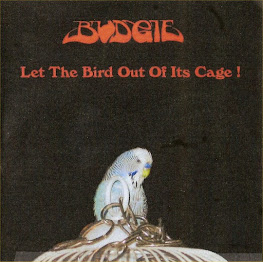 Although Budgie have got back on track and played some concerts in the last decade, it is still very difficult to find bootlegs of these concerts, usually because they are played in small venues packed with just a few people. On this one, Budgie played for an audience of about 300 people at the Roxy Theatre in Northampton PA USA. The sound is perfectly audible and has an almost perfect quality, except for some distortions in the heaviest parts. As for the songs played, there is a selection that goes from their debut album until 'Nightflight', and at that time they hadn't prepared anything new.
Although the date listed on the Artwork Cover says 23rd March, 2004, one of  Budgie's Fan Club Websites lists the gig as being 23rd April, 2004.
I'm inclined to believe the the Fan Club website, as they also list the previous gig being played at Sunken Gardens, San Antonio, TX, USA on the 20th April 2004. So I think this was a typo on the part of the original uploader.
With respect to the line-up, this is a rarity being the only bootleg that I'm aware of which features Simon Lees on guitar. So the line-up is, on the bass and vocals, as always, the original member of Budgie - Burke Shelley alongside Steve Williams - the drummer who was onboard since 'Bandolier', released in 1975 - and of course Simon Lees on guitar. 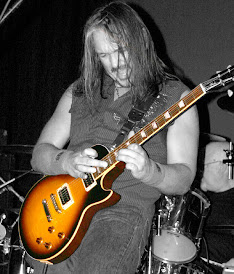 This bootleg is nothing short of brillant. The track listing for this gig covers all the standard tracks like "Breadfan", "Turn To Stone" and "Panzer Division Destroyed" but there is one special gem included that doesn't normally turn up on  live bootlegs - "Black Velvet Stallion". Lees sound affects at the start of this mystical power ballad are awesome, and only serves to reaffirm why he was chosen to fill the shoes of John Thomas, after Andy Hart's short stay.
Lees joined Budgie in February 2003 and recorded seven songs with the band which would later appear as bonus tracks on four of Budgie's remastered albums.  During 2005 and 2006, he co-wrote and recorded the Budgie album 'You're All Living in Cuckooland' (2006), with bassist and singer Burke Shelley at his studio in Cardiff. Lees played classical guitar on "Black Velvet" for the remastered Budgie album, 'If I Were Brittania I'd Waive the Rules'. He eventually left Budgie in July 2007, and was replaced by current axeman Craig Goldy (see above) 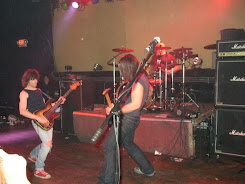 There are a few drop outs here and there in the show, but overall the quality of the recording is Soundbaord standard.
The rip is in MP3 format (320kps) and full artwork is included. This gig was recorded at the Roxy Theatre in Northampton PA USA in 2004 and was one of their last gigs in the US before heading off to Poland.  For a full tour listing by Budgie with Simon Lees as their axeman, see Budgie's Fan Club Website
.
Track Listing
CD1
01 - Intro (4'33)
02 - Panzer Division Destroyed (7'35) 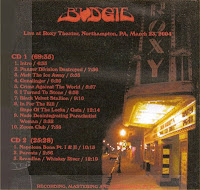