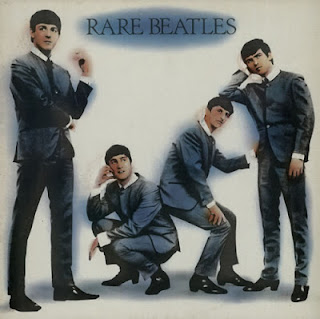 This album was released in 1982 on the Phoenix label. A ten track stereo vinyl LP compiling live recordings made at Hamburgs Star Club in December 1962, it is housed in a picture sleeve with a tinted colour version of a classic Dezo Hoffmann photograph, making it look almost like a bootleg - however this is an official release.
The album collects some recordings made by Ted Taylor at the Star Club in Hamburg, probably in December 1962. These recordings were made on a portable machine, so the sound quality is somewhat mediocre.
There were two releases: one in the UK and one in France; this is the UK release from January 22, 1982. There are ten songs, none of which were written by any of the Beatles themselves (ie.all covers) and were recorded at the Star Club in Germany.
.
The Beatles first visited West Germany in late 1960 when the group's line-up was still John Lennon, Paul McCartney, George Harrison, Stuart Sutcliffe (who was to die tragically young) and drummer Pete Best. Playing in Hamburg either made or broke every Liverpudlian beat group that worked there but it was soon obvious to everyone that this was one group which would be going places. After returning to Liverpool in early 1961 to do a residency at the now-legendary Cavern Club, the Beatles made a second trip to Hamburg in April 1961 during which visit they recorded several titles with Tony Sheridan for a German Record Company. It was during one visit to Hamburg that these tapes originated and, as luck would have it, although Ringo Starr did not officially join the group until August 1962, which was just about the time the Beatles were having their first recording sessions for EMI, he happened to be 'sitting in' for Pete Best on the very night that Ted Toylor decided to make some recordings with his portable machine.

No matter how many thousands of words were written about the Beatles, the only way for anyone to appreciate their full appeal is to listen to the music. It explains everything. The Beatles' music has managed to span every generation and as ambassadors of pop, no one is likely to beat them. The Star Club recordings tell all. The music is raw, vital and exciting and goes a long way to demonstrating why John Lennon, Paul McCartney, George Harrison and Ringo Starr become such musical legends. The humor, the sheer talent and the audience excitement almost hits you in the eyes...
Until now these tapes have been heard by no more than a handful of people but it is right that these Hamburg moments should be shared with the millions of Beatles fans worldwide. Four years ago the respected British pop musk magazine Melody Maker reviewed the Hamburg tapes as they were in their original state and declared that the music neither injured the reputations of the artists or insulted the intelligence of the listeners. The writer declared that the recordings were a "unique and important announcement" of the most musical unit of the lost decade. More than that they are history and provide the best insight into the early life of the Beatles which most people had thought lost for good.
[Sleeve notes by Chris White London, March 1977]
. 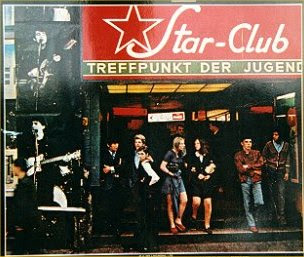 .
The Star Club Recordings
The first release of tapes from The Beatles German stage show recorded 31st December 1962.
These tapes were recorded by Adrian Barber on a mono Grundig reel-to-reel tape recorder using a hand-held microphone. He had been asked to make recordings by Ted "Kingsize" Taylor, a Liverpool singer who sung with the Dominos. Once the Beatles has some commercial success, Taylor offered these tapes to Brian Epstein, but Brian would only offer as much as ?20 for them as he felt they had no comercial value. Little did Brian realise, but the tapes did in fact legally belong to Parlophone anyway, as they had been made AFTER the signing to E.M.I. of their contracts, but there was some confusion over the date of recording of the tapes. Although, once again, listening to them, it was clearly December 1962 ... John mentions Christmas between songs, and Buddy Holly's "Reminiscing" had only just been released in late 1962. 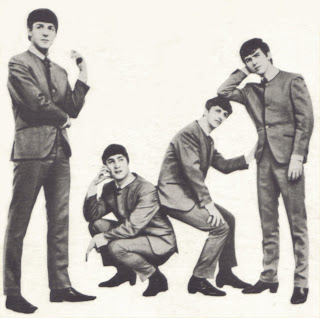 They then lay in derelict ofices until 1972 when they were found under piles of rubbish by Allan Williams who had managed the Beatles before Brian. Williams offered the tapes to George and Ringo for $5,000, but at that time Apple were going through financial difficulties so they too turned them down.
.After spending $50,000 on cleaning up the sound, and transferring them to 16-track tapes, Williams found a buyer and the first release was in Germany. Immediately the Beatles sued, but lost the case because the judge ruled that the tapes were of historical interest, they were not trying to fool anyone by pretending it was a new release (the records clearly stated "old recordings"), and, the Beatles should have sued earlier and not left it until a release was imminent. 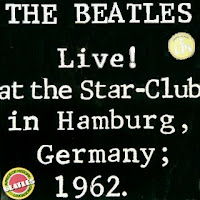 33 songs are apparently on the tapes, but 26 only appeared on the release. But the U.K. version of this album (and German version) had 4 tracks different to the U.S. version, which of course meant that the four "missing" songs in the U.K. often turn up as long lost rarities. The missing four were :
"Where Have You Been All My Life"
"Sheila"
"I'm Gonna Sit Right Down And Cry Over You"
"Till There Was You".
Two other tracks were alternate versions of "To Know Her Is To Love Her" and "Roll Over Beethoven", which obviously weren't required as the best versions were used.
This means one track is left, "My Girl Is Red Hot" which has never appeared anywhere !

Unfortunately, the finished article caught the Beatles just as they were about to release "Please Please Me" in Britain, and clearly the thoughts were on home. Their lack of enthusiasm comes across in the introductions and comments between the songs and of course the recording quality is still very poor.
BUT this is an essential historic document.
In 1981, after the Lingasong release was deleted, the rights to the tapes were again sold and again were treated to a further re-mix providing a bit clearer sound yet again. But the new owners Audio-Fidelity spoilt re-releases with cheap packaging and labelling errors. The pictured sleeve is the original release on Bellaphon catalogue number BLS 5560 as this came out one month earlier and I had already purchased this version. The first C.D release was 16th December 1985, all 30 tracks on Overseas Records, catalogue no. 38CP-44 [extract from Graham Calkin's Beatles Pages, 2006] 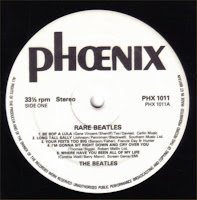 This post consists of an MP3 rip (320kps) taken from my near mint vinyl and includes full album artwork plus label scans. Although the quality of the recording is average, one must keep in mind when these tapes were made and the limitations of the recording equipment at that time.
If you haven't heard any early Beatles material before, then this album is a great place to start, with all tracks being covers by artists that the Fab Four looked up to when they were starting out.