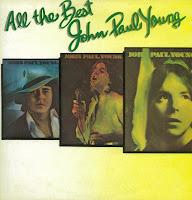 In 1972, John Paul Young put his fishing trips and his job at Clyde Engineering on hold because his single “Pasadena” was a massive hit.

Working in the company of the Vanda and Young team, John (JPY) became one of the biggest Australian stars of the 70’s and his career has progressed through the 80’s, 90’s and into the 21 Century.

There’s not much of John’s career that hasn’t already been documented: a string of hits spawned over 4 million record sales, a couple of King of Pop awards (The ARIA of their day), a Logie and a bunch of radio and TV awards from around the country and overseas.

When John released his fourth single, Jesus Christ Superstar had ended and Harry Vanda and George Young had returned to Australia as house songwriters and producers for Albert Production. The song they now wrote and produced for John Young was "Yesterday’s Hero", about someone who had once been famous. He performed the song on Countdown and by the time filming was finished he had convinced the audience he really was a star! "Yesterday’s Hero" was initially released as John Young, but became such a major hit, the singer became John Paul Young to avoid confusion with Sixties pop star, Johnny Young.

John Paul Young went on to became a Countdown regular, both as guest and performer, his easy going boyish personality making him a favourite with fans.  It was Countdown's compare Molly Meldrum who first introduced John as 'Squeak' and the name simply stuck.


More major hits followed – namely "The Love Game", "I Hate The Music", "I Wanna Do It With You", "Standing In The Rain" (all Top 10 hits) and his June 1978 No. 1 song, "Love Is In The Air", also a huge hit internationally, leading to television performances on Britain’s ‘Top Of The Pops’ and in the US.

For his live performances John Paul Young gathered The Allstar Band, boasting some of the finest musicians in the land, testament to John’s standing with his contemporaries. Warren Morgan (Chain, Aztecs) and Ronnie Peel (La De Das) are The Allstar Band’s longest-serving members who together with Greg Plimmer, Juan Gonzalez and Michael Walker still make up the band today.

JPY’s music certainly was the soundtrack to the “Countdown” generation, and in 1992 a whole new generation fell in love with his music with a remixed version of "Love is in the Air" from the soundtrack to Baz Luhrmann’s Strictly Ballroom becoming a hit all over again.

JPY’s ability to vary from a light pop to an edgy rock pop voice and his sparkling personality gave a particular stamp to a special type of Australian pop – one that found hits throughout Europe and South Africa. As a performer John was hard to beat, and remains so. There are few people who enjoy playing music as much and who give the audience their all.

After featuring in the TV Series “Long Way To The Top” John and The Allstar Band climbed aboard for the 2002 National Tour of the same name in the company of the cream of Australian talent to celebrate the music and its Stars of the 60’s, 70’s & 80’s.

In 2003 and in 2005 “Leader of the Pack – The Ellie Greenwich Musical” has seen John beatin’ the boards in the character of fast talking record producer Gus Sharkey - a composite character based around the legendary team of Leiber & Stoller and later Phil Spector with whom Ellie worked and spawned massive worldwide hits with: Be my Baby and Baby I love You, Da Doo Ron Ron and Then He Kissed Me, Doo Wah Diddy and I Can Hear Music, River Deep, Mountain High and the title of the musical Leader of the Pack. This is John’s first musical since his roll in “Jesus Christ Superstar” and he’s relished the part in both the Sydney & Melbourne seasons.

He had an 18 months stint with the Popstars TV series; a return to the racing track in the 2005 Celebrity Race at the Melbourne F1 GP - another credible finish from a start back in the field - and in between, recording with his long time friend, producer and songwriter Harry Vanda, for the future album. 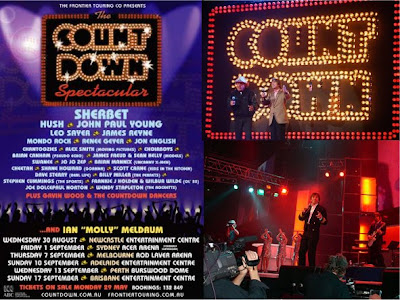 In 2006, JPY performed in the first Countdown Spectacular. This event was a reunion concert for many of the popular Aussie acts that had performed on Countdown over the years and it toured Australia over August-September of 2006. JPY was honored by being the first artist to open the show performing his hit single "Yesterday's Hero" and captured the theme of the event perfectly. 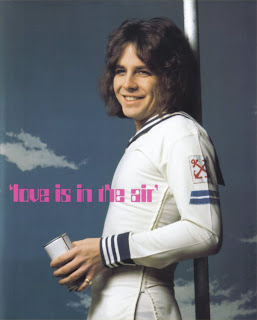 This post consists of MP3's (320kps) ripped from my vinyl LP and includes full album artwork. I have chosen to include 3 bonus tracks to complete this collection.  "You Drive Me Crazy" was JPY's second single (1973) and is a bit of a rarity as it did not appear on any of his albums.  "St.Louis" was the B-Side of "The Love Game" (1975) but could have easily been an A-Side single in my opinion.
Although "Love Is In The Air" was released in 1978 (one year after this compilation was released), it needs to be included as it was the song that relaunched his career many years later when it was used in the highly successful movie 'Strictly Ballroom', reaching #3 in the Australian Charts.
JPY or Squeak was a wonderful ambassador and mentor for many of the 'new young' Australian musicians who appeared in the late 70's - early 80's and is still highly regarded in the music industry today. This post is a tribute to the legacy that JPY has provided Aussie Rock over the years.
.