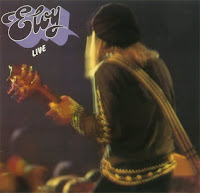 Eloy is a German progressive rock band, whose musical style includes symphonic and space rock, the latter theme being more prevalent on earlier albums. Despite their nationality and time period, the band is not generally considered krautrock because of their sound, which has much more in common with English progressive rock groups such as Pink Floyd, King Crimson and Yes.

Founded in 1969 by guitarist Frank Bornemann, the band has endured several line-up changes, with Bornemann being the only consistent member of the group. In the 1980s, after a series of major splits in the group, Bornemann pursued a more commercial direction. Despite attracting a large following in Germany, the band never gained popularity in the United States. However, in later years, former members of the band re-joined, and in 1998 released the album Ocean 2, a return to the classic symphonic progressive rock genre for which the band was well known. 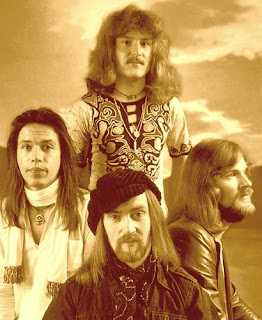 Bornemann described the origin of the name of the band thus: "The name Eloy is based on the book 'The Time Machine' by H.G. Wells. Wells describes in his book the situation of mankind about 800,000 years later, and 'Eloy' is a human race in his story. The Eloy in Wells' story have made a new start with the help of the time traveler.

In a way, it was a new beginning for the human race. German rock bands in the late 1960s played mainly covers from other bands instead of playing their own compositions. Record deals for German bands were absolutely rare and German bands generally were considered to be second class bands in their own country. At that time it was a strong effort for a German band to come out with only their own compositions. It was a start into an unknown future, and from this point of view, comparable to the human race in Wells' story. That is why I got the idea to name the band 'Eloy'." [extract from wikipedia] 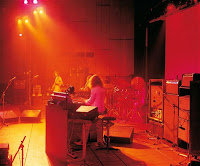 In 1978, Eloy released their sole live album, at a time when most progressive bands were either going commercial or altogether disbanding. Eloy however were at the peak of their popularity in their homeland of Germany. The band was famous for elaborate stage shows featuring copious laser lights, dry ice machines and plentiful pyrotechnics. Eloy live sounded so more powerful: strong and flowing guitar work, lush keyboards and great shifting moods.

Live compiles some of the band’s best loved compositions to date and very often, the live versions outshine their studio counterparts. Most of the classic “Ocean” album is represented here (it was recorded during the Ocean promotional tour after all) as well as choice cuts from Dawn, Power and the Passion and the title track from Inside. 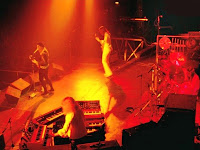 The narration from the studio version of “The Dance in Doubt and Fear” is gone and given mostly an instrumental treatment. However, there is some narration on other cuts. The closing track, “Atlantis’ Agony at June 5th-8498, 13 p.m. Gregorian Earthtime” is extended to twenty plus minutes of spaced out bliss and leans towards the cosmic side of compatriots Ash Ra Tempel, Mythos and perhaps Tangerine Dream.

The only significant flaw of the album is that it feels a little too cut and paste. Each track fades with Frank Bornemann cheerfully eing “danke schon!” so that the songs generally don’t segue or flow very naturally. On the other hand, Live is not at all a bad place to introduce a novice to the music of Eloy. The sound quality is fine given the age of the master tapes. 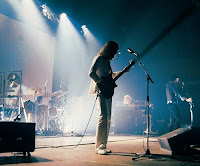 One of the hidden treasures from the Prog island, recorded in 1978 on tour, on the waves of unique and excellent “Ocean”, it captured Eloy in a conceptual concert based on story of rise and fall of Atlantis, as a reminder of what could happen in the end to us all. Lineup that would make one more progressive gem, 1979 “Silent Cries and Mighty Echoes”, have made an ethereal atmosphere, saved on this record. Spoken introductions, long instrumental passages based mostly on keyboard sound together with melodic bass lines and crying guitar solos, and simple but captivating singing with mystical and unreal lyrics, carries listener to voyage to outer space of mind. 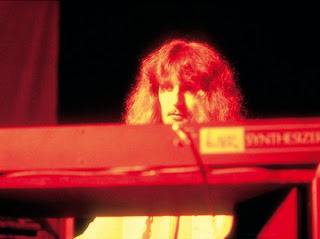 In music of Eloy, all musicians and instruments have their leading and supporting roles. Even bass and drums are used not to be rhythm section, but to contribute in making a spacey atmosphere. Songs are interpreted close to studio versions, and I believe there are two main reasons for that. First is that studio versions are already long enough that there is no need to prolong it by unnecessary improvisations, and the second was intention that lineup that recorded studio version must be in position to play it live on scene, for it is one of the characteristics of progressive music. The only thing that may be under someone’s expectations is singing in English with strong German accent, but that’s how the story goes when someone sings in foreign language. Lineup present on this live record is one that is responsible for great studio issues in 1976-1979 period, with only guitar player left from past times and who would waves the Eloy flag to present times. 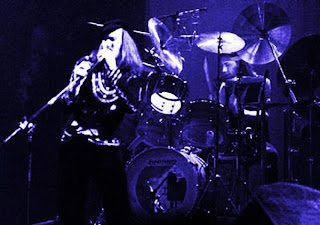 The record starts with first half of 1977 “Ocean” album. “Poseidon’s Creation” opens with brief spoken prologue, not present on studio version, and after 5 minutes of instrumental introduction to song and 3 minutes of sung introduction to story, ends with 3 minutes guitar solo. “Incarnation of Legos” is introduced with 4 minutes of mutually sung and spoken words, and after 2 minutes keyboard solo, ends with 3 minutes keyboard and vocal part. Music continues with two tracks from 1976 “Dawn” album. Keyboard and bass dominated “The Sun-song” is prolonged 4 minutes with German spoken introduction, while “The Dance in Doubt and Fear” contains some fine guitar and keyboard soloing. The middle part ends with classic “Mutiny” track from 1975 “Power and the Passion” album, and with “Gliding into Light and Knowledge” keyboard and vocal song from “Dawn”, flawlessly leading into more guitar soloing “Inside” from 1973 “Inside” album. Record concludes with last and longest track from “Ocean”, “Atlantis’ Agony” that starts with 10 minutes spacey keyboards intro interrupted occasionally with few spoken words, and after some fine bass supported chanting and keyboard soloing, ends with keyboards harmonies, guitar soloing, singing that once again reminds us that “we are particles in the ocean”, and finally keyboard and guitar conclusion.

I must say that I had luck to met a friend at the start of 80’s who introduced many German bands to me, like Eloy, Jane, Grobschnitt, Brainticket, Birth Control, Nektar, Epitaph, and to this very day, those music stayed as something special, quite good, and at the same moment quite different from other progressive groups. And among them, Eloy always had a special treatment. That’s the reason why this review is somehow longer, for music absolutely deserves it.

I recommend this record to everyone who already likes 70’s sounding Eloy, for it successfully captured band alive at the peak of creativity. For ones who are new to Eloy, first try albums from 1973-1979 period, and then if you like them, try this one.

Having bought a few of their albums in the 70's I was ecstatic to hear that Eloy had released a double live album in 1978.  However, none of the import shops in Melbourne had stock and I was desperate to obtain a copy. Luckily, a friend of mine was going to Germany for a holiday with his family and I promptly asked him a favour to pick up a copy of Eloy Live for me while he was there.  The album cost me $35 which was a small fortune in those days (especially with the poor exchange rates that the Australian dollar was getting) but it was well worth it when I finally listened to it.  In fact, German pressings were always very expensive from the Import Shops (as were Japanese pressings) however the quality of the pressings were always superior to those made in Australia, making the extra cost worthwhile.
So, here is an MP3 rip (320kps) taken from my treasured vinyl copy and includes full album artwork plus label scans.  This is a great live album and should not be missed. 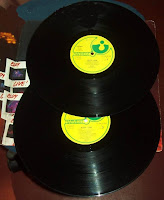