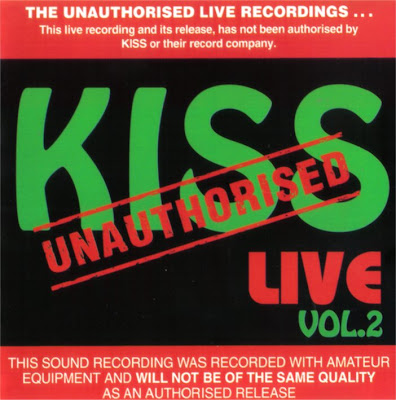 Other titles for this bootleg are:
'Kiss Destroys Anaheim - Part 1 (1976)' and 'Kiss Live In Anaheim' (1976).
.
Kiss is an American rock band formed in New York City in January 1973. Well known for its members' white and black face paint and flamboyant stage outfits, the group rose to prominence in the mid to late 1970s on the basis of their elaborate live performances, which featured fire breathing, blood spitting, smoking guitars, shooting rockets, levitating drum kits and pyrotechnics. Counting the 1978 solo albums, Kiss has been awarded 28 gold albums to date, the most of any American rock band. The band has sold more than 40 million albums in the United States, of which 20 million have been certified by the RIAA and their worldwide sales exceeds 100 million albums. The 1973–'80 original lineup of Paul Stanley (vocals and rhythm guitar), Gene Simmons (vocals and bass guitar), Ace Frehley (lead guitar) and Peter Criss (drums) was the most successful [extract from wikipedia]. 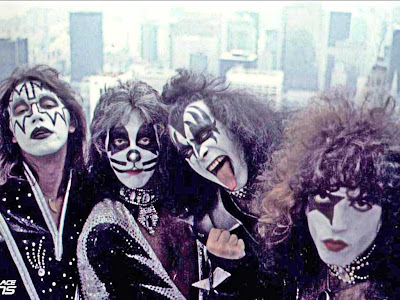 The Kiss Destroyer tour of 1976 resulted in quite a few bootleg LPs, the headbangers' August 20, 1976 show at Anaheim Stadium in Southern California gave us Kiss Destroys Anaheim, Parts 1 and 2. Instead of putting out a two-LP set, the illicit Idle Mind Productions (a prominent bootlegger of the 1970s) chose to release two separate LPs. On both LPs, the sound quality is OK--not fantastic, not terrible, but OK. Though Kiss Destroys Anaheim, Part 1 doesn't have the quality of a soundboard recording, one gets the impression that the bootlegger taped the show using a high-quality portable stereo recorder that he/she managed to sneak into Anaheim Stadium. This LP wouldn't win over an audiophile, but even so, performances of gems from Destroyer (including "Shout It Out Loud" and "Do You Love Me?") as well as "Firehouse," "Cold Gin" and "Black Diamond" capture the excitement of the Destroyer tour. Kiss Destroys Anaheim, Part 1 isn't the ideal document of that tour, although collectors were glad to acquire it anyway. 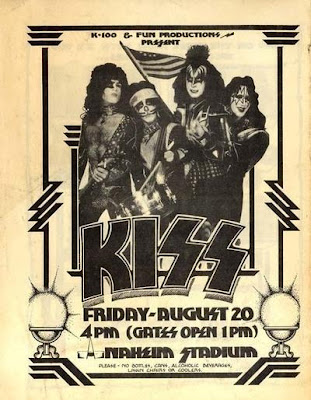 A year and maybe the big breakthrough after Alive sold huge amounts during 1975. August 20 1976 Kiss played perhaps the largest audience in the 70s. Prior to this gig extended the effects in the form of a larger light rig and a big firework display followed the final Encores. AMI-mounted single-camera video recordings with close-ups for 2 large video screens placed in the arena. Besides the well-known video footage, circulated "Black Diamond" with this recording, great stuff! Perhaps the most famous Kiss Boot existing is Destroys Anaheim that was first released in the 70s and then in a number of re-releases on vinyl edition. The best CD version can be found in Kiss - Kartoon CD Box, released by Godfather Records in its entirety. The rarity, however, is the colored vinyl releases, and today an expensive purchase. Not to forget the re-release on Blue vinyl that do not have the same value to collectors. [extract from kissbootleg.com]
. 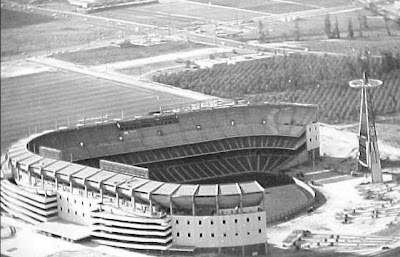 Angel Stadium of Anaheim (originally Anaheim Stadium and later Edison International Field of Anaheim) is a modern-style ballpark located in Anaheim, California. It is the home ballpark to Major League Baseball's Los Angeles Angels of Anaheim of the American League, and was previously home to the NFL's Los Angeles Rams (now St. Louis Rams). The stadium is often referred to by its unofficial nickname The Big A. The stadium can seat up to 40,000 patrons (see pictured right - 1980)
.
The following is a rather raunchy interview with Gene Simmons published in Rolling Stone April, 1977 (#236) during their Alive II tour (while they were passing through London).
.
With Kiss shows being compared to the Normandy invasion, the lords of cartoon metal are caught on the run in Detroit. Before the decade is over, they will become the biggest live band on the planet.
Gene Simmons, dressed in a blue bathrobe in his hotel suite, asks, "Would you like to see my collection?" He pulls about 20 Polaroid snapshots out of a suitcase and drops them on the desk in front of me. Each is a groupie posed in a spread shot or other equally imaginative position. The bodies range from beautiful to grotesque. "Names, dates and places are written on the back," he says. "Those are just for this tour."
"You must have strange diseases," I finally say.
"Never."
"Did you ever do it with anyone famous?"
Humming "We've Only Just Begun", he walks into the adjoining room. Star Stowe, the February Playboy foldout, and a Bunny friend of hers emerge giggling from the bathroom. Stowe wears black panty hose with holes ripped in them, skimpy blue-jean shorts and a Kiss T-shirt a couple of sizes too small. I recognise her from a Polaroid.
After a few minutes of distressed discussion, Simmons dismisses them with a curt, "Why don't you do what females are best at doing?" They immediately quiet down, so presumably that is what he thinks they are best at doing.
"We're not a great band," Simmons says, turning his attention back to me. "The musicianship is average, maybe even below, but in a year we're going to be the biggest band in the world. Two hundred million Americans out there don't appreciate subtleties. They want to be sledge-hammered over the head with clear issues and no pussyfooting. Remember, it was mass culture that created rock & roll. Our tastes coincide with theirs." - Charles M Young, Rolling Stone Magazine
. 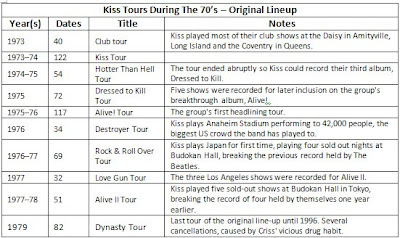 .
This post consists of a rip (320kps) taken from my Australian 'Joker' CD release and includes full album artwork for both the CD and earlier vinyl bootlegs listed at the start of this post.
Note: I also have the Kiss Unauthorised Live Vol 1 release (taken from a different concert), however, I refuse to post it on my blog as it is one of the worst bootleg recordings I've ever come across. If you come across it, then don't even bother - its utter crap!
.
Track Listing 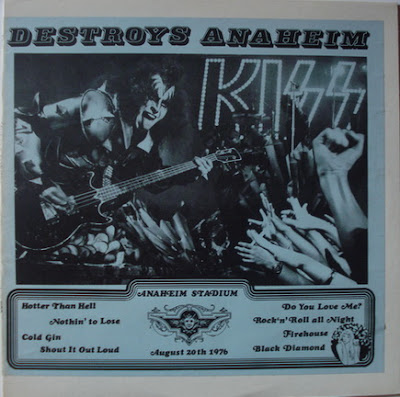