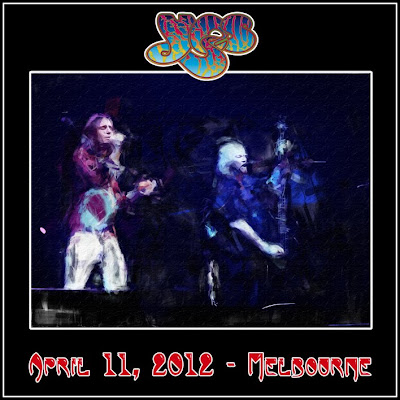 Returning for the first time since 2003, Grammy Award winning progressive rock group, YES, made their highly anticipated return to Australian shores in April 2012 for a few special theatre shows and a performance at the infamous Byron Bay Bluesfest.
The tour kicked off in Byron Bay when YES took the stage at Bluesfest on Monday 9 April, before heading down to Melbourne for a show at the Palais Theatre on Wednesday 11 April and then winding up in Sydney on Friday 13 April at the State Theatre.
Forming in London in the late 1960s, YES are regarded as one of the pioneers of the progressive genre. They are known for their classically-influenced arrangements with extended song lengths, unusual time signatures, three-part high vocal harmonies, virtuoso musicianship, eclectic blend of musical styles, dramatic dynamic and metrical changes, abstract lyrics, elaborate album art and enigmatic live stage performances. 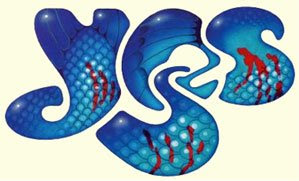 Having sold close to 50 million albums worldwide, their status as one of the most successful bands in America throughout the 1970s was solidified when four of their albums were certified Platinum and another three albums reached Gold status. And their number one hit single, "Owner Of A Lonely Heart", held the top spot on the main charts in 1983 as well as becoming a hit on the R&B and disco charts.
.
The current line-up is comprised of bassist Chris Squire, guitarist Steve Howe, drummer Alan White, keyboardist Geoff Downes, and singer Jon Davison, who is a new comer to the band (replacing front man Benoit David), having joined after the release of their latest album 'Fly From Here' – produced by legendary musician and producer Trevor Horn.
And more than 40 years since their inception, Australian audiences were able to see YES perform tracks from their indelible catalogue of hugely successful hit albums, such as Fragile, Close To The Edge, Drama and 90125.
. 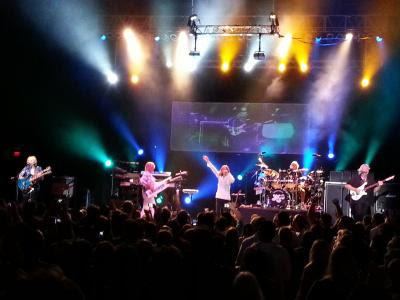 Concert Review
This is the identical set as with the NZ and Perth shows although Machine Messiah was sometimes played in place of Heart of the Sunrise. I believe the songs were longer in the Melbourne live set due to no opening act. The set list was a fantastic double act by the headliners as the ‘Friends’ that were supposed to be there were cancelled. This meant a two act Yes extravaganza.
.
The band were flanked by lights at the beginning with a classical suite to usher them on. The screen that hung above them was certainly effective though mostly showed psychedelic effects, flashy lightning bolts, colour bars, or rotating Yes logos. Often the band were shown on the screen but always overlayed with lighting effects. I would have preferred to see the band throughout the show as up the back of the theatre the band were tiny figures. They did not move about too much though Squire did his usual leg movements, standing on one leg Ian Anderson style, or shuffling across the stage and spinning. Squire did sing harmonies with the others and sounded fine to me. Howe was on his custom piece of rug and moved off to produce some electrifying lead solos. He was wonderful on the slide keyboard during "And You And I". He even jumped a few times at the end of the concert and sometimes raised his hand up to show his appreciation to the crowd.
.

Geoff Downes was great and remained surrounded by keyboards though he came out to play a roaming keyboard solo. Alan White drummed his heart out and only moved from the set to bow at the end. The new member Jon Davison, from Glass Hammer fame, swayed gently to the music, banged a tambourine lightly, or a shaker and generally moved gracefully around the stage. The big question was would Jon be able to reach the high notes and would his vocals do this incredible music justice? I am pleased to report that he was absolutely fantastic. Jon’s voice was spot on, the man can sing as good and perhaps better than Benoit, now a distant memory. I am glad Jon was so passionate as he really added to the experience. He stood out as the youngest member among all the grey hairs, but he looked and sounded terrific. A lot of the crowd at half time were chatting about how amazing Jon’s voice was.
. 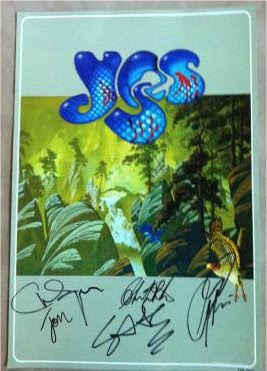 The songs were played with the same vibrant passion as on the studio releases. All the classics were played and a huge slab from their new album. The lights were coloured standard spots, blue lights, to green and some red and purple but mostly it was bright white rays of lights that shone out. Occasionally house lights were flashed to encourage audience participation such as singing or clapping during certain sections. There were no strobes and it was all very tasteful and white spotlights on certain members highlighted their solos. There was no smoke, no effects though images and bright colours showed on the screen, no lasers… no set design, but each member had their own space on the stage and dominated that. Squire had a fan blowing on him perpetually during the show producing a great affect visually, and his dancing was a special effect in itself. The screen film during "Starship Trooper" was very spacey psych images, there was Roger Dean artwork in some places, and waves crashing as well as lightning bolts and a myriad of colours to enhance the music.
.
The crowd were courteous and very reverant towards the music. There were no stupid yelling out during the songs, like “Do Topographic!”, and the only wooping and hollering was heard after each song where it belonged. A few songs received standing ovations and rightfully so. "And You And I" got the crowd to their feet, played so beautifully throughout’ pure genius. The "Fly From Here" epic was played in its entirety and received a massive ovation with the crowd on their feet in applause, and perhaps the largest cheer of the night and spontaneous ovation came after the amazing "Heart of the Sunrise", that featured an unforgettable mid section with Howe and Downes trading off brilliantly.
. 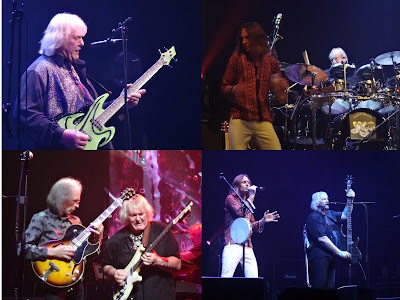 .
Another highlight of the show was Howe’s acoustic interlude performing well known "Clap" and the new one. He bowed graciously at the end and everyone let him know their appreciation. It was also a pleasant experience to hear "Starship Trooper", perhaps my favourite track of the night. They left after that to a standing ovation and said goodnight. The crowd roared for them to come back on and it was deafening in the Palais at that point. The band returned to play "Roundabout". I must say that it was a great way to end the show. Jon thanked the crowd and said we were beautiful Melbourne. He also said previously that they were enjoying their time in Australia. They didn’t speak too much but I remember them saying they would be playing a lot from the new album, and also introducing band members, song titles, or stating you might know this one before playing "Owner of a Lonely Heart".
. 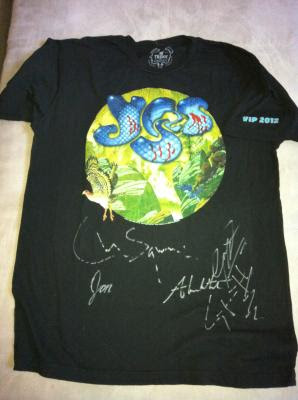 The bass of Squire was turned up to maximum during "Starship Trooper", like a solo, and he danced around. Often Howe played an acoustic attached to a stand and switched guitars easily this way. The roadies kept out of the way mostly though were about to switch guitars and check the keyboards. I even saw Howe adjust his guitar during a solo as I think he believed it was slightly out of tune. They are really consummate professionals and just played virtuoso throughout. There were no drum solos which was surprising as that would have capped off White’s night who really was not as noticeable as other members, though he played well. I never noticed any faltering of Jon’s vocals though I noticed they played some songs slightly slower such as "Owner of a Lonely Heart". This version was the heavy guitar version and had recorded bangs and effects exactly like the original. Howe’s guitar solo was killer and pleased the crowd.
.
It was an memorable show and I certainly loved every minute of it. It was great to meet up with some Progarchive members there and also some Rush fans out the front caught up with me. There were lots of Yes shirts scattered about and some other bands such as Rush, Camel, Pink Floyd, and Utopia. Yes are still amazing after all these years and despite all the line up changes. They are still a force to be reckoned with and can draw a large crowd. Yes live on and I hope they will continue for many years to come.
. 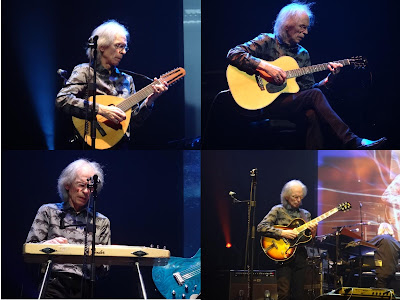 .
One thing I was surprised was the lack of merchandise. There were absolutely no programs! That is a mystery as that would have drawn big dollars. It is the first time I have been to a show with no programs available, The three Yes Tour T-Shirts were $45 a pop, Yes logo on one, 'Fly From Here' album cover on the other with tour dates on the back, and they were snapped up by a massive crowd that had to line up in long queues. The CDs on sale for $25 were the Greatest Hits CD and Fragile Remastered. No 'Fly From Here' would you believe? There was a $15 poster available, but I was disappointed with the small choice. 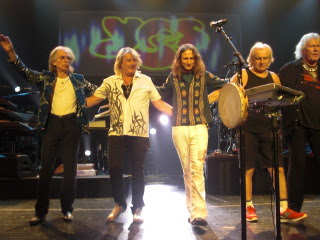 .
It was an unforgettable show and I certainly loved every minute of it. There were lots of Yes shirts scattered about and some other bands such as Rush, Camel, Pink Floyd, and Utopia. Yes are still amazing after all these years and despite all the line up changes. They are still a force to be reckoned with and can draw a large crowd [review by AtomicCrimsonRush]
.
This post consists of a very good audience recording, ripped to mp3 (320kps) and includes custom artwork.
The live concert was recorded by Brother Ruprechkt and sourced from LiborioFriki at musictravellerstwo blogspot. In addition, the concert photos were sourced from TrueBeliever at Yesfans.com with thanks. Finally, I would like to acknowledge the great concert review by AtomicCrimsonRush and am only sorry that I could not attend myself, as the concert was a sellout.
.
Track ListingCD101 - Yours Is No Disgrace (from The Yes Album, 1971)02 - Tempus Fugit (from Drama, 1980)03 - I’ve Seen All Good People (from The Yes Album, 1971)04 - Life On A Film Set (from Fly From Here, 2011)05 - Solitaire (Steve Howe solo)06 - Australia (Steve Howe solo)07 - And You And I (from Close To The Edge, 1972)CD208 - Fly From Here Pt 1-5 (from Fly From Here, 2011)09 - Wonderous Stories (from Going For The One, 1977)10 - Into the Storm (from Fly From Here, 2011)11 - Heart of the Sunrise (from Fragile, 1971)12 - Owner Of A Lonely Heart (from 90125, 1983)13 - Starship Trooper (from The Yes Album, 1971)Encore:14 - Roundabout (from Fragile, 1971)
.
The current line-up is comprised of:
Chris Squire (bassist)
Steve Howe (guitarist)
Alan White (drummer)
Geoff Downes (keyboardist)
Jon Davison (singer)
.
Yes Live At The Palais Link (289Mb) New Link 02/09/2015
.
Posted by AussieRock at 11:27 AM