.
Before things get too serious at Rock On Vinyl, I thought it might be fun to post a song at the end of each month, that could be considered to be either Weird, Obscure, Crazy or just plain Korny.
.
. 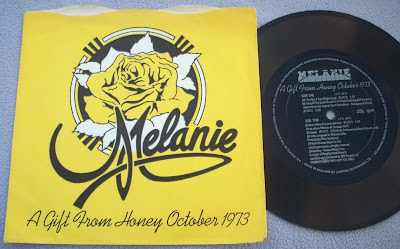 Melanie (Safka) was born on February 3rd 1947 in New York. Her mother was an Italian-born jazz singer. She grew up a shy girl with a great interest for music, so she taught herself how to play the guitar and started to write songs and poetry.
While hoping for an audition for a part in Dark Side Of The Moon, she stumbled into the wrong office. An executive lurking behind a large cigar noticed she was toting a guitar, asked if she could sing...and Melanie went home with a recording contract in her handbag.
The producer of the young Buddah-label Peter Schekeryk got interested in this somewhat dreamy girl when she sang her ideas to him. Together, they recorded her debut-album "Born To Be" in 1968. 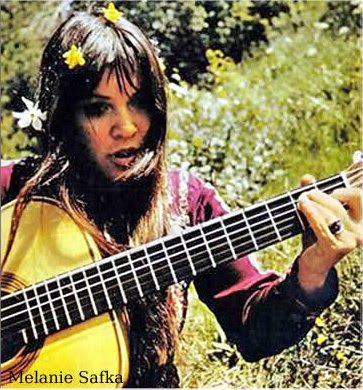 But only after her performance at Woodstock in the pouring rain, Melanie suddenly had a cachet. Her first LP was re-released and she was awarded with a number 6 hit in the USA in June of 1970 with "Lay Down (Candles In The Rain)", performed with the Edwin Hawkins Singers.
Just before her second Top 10 entry, Melanie scored as a songwriter when her composition "What Have They Done To My Song Ma" became a hit for the New Seekers. In October, her haunting version of the Rolling Stones' "Ruby Tuesday" hit number 9 in the British charts.
In 1971, Melanie scored her biggest hit yet: "Brand New Key" was a number one hit in the USA and it remained in the charts for three months. In the UK, the song peaked at number 4 and stayed in the charts for only seven weeks. In 1972, she formed a record label, Neighborhood Records, with her now husband Peter Scherkeryk, releasing LP's which mixed her own compositions with carefully selected compositions from other writers.
Over these years Melanie had grown from being a very special goddess of Flower Power into a mature artist of considerable range and international fame. She produced massive hit singles and two of her eight albums reached sales in excess of a million copies each.
. 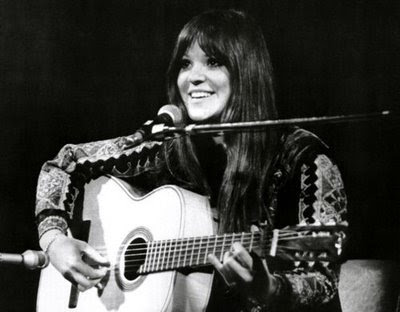 The flexi-disc was often used as a marketing tool to add a little spice to a magazine. The addition of the freebie, or cover mount was used by numerous magazines and papers from poetry, comedy, porn, educational and more commonly, teen’ magazines. At their zenith, dedicated music mag’s like New Musical Express and Sounds were at the fore, culminating in the flexi’ dedicated magazine of the 80’s, Flexipop.
In this case, the popular fashion magazine 'Honey' decided to get on the band wagon with Melanie's recent success and made this Melanie Flexi available in its October 73' edition. Flexi disc eventually died as the new fangled CD took over. CD’s went on to be the new cover mount.
.
Disclaimer: At no stage have I ever bought or even read a 'Honey' magazine - I came across this flexi-disc by accident when I found it tucked away in another album I bought at a garage sale. No....Really.......Awe.....Com'on....
A rather Obscure item indeed.
.
Track ListingSIDE A01 - I am Not a Poet (Nightsong)02 - Song Of The South (Based on the theme from Song Of The North)SIDE B03 - Brand New Key (Recorded live at Carnegie Hall)04 - Seeds
.
.Melanie Flexi Disc Link (24Mb)
.
.
Posted by AussieRock at 6:47 PM