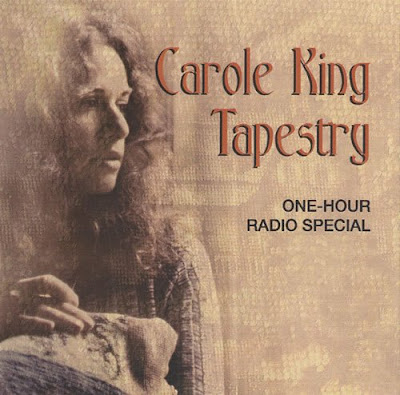 Carole King is an American singer, songwriter, and pianist. While she has been a successful songwriter for decades, her singing career and fame peaked during the first half of the 1970s.
It wasn’t that King had never experienced #1 in her career. By the time 1971 arrived, she had written four #1's, her first being the Shirelles classic “Will You Still Love Me Tomorrow” (co-written with Gerry Goffin).
But as a solo artist the best she could muster was a #22 single in 1962, a tune she’d written for Bobby Vee but recorded herself, “It Might as Well Rain Until September.”
“It’s Too Late/I Feel the Earth Move” changed all that. Released in April 1971, it spent a total of 15 weeks on the chart, including five at #1 starting in June. The album from whence it came, of course, is one of the biggest chart successes of all time, sitting at #1 for 15 weeks and selling over 15,000,000 copies.
Tapestry was Carole King's second solo album and is 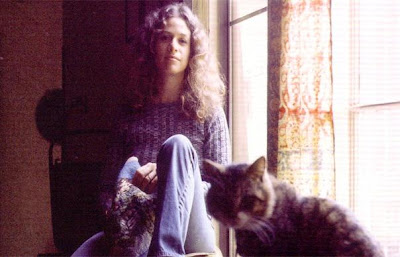 a landmark singer-songwriter album. It also marked a move into hit songs that discussed very adult aspects of relationships in the early 1970s.
"It's Too Late" was the first single from the album and went to #1. It also received a Grammy Award for Record of the Year while the album won for Album of the Year.
.
Tapestry has gone on to be one of the biggest selling albums of all time spending 15 weeks at #1 and over 300 weeks on the album chart in general.
The picture used for the cover of Tapestry (see above), according to photographer Jim McCrary who captured King, was taken at a Laurel Canyon house where King lived on Wonderland Ave, and not her house at 8815 Appian Way in Laurel Canyon, California. It shows her sitting near old Indian print curtains and holding a tapestry she hand stitched herself. Also in the picture is her cat Telemachus.
. 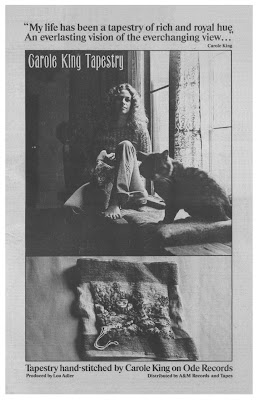 This one hour radio special tells the story of Carole King's classic album, Tapestry through its classic songs and insightful interview clips by Carole King, producer Lou Adler, her very close friend Graham Nash (from CSN&Y) and journalist David Wild of Rolling Stone.
Their comments touch on nearly every aspect of the album's production, it's impact on the music industry, Carole King's song writing process, and how her career developed from the Brill Building to Tapestry and beyond. Besides the album tracks, there are also bonus live performances, also featured on her recent 2-CD Legacy Edition of Tapestry released in 2008.
Carole King's music remains an essential part of America's pop consciousness. In 1993 the off-Broadway revue Tapestry: The Music of Carole King evoked the songwriter's biggest hits. A tribute album, 1995's Tapestry Revisited, featured singers such as Celine Dion, Faith Hill, Rod Stewart, and Richard Marx performing songs from King's enduring 1971 record..
This post consists of mp3's (320kps) ripped from my copy of an official 2008 US Sony BMG label 2-track promotional only CD-R acetate and includes full artwork with its custom picture sleeve and cues/details on the back cover. The quality of the recording is excellent and the dialogue /music content is engaging from start to finish. After listening to this radio special, you will be dusting off your trusty copy of Tapestry and giving it a few more spins on your turntable - guaranteed.
.
Carole King Link (119Mb)   New Link 28/03/2020
.
Posted by AussieRock at 9:58 PM