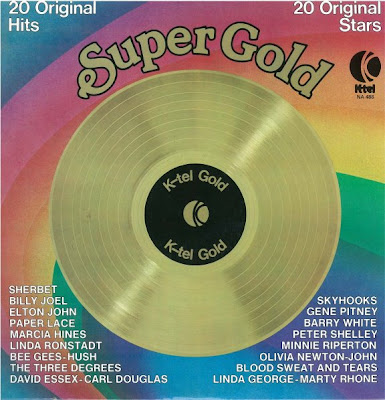 Although '70s Nostalgia has lately been wrung dry of its charm, there are several artifacts from the era that still wield a certain fascination. For any record collector rummaging through a cardboard box of albums at the thrift store, one such relic is the K-Tel Records LP. With its unholy union of hyperbolic album-cover art and AM radio pop hits, K-Tel was an icon of schlock for an entire generation growing up in the '70s and '80s. K-Tel's compilation records of hot hits were very popular at the time, though no self-respecting Led Zeppelin fan would have ever admitted to owning one. Today, an encounter with a K-Tel album inspires one to pause and to wonder: Did we really buy them? And why? Most record collectors would typically flip right past it and move on to the assorted AC/DC LPs.
I for one tended to avoid them as the quality of the pressings were not great, mainly due the length of the material (20 tracks in total with 30mins of music on each side) making them sound somewhat tinny (no bass) and longer tracks were usually shortened.
The K-Tel website features a large gallery of cover art and a newsletter devoted to K-Tel stories, all wrapped up in an appropriately K-Tel-like design.
.
K-Tel Records was founded in the early 1960s by Winnipeg, 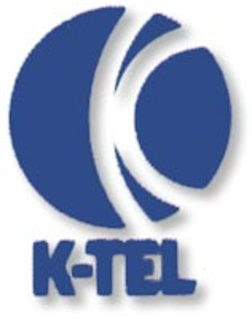 Manitoba’s own Philip Kives, who had been successful at selling non-stick fry pans in Atlantic City and in Australia. When he came back to Canada he decided to try his hand at selling record albums. By 1966 K-Tel was releasing dozens of various-artists albums with everything from country to polka to rock. While his idea to squeeze 20 (or more) songs by 20 (or more) artists on one 12" album was not new, he took the concept a couple of steps further–he sold them cheap and he sold them on television.
K-Tel was famous for its TV ads. Back in the 70's you just didn’t hear popular music used when it came to pitching a product on television, so when his commercials would come on you were instantly aware that it wasn’t your typical pitch for a cold medicine or a TV dinner. They would also instantly start off very hard sell. The announcer would catch your ear immediately with an enthusiastic "20 Original Hits, 20 Original Stars," and then you would be reeled in instantly. It was clever.
.
So why have I collected some of these K-tel releases? To be honest they are cheap and plentiful, and that’s a lethal combination when you collect anything. You can go into any Opp Shop or Garage Sale and find a box full of them for $1.
So are these records becoming more collectible and are any particular titles worth more than others? Well, it’s funny–serious record collectors will tell you that K-Tel records are 2nd rate when vinyl collecting. I mean, audiophile purists will tell you that the quality sucks or the songs are too condensed and they aren’t worth dropping a needle on them, and that’s fine. However, in spite of all of that, I’ve seen a K-Tel album sell for $100 on eBay, so I guess it's all a matter of what you want to have in your life. There’s instant nostalgia with K-Tel and I’m finding that those who collect them are mostly 50-something baby boomers, just like me. 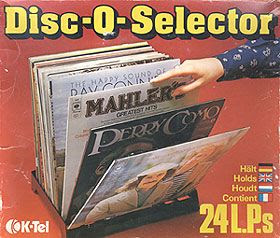 There have been some great K-Tel compilations, but one of my favourites is this release from 1975 - 'Super Gold'. All tracks on this 20 Original Hits album are just that - hits that we 'Baby Boomers' all remember and grew up with while we were battling through our teenage years.
One other product that K-tel is best known for was their Record Selector. This device allowed you to flick through your albums automatically. TV ads showed LPs mysteriously sorting themselves. "Runs fast OR slow! Stops automatically! Finger Touch Starting!"
As always the reality was more mundane: a black plastic rack, a set of grippers and a half a dozen rubber feet for the base. Setting it up was easy. Albums were wedged into the grippers, linked by catches. Pull the front album towards you, the catch brought the next forward, until all twenty four albums had whizzed by. Once the palpitations had died down you could master advanced features. Like stopping it in mid-flow and removing an album to play. And, er, that's it. Returning the album you'd chosen was even more exciting. Set the Selector in motion, and it stopped - automatically - at the empty place. They even likened the device to a computer ! God help them if Microsoft had marketed them instead......LOL
.


.
So, sit back, relax, and enjoy this great selection of songs from the early 70's and reminisce the days when the airwaves were prolific with Super Gold Hits.
The rip was taken from my 'near virgin' vinyl (320kps) and includes full album artwork and the Youtube clip for the K-Tel Record Selector, as shown above. (Some information above was sourced from popcultmag.com with thanks)
.
Track Listing01 - The Night Chicago Died (Paper Lace)02 - Life (Sherbet)03 - From The Inside (Marcia Hines)04 - Piano Man (Billy Joel)05 - Daniel (Elton John) 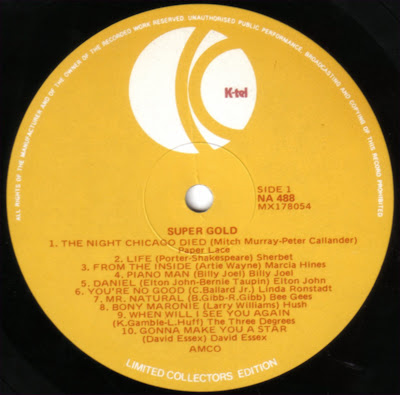