(Australian 1986-1988)
.
Before things get too serious here at Rock On Vinyl, I thought it might be fun to post a song at the end of each month, that could be categorized as being either Weird, Obscure, Crazy or just plain Korny.
. 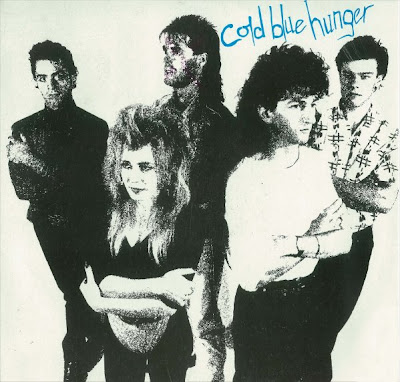 There's not much information available about this Obscure Melbourne band from the late 80's.
Cold Blue Hunger evolved out of the bands 'Particular Motion' & 'The Plastoids' which were heavily based on Synthesizers but as 'Cold Blue Hunger' they had a tougher edge without losing its modern 80's sound. They were a Melbourne band playing the pub circuit during the later part of the 80's but never really made the big time. They played at such venues as the Corner Hotel in Richmond, the Tankerville Arms Hotel in Fitzroy and the Prince of Wales Hotel St. Kilda.
While playing under the name of the Plastoids, they released an independent single called "Blue Cold Hunger", and was probably the inspiration for their name change. As Cold Blue Hunger, they released a single in 1987 entitled "Wasted Time" and a selftitled 4 track 12" 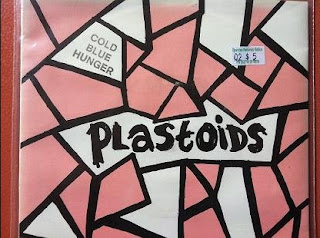 E.P in 1988, as featured in this post.
The 'Who's Who of Australian Rock' cites this independently released E.P as being called "Finland Friends" but was probably derived from the first track on the E.P of the same name. It was recorded at the Sing Sing Recording Studios in Melbourne.
Band member details are also vague, as both the E.P and Who's Who Of Aust Rock only cite them by their first names: Paula (Vocals, Keyboards), Mal (Bass), T.C (Guitar, Vocals), Rocky (Drums), Nick (Guitar)
If I was forced to compare them with another band I would probably say 'Big Pig' or 'The Eurogliders', but in my opinion they didn't really have that 'X factor' which bands need to break into the charts.
Anyhow, if you are curious about this band, as I was, when I came across the E.P at my local trash & treasure, or you simply have a 'cold blue hunger' to hear another WOCK posting, why not download this post and have a listen.
The post contains mp3's ripped from vinyl at 320kps and includes full artwork and label scans
.
Track listing 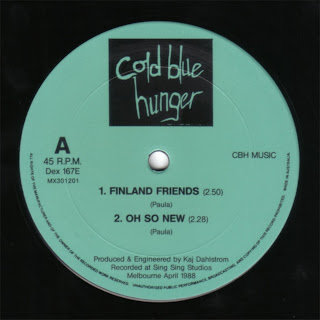