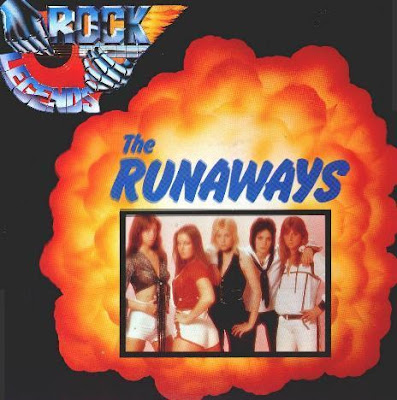 For those of you who do not know, The Runaways were an American girl group who released their first album in 1976. They were all aged about 16. The band came together in '75 in L.A. (of course) under the watchful eye of veteran rock hypester/houdini Kim Fowley, who has garnered himself a reputation (and rightfully so) of being truly crazed, fashioned a group containing young girls, all sixteen and seventeen. The girls, on command, played raunchy, overtly sexual music. In short, it was jailbait with a back-beat. The little boys (and the big boys, for that matter) went wild as the leather-encased, open-shirted batch of girls-next-door hit the road. Seeing the Runaways on stage, wielding their instruments like St. Valentine's Day assassins, was truly stirring, in a variety of ways.
Now, legend has i 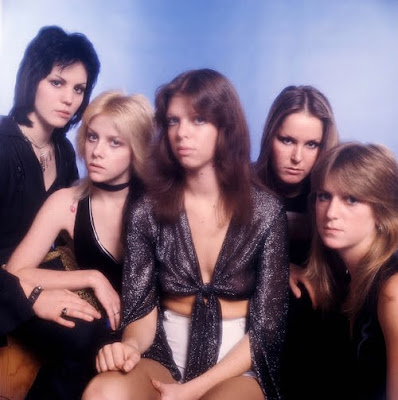 t the members were recruited in the car park of an L.A. glam rock disco's car park. I'd like to imagine this is true, that the girls were found sitting on car bonnets, drinking underage, and popping pills. The fact that The Runaways were a 'manufactured' group doesn't bother me that much. Some great groups - Public Enemy, The Supremes, Sex Pistols, Spice Girls - were put together this way. All that matters to me is the end result. And to me, both then and now, The Runaways are as authentic and valid as I need.
If you haven't heard them, The Runaways records sort of mixed a Suzy Quatroesque Glam thump with a pre-punk, almost Ramones type minimalism. The songs were snotty, bratty, and full of bravado, underlined with the vulnerability of being an adolescent. Key words in the song titles and lyrics were 'night', 'streets', 'wild', 'bomb', 'fire', 'wasted', and 'neon angels on the road to ruin'.
They were a profound mixture of hype and 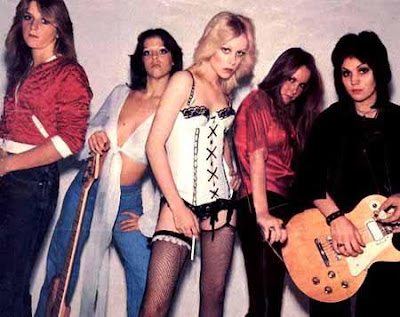 mascara, and were the first batch of girl rock and rollers really to capture the attention of the world at large. (Earlier, Fanny nearly made it, Isis didn't even come close, and Birtha bombed big). From the start, the music industry knew that if these kids made it, they'd make it big, with such show-stopping numbers as "Born to Be Bad", "I Love Playin' with Fire", "Cherry Bomb", and "You Drive Me Wild".
But, by the time their second album, 'Queens of Noise' was released, the girls were badmouthing Fowley and Fowley was responding in kind, each accused the other of having a profound lack of talent. However, a short separation proved that each needed the other and, as the group began to change members. Fowley finally returned to the fold, however, the damage was already done, and after making a couple of albums, The Runaways decided to play their last concert on New Year's Eve 1978, at the Cow Palace near San Francisco and officially broke up in April 1979.
.
Life After The Runaways 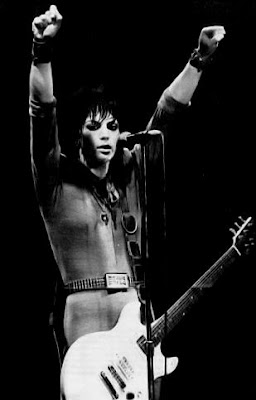 Cherie Currie, the singer, went off to become a solo star and actress. I did see one film she did, 'Little Foxes'. In it she basically played herself, a no good, too fast to live pill popping wild girl who was born to lose. The film was pretty crappy. In real life, she did become a junkie, and after many years she kicked the habit, and now works as a drug counselor. Cherie wrote her biography a few years ago, and I have spent much time trying to track it down, to no avail.
The guitarist, Lita Ford, worked for years as a beautician, before launching herself as a sleek, cat-suited, heavy metal goddess. Her records were rubbish. She also married some tattooed Neanderthal from heavy metal grizzles W.A.S.P, and then I don't know what happened to her.
Joan Jett went on to be Joan Jett, Queen of Rock'n'Roll. I believe Joan to be (now bear with me on this one), in her purity and minimalism, as true an artist as John Cage or Yoko Ono, and in her tomboy leathers, to be as queer as Dennis Cooper or Kathy Acker. Her dedication to loud guitar music, hand claps and screaming choruses is so great, I think that if you were to cut Joan Jett in half, the words 'I love rock and roll' would run through her like a stick of seaside rock.
When people write about the birth of punk, they always talk about the same old stuff: The Velvets, The Stooges, The Dolls, etc. Well, for my money, The Runaways were just as radical, just as nihilistic, and just as suburbanly trashy [extracts taken from Lillian Roxon's Rock Encyclopedia, Angus & Robinson 1978, p435-436]
.
I feel The Runaways should be remembered as the greatest 'chic band' of the century - but then again, I'm a male and I'm biased
. 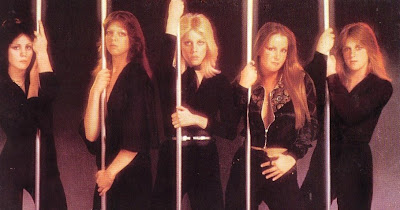 .
.This post consists of a rip (320kps) taken from my cassette tape version of this Rock Legends 'best of' compilation. Although the tape has been played relentlessly at many a party, it still plays true and the sound quality is still excellent. I have been able to source the artwork for the LP release, however, I suspect this compilation was never been released on CD. Select photos the band have also been included for your drooling !
.
Track Listing
01. Cherry Bomb
02. You Drive Me Wild 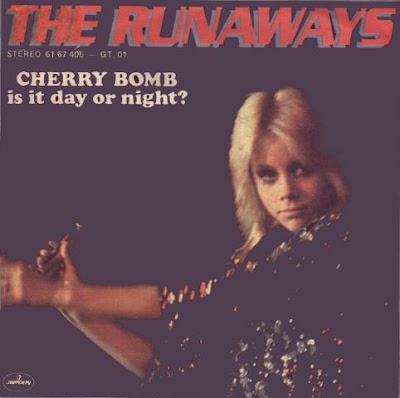