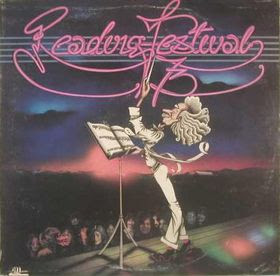 The Reading Festival originates from an annual Jazz and Blues festival organised by the National Jazz Federation and London's Marquee Club. The inspiration came from the Newport Jazz Festival of 1950s America. The first National Jazz Festival took place at Richmond Athletic Ground in August 1961 when the main attractions included traditional Jazz musicians such as the Tubby Hayes, Johnny Dankworth and Tony Russell.
By 1965 the popularity of traditional Jazz had waned, overtaken by Rhythm and Blues performers such as the Who, the Rolling Stones and Rod Stewart. Subsequently the festival became known as the National Jazz and Blues Festival. Noise complaints forced the 1966 festival to move to Windsor Racecourse, then in 1968 to Kempton Park and then, in 1969, to P 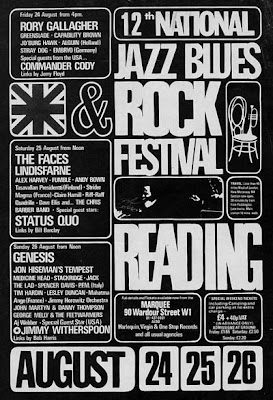 lumpton. The festival finally reached Reading in 1971. Reading Council granted permission to the promoter, Harold Pendleton, to hold the festival by the Thames as part of the town's Festival of Arts.
Between 1971 and the mid 1980s the festival built a reputation for booking the biggest names in the business, as well as showcasing the talents of new bands from around the globe. The late 80s and early 90s were to see changes in the contemporary music scene with indie sounds and dance cross-over acts coming to the fore. In 1988 the Mean Fiddler, who had championed such acts in venues across London, were given the task of booking the festival bands. The following year they were asked to organise the whole event and, after the legendary festivals of the early 90s, the future of the festival was assured (extract from readingmuseum)
.
Although the Reading Festival has been going, on and off, since the early '60s, I only know of two years where albums of the event were released, 1973 and 1982. 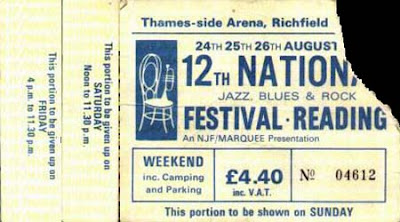 The '73 LP, Reading Festival 1973, was released by GM (Gaff/Masters) Records, the recording imprint of Rod Stewart's management company, Gaff Management, so it should come as absolutely no surprise to find that almost all (all?) of the eight artists represented had a clear GM connection in one form or another, with several cases of inter-band co-operation, too. Fair enough - it's their album... Despite containing an artistically pretty mixed bag, the album's chiefly of interest these days for its otherwise unavailable live tracks, although, surprisingly, it not only had a vinyl reissue in 1990, but has also made it onto CD via those nice See for Miles people (extract from planetmellotron.com)
.
I remember picking up my copy of Reading Festival 73 from Brash Suttons, Geelong back in the mid 70's when they were having a huge sale. This album was one of many titles being given away for the pricely sum of $1.99 and I'm pretty sure the normal price for a record was around $7.00 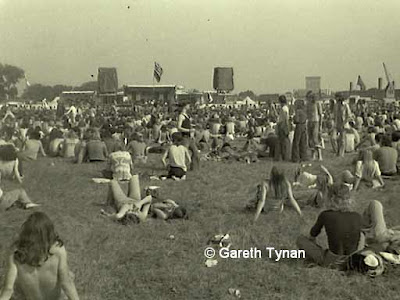 What caught my attention was the inclusion of tracks from some well known artists: Roy Gallagher, Status Quo and The Faces. However, I wasn't all that familar with the other artists although one of these - Greenslade was a band that I'd always wanted to pursue.
Needless to say, I was happy with my purchase at the time and I still put this album on my turntable every now and then.
This album was also released on the Tiger Lily label as "Reading Festival Featuring Rod Stewart", and is a unique release ... it's certainly obscure. I've only seen two copies in 40 years of collecting so good luck locating another copy.
As you probably guessed, the other album title wasn't particularly accurate. Yeah, the performances were taped at the Reading Festival (officially The 13th National Jazz, Blues & Rock Festival, Reading, England held over three days in June 1973), but in spite of the title, Rod Stewart (and the Faces) were hardly the dominant act on this eight selection compilation. In fact they were only featured on one lackluster track - turns out Stewart and the Faces who were in the midst of going their separate ways also got pretty bad reviews at the concert itself. So what's actually on the album?
. 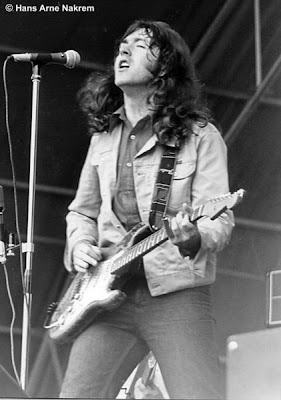 - The late Rory Gallagher started the set off with a blazing "Hands Off". Fantastic live version that kicked the crap out of the original studio version (found on 1972's 'Blueprint').
- There's a Bo Diddley "Road Runner" cover by the band Strider. Not a half bad heavy metal cover version I must say.
- Greenslade's was not exactly a known quantity in Australia in the 70's, but "Feathered Friends" was a surprisingly enjoyable piece of progressive puff. I've certainly pursued their albums since hearing this track from Readings.
- Pulled from their 'Piledriver' album, "Don't Waste My Time" was a standard Status Quo rocker. Mindless fun ...but still 12-bar blues at it's best.
- The Faces were probably the band most folks came to see, but based on their pro-forma cover of "Losing You" you had to wonder what the excitement was about. A lackluster Stewart vocal and seemingly endless Kenny Jones drum solo didn't exactly help.
- Perhaps the biggest surprise to me was Alan Bowan's "Long Legged Linda". Yeah, he didn't have the most impressive voice you've ever heard, but the song was a great slice of pub rock energy. One of the standout performances ...
Note: The album covers incorrectly credits his name as Andy Brown (not Bowan) which is pretty poor. 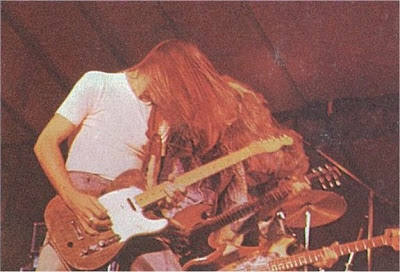 - Easily the weirdest artist and song in the lineup was Leslie Duncan's "Earth Mother" ... Mind you I have nothing against Duncan, but her pop moves sure sounded out of place here. Mind you her performance was actually quite good. Nice guitar work ...
- That left Tim Hardin as the other big surprise. Hardin managed to turn in a pair of stunning performances on "Hang On To a Dream" and "Person To Person". (He sure didn't rock out like this on the studio albums I've heard.)
The album also sported some great sound quality courtesy of Ronnie Lane's Mobile Studio and producers Chris Beckwith and Jimmy Horowitz. In fact some if the performances were so good you had to wonder whether they were spiffed up with some post-production work (check out the strings on Duncan and Hardin's performances).
Shame the set didn't capture some of the other festival performances since the 1973 line up was pretty electric including opening act Embryo, Commander Cody and His Lost Planet Airmen, Genesis and Spencer Davis.
.
First Hand Concert Reviews
(taken from ukrockfestivals.com) 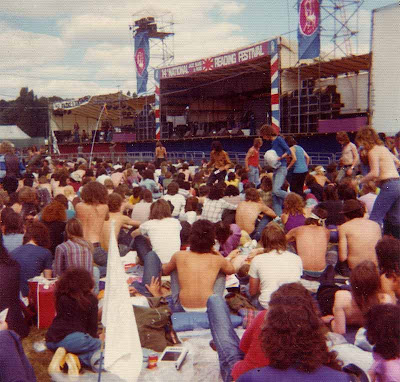 Here's my recollection of the Reading Festival in 1973.. yes it was held over a bank holiday, and yes, too, by the time the festival was in full swing it was clearly evident that the hippie dream was well and truly done and dusted. Hawkwind never did play - wish they had. Commander Cody (reason I went) did well in a high profile but ultimately unsuccessful bid to break through to UK acceptance.They did a killer version of "smoke smoke smoke (that cigarette)."
Genesis and Rod Stewart were the big draws of the time, and I remember pissing myself with laughter when, after a suitably portentous two hour wait while the great Genesis got their stage set ready, on came Peter Gabriel in this ridiculous pyramid with eyes doing Watcher of the Skies.
No, not my kind of spectacle.
There was some ugly violence, led by this huge ginger haired guy in the crowd, I think during Rory "man of the people" Gallagher, whose power was briefly cut midway during a song.Of course he went on playing. And I remember another incident, sign of the times, when some gentle long haired guy got up to sway naked in the crowd only to be the recipient of bottle after bottle. (this would probably have been Jesus)
I remember John Martyn, and a whole host of now vanished wannabes. Alex Harvey went down a storm. But when Rod Ste 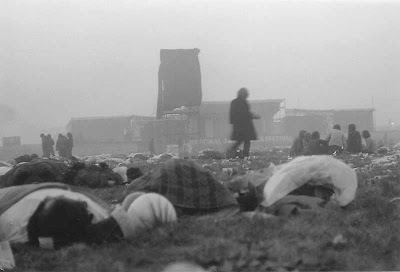 wart appeared with The Faces there seemed to appear from nowhere this crowd of hooligans waving football scarves, crowding in front of the stage like an army. "Am I losing you?" I remember Rod asking.
Weather was fine, the whole place fenced, regulated, homogenised, and I remember John Peel playing with breathless wonder the just released stones single "Angie". I went with a friend who was paranoid about being caught smoking substances in public. When I lit up, he scuttled like a crab about twenty feet forward.
Oh, another thing, in a bizarre way I think the first band on, a now forgotten German group (Embryo) were by far and away the best there! They announced in heavy Germanic tones "Ve haf just come bak from living in Morocco" and played what I guess would sound very much like world music nowadays. They were met by silence and me, noisily clapping.
(recollection by Nick Black)
. 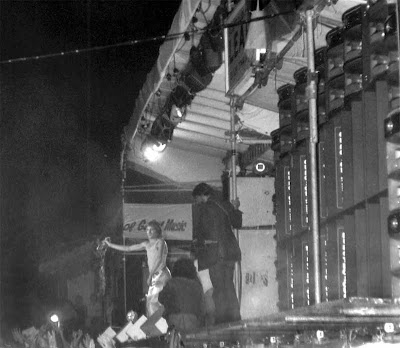 Not all the programming of this efficiently organized festival may have been imaginative, but at least the top-of-the bill acts over the three days provided a vivid contrast, and if competition is partly what these events are about, then it must be said that Rory Gallagher excelled. He is a musician from Cork basing his music on the Blues, an anachronism, perhaps, but his sheer, honest energy rings through. Only he of the three bill-toppers risked doing anything new, when he played four numbers from his next album to be released in October. Of these " Sleep on a Clothes Line", " Million Miles Away" and "Who's That Coming" are well up to the standard he demands. His guitar-playing is unmistakable, which is more than can be said for most these days, and his musical integrity unchallenged. Loathing personal aggrandisement, he is the total anti-star, and as such a genuine hero of the people. In contrast, Saturday night's appearance of Rod Stewa 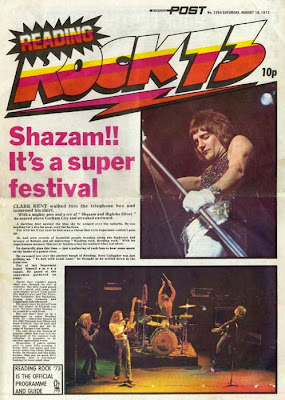 rt and The Faces was a disappointment. They worked hard, but one wonders how long this group that has obviously lost its impetus can continue. Despite this, Rod Stewart still stands out as a personality, and surely must now make his own way in Rock.
Sunday night brought another glimpse of Genesis, a group who use theatrical effects as well as thoughtful electronic music in the style of groups like Pink Floyd. To say this is a tribute. They, too, are about to launch a new album, but played safe by rendering what we have heard before. "The Musical Box". " Supper's Ready" and " The Return of the Giant Hogweed" pleased both myself and the 25,000 audience, and was an effective climax to three days of sunshine and friendliness. Festivals always produce at least one surprise success and this year it was portly George Melly, musically from another era. The youthful audience immediately accepted his trad-jazz-flavoured tunes like " Frankie and Johnny" and his zany, uninhibited approach. Undoubtedly a new cult figure has arrived.
(recollection by Michael Wale)
.
The post consists of a 320kps rip of my 'pristine' vinyl copy and includes full album artwork. Select photos from the festival are included, with thanks to Vin Miles, Steve Austin and Gareth Tynan who took them.
.
Track Listing 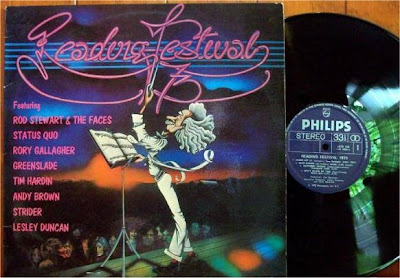