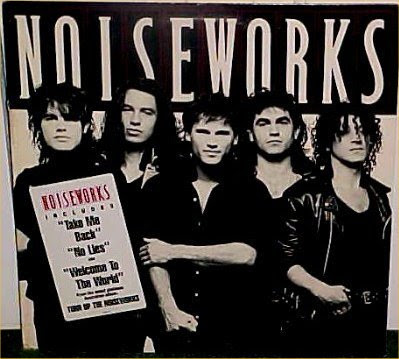 Noiseworks are an Australian rock band that formed in Sydney in 1985. They built up a strong following on the Australian pub-rock circuit, and in 1987 were signed by CBS. Their self-titled debut album was released in July 1987 and peaked at number 2 on the Australian Albums chart.
Considered to be one of Australia's more successful rock bands of the late 1980s, their self-titled debut had a series of successful singles, such as "No Lies," "Take Me Back," and "Welcome to the World." The album went on to sell more than 200,000 copies in Australia.
The band's second album, 1988's Touch, proved to be another big hit, reaching number 4 on the Album Charts. The hit singles included "Touch," "Voice Of Reason" and "In My Youth".
.
By the end of 1989, the band had commenced 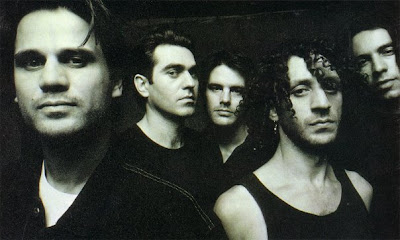 work on its third album. They were now signed to Sony, and when the album was presented to them, they rejected it. The album was reworked and finally made an appearance in July 1991 as "Love Verses Money". This album debuted at Number 1 on the Album Charts and the single "Hot Chilli Woman" became the band's biggest hit, reaching number 7 on the Singles Chart. In all, 5 singles came from this album.
At the start of 1992, Jon Stevens, joined the Australian cast of the revived stage musical "Jesus Christ Superstar" in the role of Judas. Jon appeared alongside the rest of the cast on a CD and single from the show. The show ran for 84 nights and was performed across Australia to more than a million people, making Jon a household name. 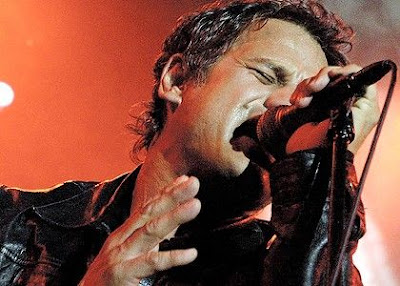 This stint with the show basically put an end to Noiseworks. The band played its last gig at Selinas in Sydney during March 1992. That gig produced the band's final single, a cover of the Beatles "Let It Be" (Live). This song appeared on the Greatest Hits CD released in October 1992.
Noiseworks disbanded in early 1992, shortly after the release of their third album.
Stevens has forged a somewhat unsuccessful solo career since Noiseworks with the albums "Are U Satisfied" , "Circle" , "Ain't No Life For The Faint Hearted" and "The Works." Jon had a brief stint as lead singer of INXS, but left after becoming frustrated with the band's lack of progress in generating new material. Steve Balbi and Justin Stanley formed The Electric Hippies in 1994 and had moderate success with the song "Greedy People".
.

.
Jon Stevens and Noiseworks reformed in September 2007 for a national tour with the Choirboys and Steve Balbi's project Move Trees. In December 2007, Jon announced that Noiseworks planned to return to the studio in 2008 to record their first album together in sixteen years [extract from sergent .com]
.
After a short break, Jon hit the road again in 2008 to join Ian 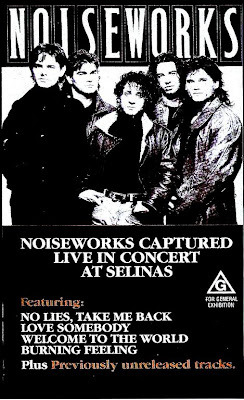 Moss (Cold Chisel), Jack Jones (Southern Sons) and Tania Doko (Bachelor Girl) on the Let's Get Together national tour. After performing a number of shows in the UK, including an Australia Day event in London, Jon joined Noiseworks once again for a national tour. They released their first official live album, 'Live N Loud', recorded at The Palms (Melbourne, Australia) in October the year before.
.
2009 began steadily, with Jon hitting the road yet again to perform his more intimate shows and the commencement of work on new material at Rockinghorse Studios (Byron Bay). He and friend Stuart Fraser appeared as surprise guests on an episode of Domestic Blitz., singing an acoustic version of "Touch" for a deserving family. But a heart condition that he had been alerted to in December 2008 (when he had two stents inserted into his arteries) gave him a scare that no-one wishes to receive. Reflecting on his own ordeal, he leapt at the opportunity to become an ambassador for the Hugs For Hearts campaign and several other initiatives relating to his experience, and from there he eased himself back into touring. 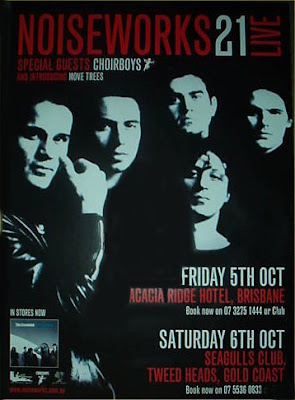 Jon Stevens continues to go from strength to strength and fans eagerly await his first studio album in five years. He will bring a new touring line-up comprised of Adam Ventoura, Johnny Salerno and Danny Spencer. Another Noiseworks tour is also on the horizon, as well as more concert dates with John Waters.
Through his passion and tenacity, Jon has established himself as one of Australia‟s finest performers, and one only needs to listen to a record or see him in his element his live shows to realize what has made Jon a spirited and gifted musical talent.
.
This post contains a rip taken from CD (no longer available) at 320kps and includes full album artwork. I have also included three bonus B-Side tracks taken from the 3 singles released from this album, two tracks having been recorded live at Selinas Nightclub in Sydney in 1987.
This album was a huge hit when it first came out and established Noiseworks as another powerhouse band to come out of the land of Oz.
.
Track Listing 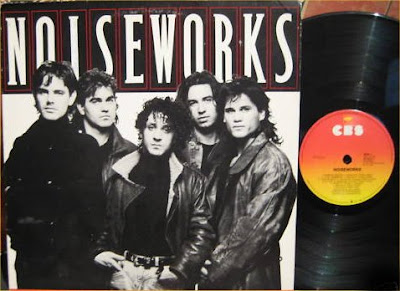