Before things get too serious here at Rock On Vinyl, I thought it might be fun to post a song at the end of each month, that could be categorized as being either Weird, Obscure, Crazy or just plain Korny.
.
. 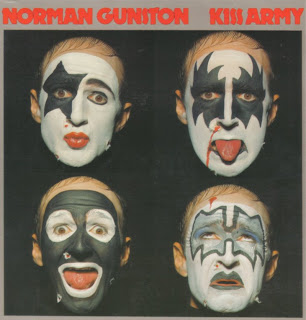 Norman Gunston (the Little Aussie Bleeder) was originally conceived by comedy writer Wendy Skelcher and first appeared as a minor character in the second series of the cult Australian TV comedy series of “The Aunty Jack Show” (see previous post)
His single record releases sold sufficiently well enough to enter the Australian top 40 charts and his parody tributes included punk rock Sherbet, Abba & Kiss to name a few.
Gunston released his 'Kiss Army' single in 1980 around the time of KISS' long awaited Antipodean visit. He nearly ended up in serious trouble for using KISS' music from "I Was Made For Lovin' You" on this parody track, but things worked out well and he ended up being involved in the Inner Sanctum documentary. 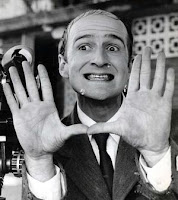 This track is just typically crass and trashy Norman at his best, silly and innocent, with that horribly whiny and exaggerated Wollongong drawl: To-noit... I'll be stickin' out my tongue... (etc, etc) I am marching in the Kiss Army... A nice little takeoff of the Kiss Fever of 1980 - just look at the cover.
The B-side, "Normdrum," is a pretty funny take off of Molly Meldrum's "Humdrum" segment from Countdown.
Gunston also appeared at the Sydney press conference asking a number of questions (some confusing ... some controversial ... but KISS still gave as good as they got!).
Kiss wanted to sue for breach of copyright at first since this single's music is pretty much a direct rip off of "I Was Made For Loving You" with different words. Then things seemed to just settle down after Kiss had some revenge at the press conference. The band humiliated poor sheepish Norman, Ace Frehley even dared Norman to become part of their stage show - "I could bounce my laser beams off your head" - and Norman just returned one of those pricelessly uncomfortable side-to-side Gunston shifts of naive embarrassment.
On the left is a (wrinkled) photo taken at this press conference (thanks to Archivist).
In Gunston's hand is a stamp and pad so he could quickly give KISS his autograph!!!
.
Gunston says: "Let's face it...it was a pretty smart move...you guys touring Australia just as I had my record out!"
.
The following is a newspaper article which talks about controversy surrounding the release of Gunston's Kiss Army single and video clip. 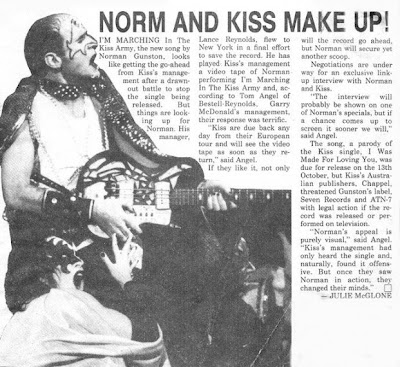 .....................(Newspaper Article Sourced From The Archivist)
So, its not too hard to see why I chose this 'bizzare song' for this month's WOCK on Vinyl post, as it pretty much covers all of the criteria: Weird, Obscure and Crazy. So I guess that just leaves K for Kiss !


This post includes a 320kps rip of my single (Side A & B) along with scans of the cover and record labels. A scan of the newspaper article shown above and a collection of relevant photos are also included (Thanks to the Kiss Archivist for these). To see a high resolution video clip of Gunston's appearance on Countdown (1980) performing his Kiss Army single,go to the Countdown website.