Before things get too serious here at Rock On Vinyl, I thought it might be fun to post a song at the end of each month, that could be categorized as being either Weird, Obscure, Crazy or just plain Korny.
. 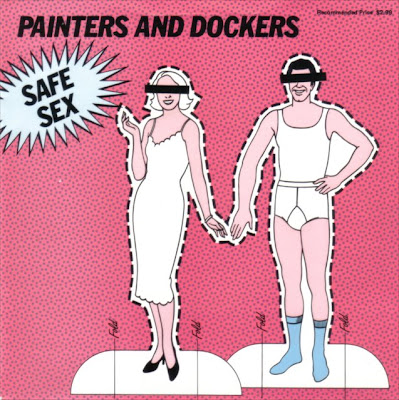 I think I'd better explain why I chose to post this single before you get any weird ideas. I've been busy painting the house recently - in fact, I've just finished painting the study where I do most of my blogging. So when it came to deciding what to post for this month's WOCK on Vinyl, the word 'paint' was somewhat engrained in my brain - or maybe it was the paint fumes !
I then remembered a bizarre single I found in a bargain bin some 20 years ago, by a local Melbourne band called the 'Painters and Dockers' with a Crazy title "Safe Sex" which has some very Korny lyrics. The record cover is also designed with some cut out characters, an idea similar to that which Kellogs adopted in the 70's, on the back of their cereal boxes.
.
Painters and Dockers are a band from Melbourne, Australia who formed in 1982 . The unusual name was chosen early in the band's career when playing at a pub frequented by the 'Federated Ship Painters and Dockers Union', the band had no name and chose Painters and Dockers for the event, and the name stayed with the band from then on. Several members of the band went on to form the highly successful Dili Allstars.
The Painters and Dockers released six albums 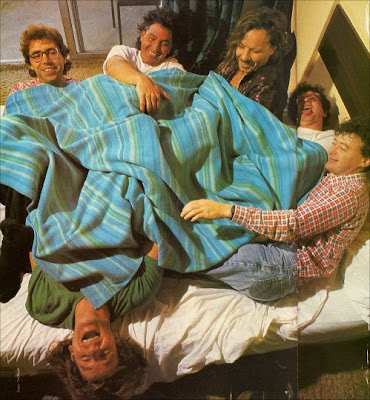 between 1984 and 1994, which featured a selection of sarcastic and amusing singles, such as "Die Yuppie Die" and "Safe Sex" from their 1988 'Kiss My Art' album and the pro-queer and anti-monarchy "I Know Better Queens Than That" from 1994's 'The Things That Matter'.
On closer inspection of the record label, I have discovered that "Safe Sex" was produced by the legendary 'Lobby Loyde', and his almost punk rock influences can be clearly heard in this track and the live B-Side "Soul Child".
Their greatest chart success was achieved with 1985's Nude School which received air play on a number of commercial radio stations and which was marked by its controversial lyrics and video clip.
In the earlier years, they were the headline act at the Port Melbourne Festival, and in a Government initiative called Rockin' The Rails, played songs from the back of a train, as it stopped at various Melbourne stations, including Ringwood, Camberwell and Flinders St.
.
The rip was taken from my vinyl 45 at 320kps and includes full artwork.
Oh well, it's back off to do some more painting - now where did I put that damn paint brush ?