The Rolling Stones are an English band whose rhythm and blues and rock & roll- based music became popular during the "British Invasion" in the early 1960s. The band was formed in London in 1962 by original leader Brian Jones, but was eventually led by the songwriting partnership of singer Mick Jagger and guitarist Keith Richards. Pianist Ian Stewart, drummer Charlie Watts and bassist Bill Wyman completed the early lineup. Ian Stewart was removed from the official lineup in 1963 but continued to work with the band as road manager and keyboardist until his death in 1985. The band's early albums were mainly covers of American blues and R&B songs. The band's single, "(I Can't Get No) Satisfaction", established the Stones as a premier rock and roll act [extract from wikipedia]
.
The Stones' second Australasian tour (1966) was even bigger than their first. They had just returned to work after what had been their longest break since the band's formation in 1962. Their popularity had soared since their previous tour, and by the time they arrived Decca had released 13 singles, six EPs and four LPs in Australia. On the first tour, promoter Harry Miller had been extremely stingy with the band's freight allowance and had insisted that they not bring their own amplifiers to cut down costs. This time around the band were in a far stronger negotiating position and they brought 72 pieces of luggage and 102 pieces of equipment. 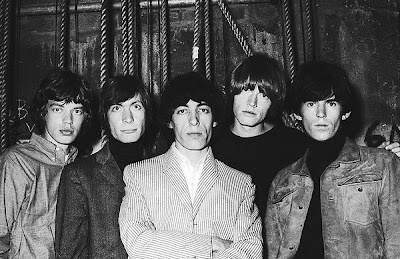 The tour was another double bill, this time supported by The Searchers -- the bill was later described by Searcher Frank Allen as "a combination as weird as teaming Vlad The Impaler with Mother Theresa".
The '66 Far East tour came hot on the heels of the Stones' latest single, 19th Nervous Breakdown, released on 4 February in the UK. It was another transatlantic smash, gaining rave reviews and reaching #2 in both the UK and the USA. On 11 February the band left the UK and travelled to New York, where they promoted the new single with an appearance on The Ed Sullivan Show. They performed Satisfaction and 19th Nervous Breakdown, followed by a duo performance of As Tears Go By with Mick and Keith. This was also the Stones' first colour broadcast on US television.
The tour was relatively uneventful, although Brian caused a minor stir by using the word 'Christ' during a radio interview. The doorman at the Wellington Dominion Theatre was quoted about damage to the theatre there:
"When The Beatles were here seats were damaged. This was worse than The Beatles -- several seats were pierced by stiletto heels."
At the Sydney press conference, two NSW university students from Tharunka magazine were among the reporters. Paul Sleeman interviewed Jagger, chatted about instruments and music, showed him the new $1 bill (Australia had officially introduced decimal currency two days earlier) and talked about Prince Charles' stay at Timbertop school in Victoria. "They were delightful, just delightful," recalled Andrew Strauss, who accompanied Sleeman and took photographs. Later that day the band performed for a Bandstand special at TCN-9 studios. Songs performed were: I'm Moving On / Get Off Of My Cloud / Play With Fire / 19th Nervous Breakdown / As Tears Go By (with Jagger and Richards only) / Satisfaction. All songs were mimed to playback. Special aired on February 20. 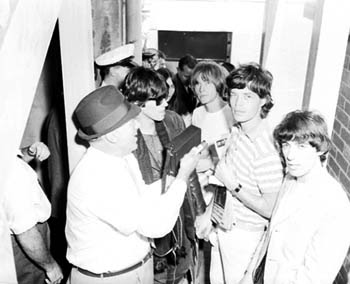 While in Melbourne Mick Jagger was given copies of the new Australian music magazine Go-Set, and he was reported to have been favorably impressed.
Mick is pictured left holding a copy of Go-Set while being interviewed at the 3UZ Radio Station.
The Stones played a total of six shows over 3 nights while in Melbourne (24th, 25th & 26th Feb), all held at the Palais Theatre in St.Kilda, and this post was taken from the 2nd show on the 24th Feburary).
.
In Adelaide, while relaxing around the hotel pool, the band had a memorable encounter with a young female fan who willingly revealed some extensive tattooing beneath her bikini bottom, including a red devil tattooed onto her lower mid area, which became a source of much amusement within the band in weeks to come.
Melbourne radio station 3UZ was located at the top of Bourke St, in the city's centre. The DJ's would interview rock stars on the roof overlooking the street, in this case Stan Rolfe was chosen to conduct the interview (see pictured right). Stone's fans flocked in such large numbers to see the band on this day, they they actually stopped traffic. 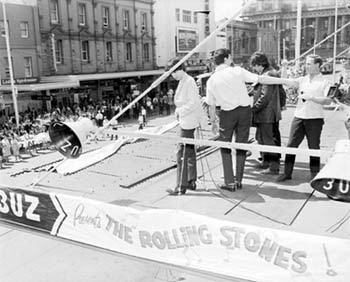 Mick was interviewed by Disc magazine on 26 February, and revealed that while in Australia the band "got stoned a couple times" and attended a party given by "some DJ" (possibly Ward 'Pally' Austin?) which Mick described as "a gas", and also mentioned that the group had to stay onstage at each performance until the police came to help them get away.
According to Bill Wyman's diaries, the tour grossed $59,136 for the Stones. Remarkably, the Stones' management team earned only slightly less than their clients -- UK agent Tito Burns received $5913, managers Allen Klein and Andrew Loog Oldham were paid $5321 and the the Stones earned $7063 each after expenses, although Wyman recorded that the band did not receive the payment at the time. The delay in payment is reputed to have been the reason why Keith Richards punched out Harry M. Miller when he met him at a club in London later that year.
After the tour Wyman and Jones headed to Los Angeles, while the other members holidayed briefly in Fiji. The group reconvened at RCA Studios in Hollywood in March for three days of recording with famed session player and arranger Jack Nitzsche. The tracks recorded included some of their very best from this period -- Lady Jane, Out Of Time, Paint It, Black, Stupid Girl and Under My Thumb. These songs, which represent for many the zenith of Brain Jones contributions to the band, were released on their next LP, Aftermath [extract from Milesago]
. 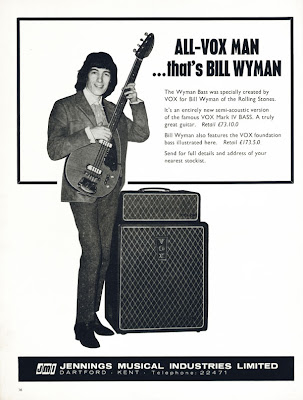 There was a remarkable postscript to the 1966 tour almost 40 years later. During the tour Bill Wyman played a semi-acoustic Vox V248 'Teardrop' bass. This distinctive instrument appeared in several Stones concert photos and film clips from 1965 and early 1966 -- including their Top of the Pops appearance on 3 February 1966, where they performed 19th Nervous Breakdown -- and it is also believed to be the bass that Bill played on Satisfaction.
Vox had a close relationship with both the Stones and The Beatles and both groups used Vox amplifiers extensively on tour and in the studio. The Stones were also noted for their frequent use of the distinctive Vox guitars and basses and Brian Jones was often photographed playing his famous trapezoid-shaped white Vox Phantom guitar. The V248 bass was the new semi-acoustic version of Vox's famous Mark IV (V224) solid-body teardrop bass. It was marketed as "The Wyman Bass" because Bill had agreed to endorse the new line, and the Wyman Bass was only Vox guitar to be inscribed with an endorser's name. On 5 February, just before the Far East tour, Jennings Musical Instruments (makers of Vox guitars and amps) gave Wyman a new Thomas organ as an advance payment for his endorsement. 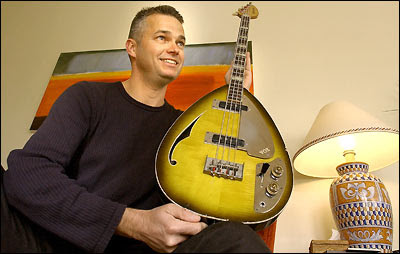 .
Unfortunately, Bill's Teardrop bass was stolen after their Wellington shows on 28 February. It remained in New Zealand and reportedly passed through a succession of 'owners' before being given to New Zealand musician Nick Sceats in the 1980s (see pictured above), in lieu of payment for a recording session. Sceats kept it for about fifteen years, but he was recently alerted to the possible Wyman connection. As a result, he contacted Bill through an internet fan site, and Wyman confirmed that it was indeed his long-lost Teardrop bass, and it was returned it to him shortly before Easter 2004.
.
The rip was taken from a Radio Broadcast and converted to mp3 at 320kps (sourced from Soundboard blogspot with thanks) and includes full album artwork and tour photos (sourced from Laurie Richards Collection, Museum of Performing Arts).
This bootleg has also been released under other titles - 'The Rolling Stones: Do You Like Billy Wyman' and 'The Rolling Stones: Do You Like The Rolling Stones'. Although the concert recording is fairly short (20mins), the quality of the recording is astounding for its era. There are also references made to the iconic Myer Melbourne Store during the commercial breaks which might give some additional 'satisfaction' to any historians out there !
.
Track Listing