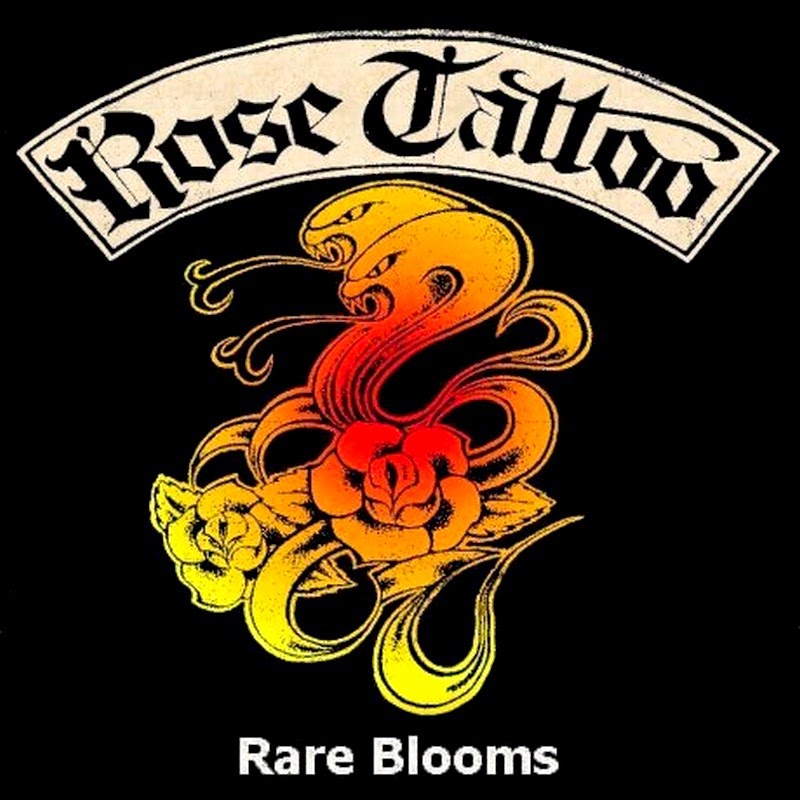 Rose Tattoo was formed in Sydney in 1976 with Leigh Johnston on rhythm guitar, Tony Lake on lead vocals and were led by slide guitarist Peter Wells—who had just departed as bass guitarist of heavy metal band Buffalo. Drummer Michael Vandersluys completed the line-up. Ian Rilen from Band of Light joined on bass guitar. He had taught himself to play while in prison and gave Wells' band the street-cred he was looking for. Rhythm guitarist Mick Cocks soon replaced Johnston; Lake and Vandersluys were substituted by former Buster Brown members Angry Anderson and Dallas "Digger" Royall respectively. Melbourne-based Buster Brown had enjoyed local notoriety, playing at the 1974 Sunbury Festival and had included future AC/DC drummer Phil Rudd. Rose Tattoo made their public debut on New Year's Eve at the rock club Chequers.
Chiefly inspired by The Rolling Stones, Faces and Billy Thorpe and his 1970s Aztecs, Rose Tattoo's hard-rocking sound quickly earned a devoted following in the Sydney area. Members of AC/DC were fans and recommended them to their label, Albert Productions. Their career simply took off from here.
. 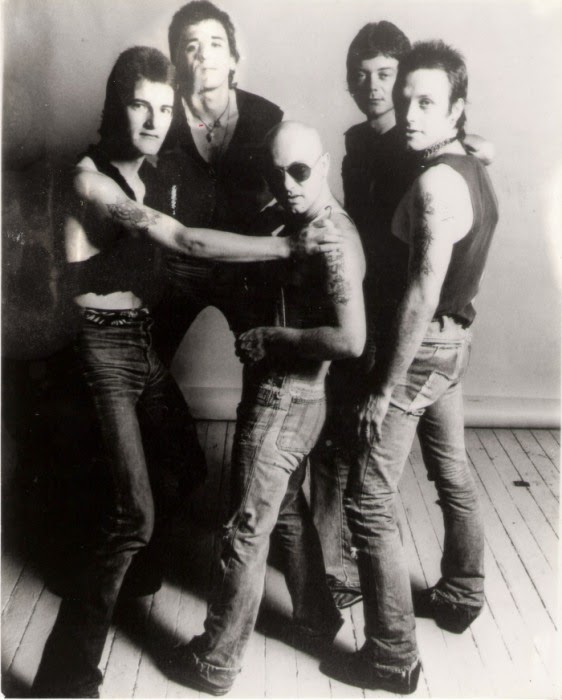 Rose Tattoo In The Media
When it came to the press, Rose Tattoo always made good copy, so writers were never short of fodder. Although he was living the wildest lifestyle, Angry had a social conscience even then. When rock writers came to talk to him, they'd ask him about the band, and he'd start talking to them about homelessness or street kids. Writers weren't interested, and it was a hard lesson for him to learn.
"After a few months of being newsworthy, magazines wanted to talk to us and photograph us, and you know, I was doing endless interviews," says Angry. "There's only so much you can say about the band, and then you've got to talk about other things. But basically, rock journos just want you to tell them that over the last month you were with so many women, took so many drugs, drank so much alcohol etc.
In other words, they want you to be what they think you are.
When I first started doing interviews, you know I loved the attention, but some of the best interviews I've ever done were cut down to about two paragraphs, and none of the issues were ever raised."
For writers, Rose Tattoo was the copy. Angry Anderson was the news. No one was interested in what he had to say about it. 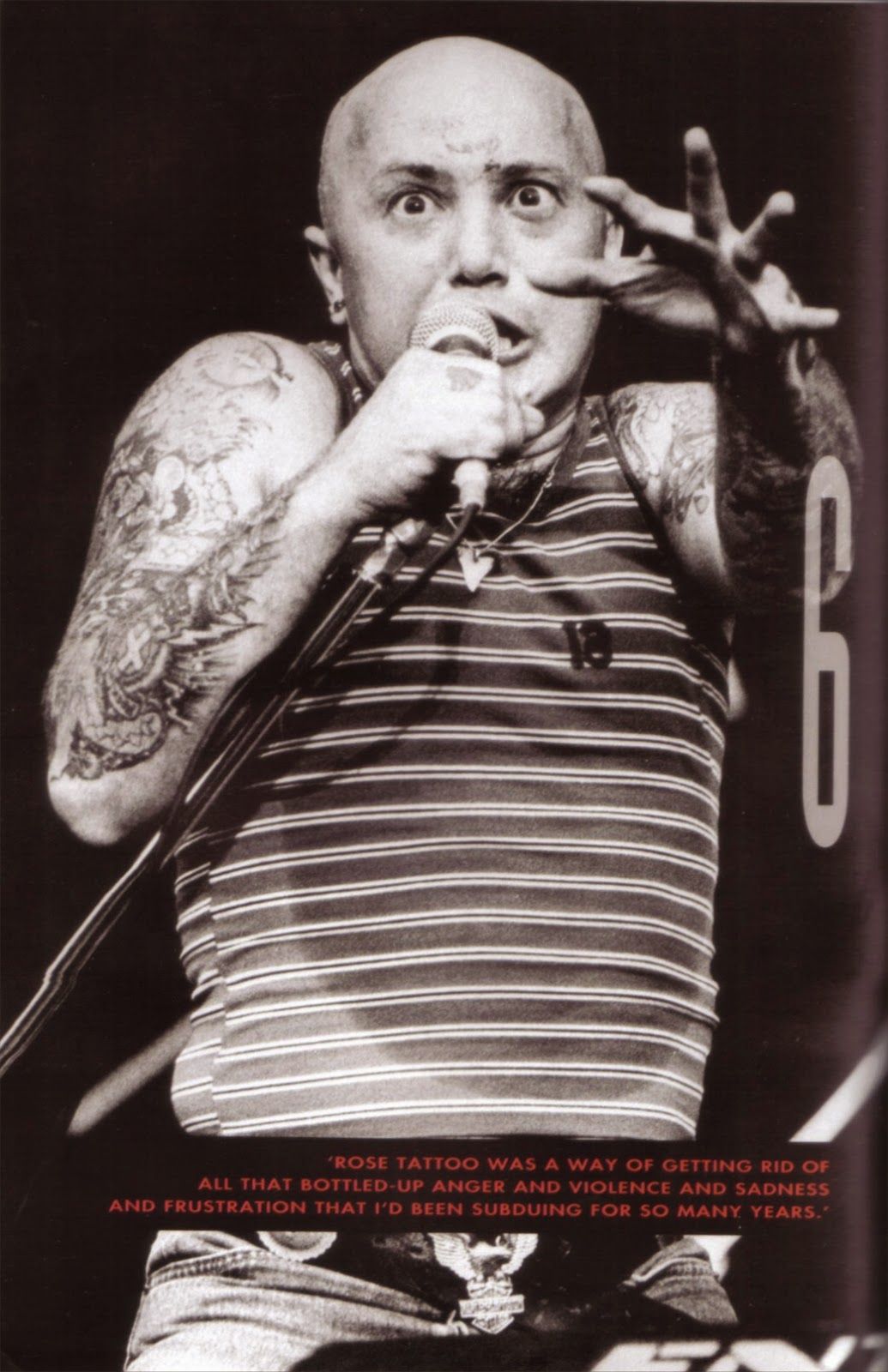 In the Rose Tattoo years, stories about Angry grew and grew. As he says, if he'd done only half the things of which he was accused, he'd have been a monster. At one time, a newspaper reported that he'd been charged with carnal knowledge, which simply wasn't true. The newspaper did print a retraction many months later, but it was hidden toward the back pages. It hardly made up for the headline which basically screamed that Angry Anderson had taken sexual advantage of a fourteen-year-old girl.
Many articles also talked about Angry as a person who'd spent long periods of time in prison, when in fact Angry s only experiences in prison cells were for eight or twelve hour spells, usually for being drunk and disorderly. There was one night in Perth where Angry was arrested for using offensive language on stage, and another time in Kempsey where he was arrested for assault, but he was never the longtime ex-crim that people talked about. As Angry says, "The things I'm supposed to have done are unbelievable. I could have been locked up for most of them. You know, people come up and still say 'I heard this about you', or 'I heard that about you', and you say 'No, that didn't happen'. They just look at you. They want to believe it, but they look at you and they're saying, 'I know you did you bastard.' Even though you're saying no, they're saying they know you did. It's damned if you do, and damned if you don't."
Angry copped most of the flak without too much complaint, but he did get frustrated with the stereotypes. 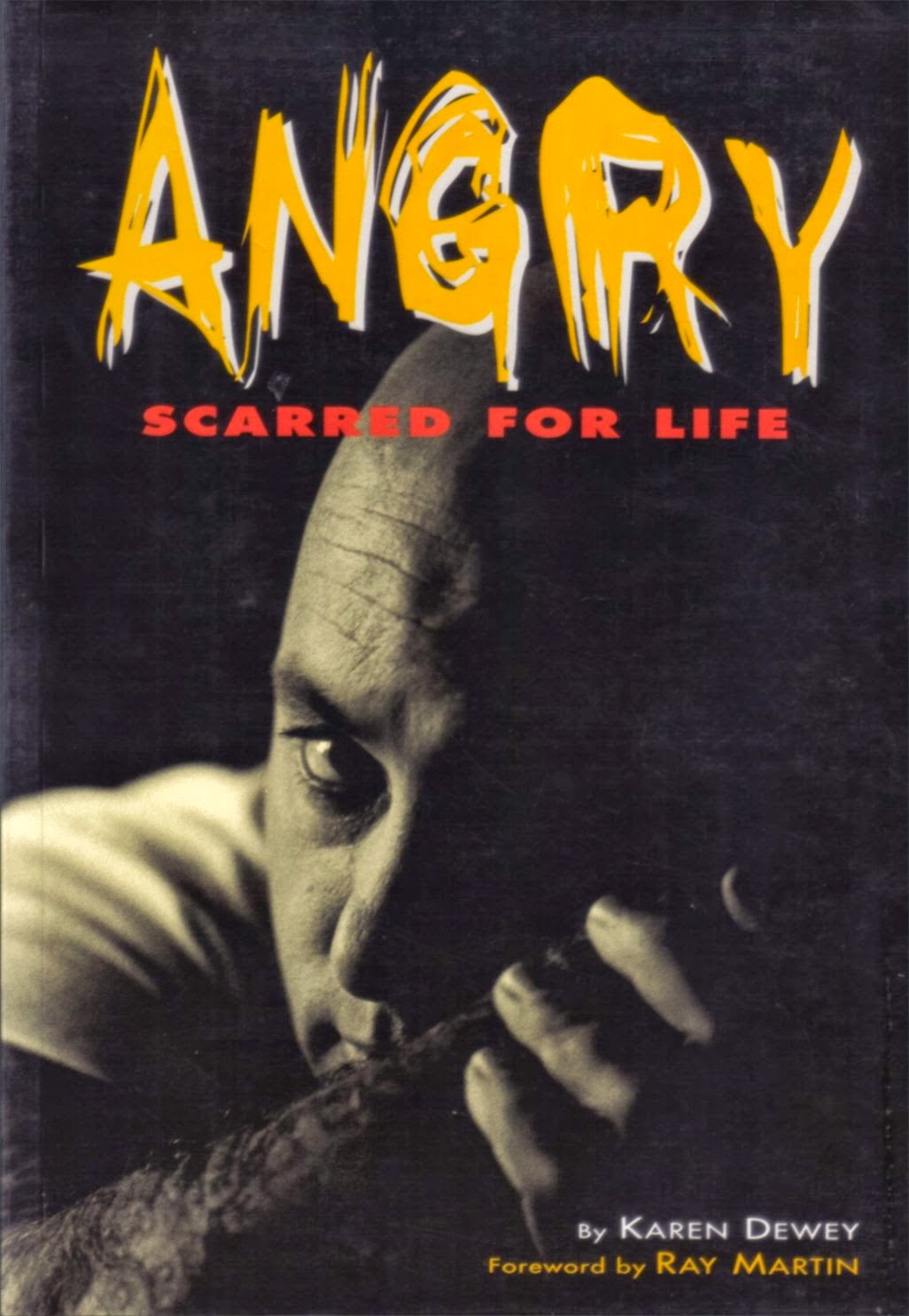 He didn't mind so much if someone met him, talked to him, and then decided he was a jerk, but he hated the articles that summed him up unfairly. Some writers would analyse him without ever meeting him, and others would arrive at the interview with such a definite preconceived idea of who Angry was, and of what he was about, that they may just as well have not turned up at all.
It was all part of being a rock and roller. There were just so many critics who weren't comfortable with Angry because he broke the mould. At one stage, a Juke Magazine article basically admitted the press was selling Angry short. The writer made what almost amounted to an apology: "The fifteen minutes allocated for the interview extended to a three hour yap session about everything from science and philosophy to the latest in porno movies. I left impressed with his courtesy and general knowledge, and somewhat sheepish that I'd dismissed him as a moronic jerk, simply for the way he looked."
Years later, when Angry s profile was big enough to earn him a complete feature article in Playboy magazine, the senior contributing editor Phil Jarratt made a similar observation. "There is no subject on which he will not offer a mouthful, and the work of the interviewer was essentially to keep him to one subject at a time. Although he looks like a midget wrestler, Angry is in fact a sensitive performer, a deep thinker, and a philosopher. [extract from Angry: Scarred For Life, by Karen Dewey. Ironbark Books, 1994. p98-100 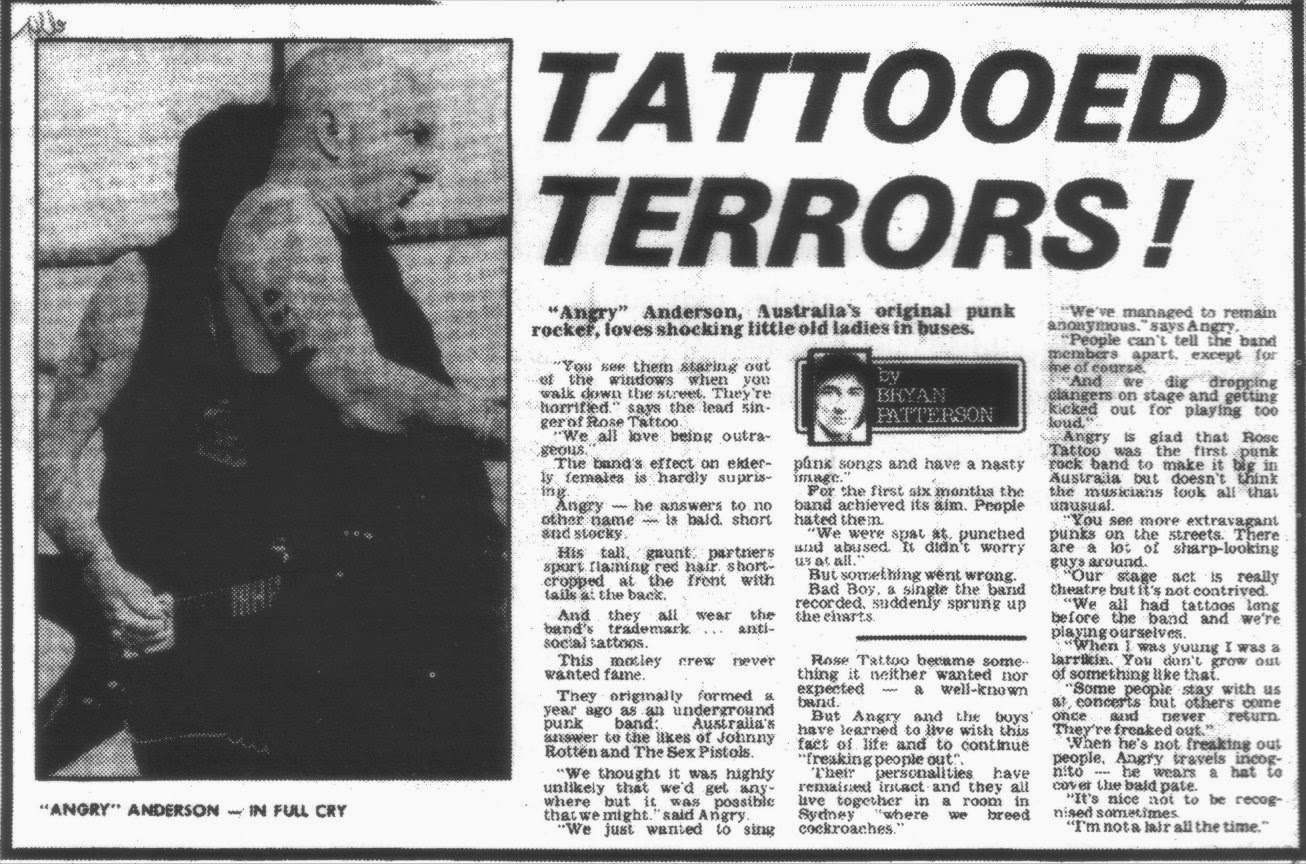 Tattooed Terrors
"Angry" Anderson, Australia's original punk rocker, loves shocking little old ladies on buses.
"You see them staring out of the windows when you walk down the street. They're horrified" says the lead singer of Rose tattoo.
"We all love being outrageous".
The band's effect on elderly females is hardly surprising.
Angry - he answers to no other name - is bald, short and stocky.
His tall, gaunt partners sport flaming red hair, short cropped at the front with tails at the back.
and they all wear the band's trademark....anti-social tattoos.
This motley crew never wanted fame. 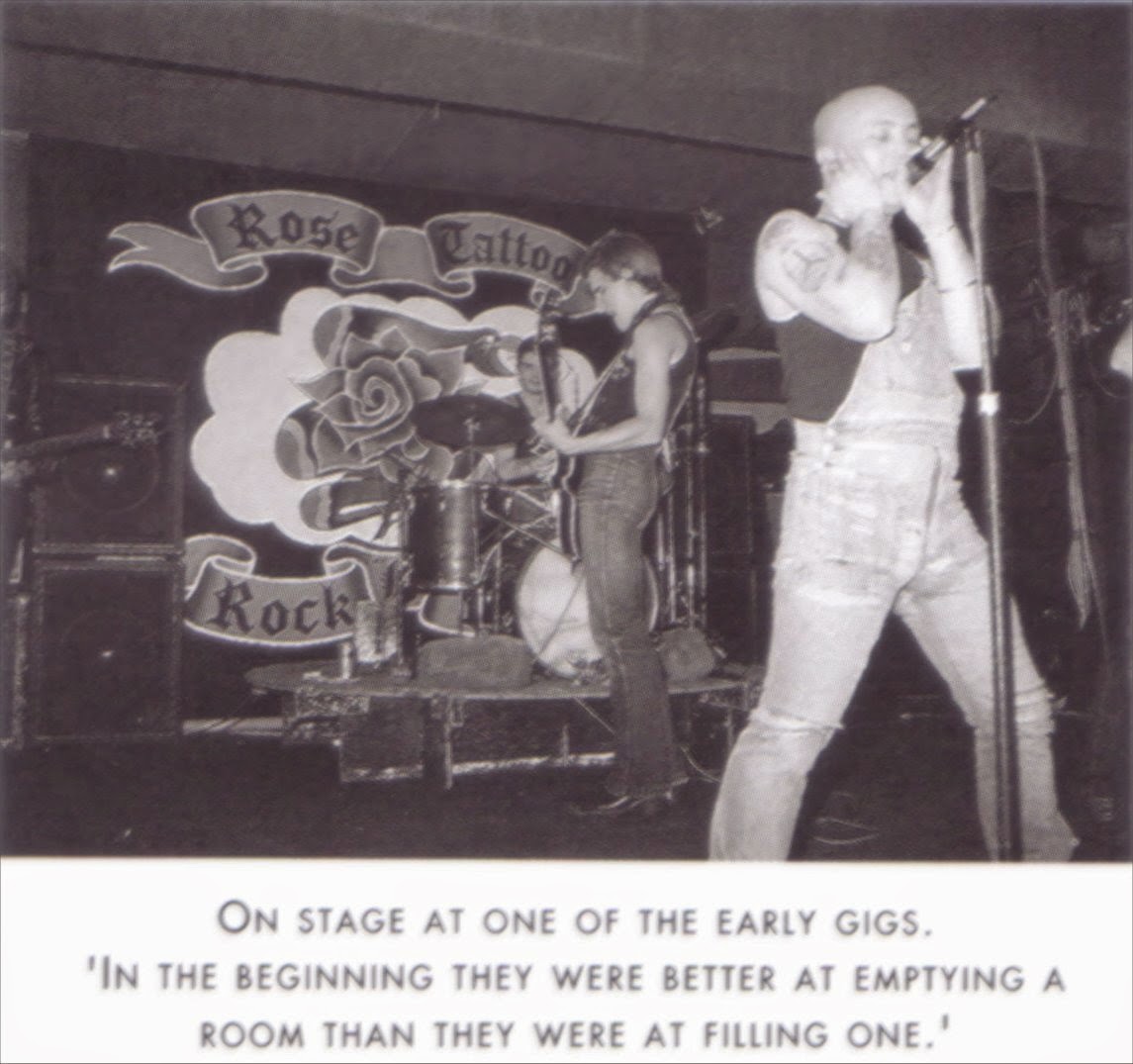 They originally formed a year ago as an underground punk band: Australia's answer to the likes of Johnny Rotten and The Sex Pistols.
"We thought it was highly unlikely that we'd get anywhere but it was possible that we might" said Angry.
"We just wanted to sing punk songs and have a nasty image".
For the first six months the band achieved its aim. People hated them.
"We were spat at, punched and abused. It didn't worry us at all". But something went wrong".
Bad Boy, a single the band recorded, suddenly sprung up the charts.
Rose tattoo became something it neither wanted nor expected - a well-known band. 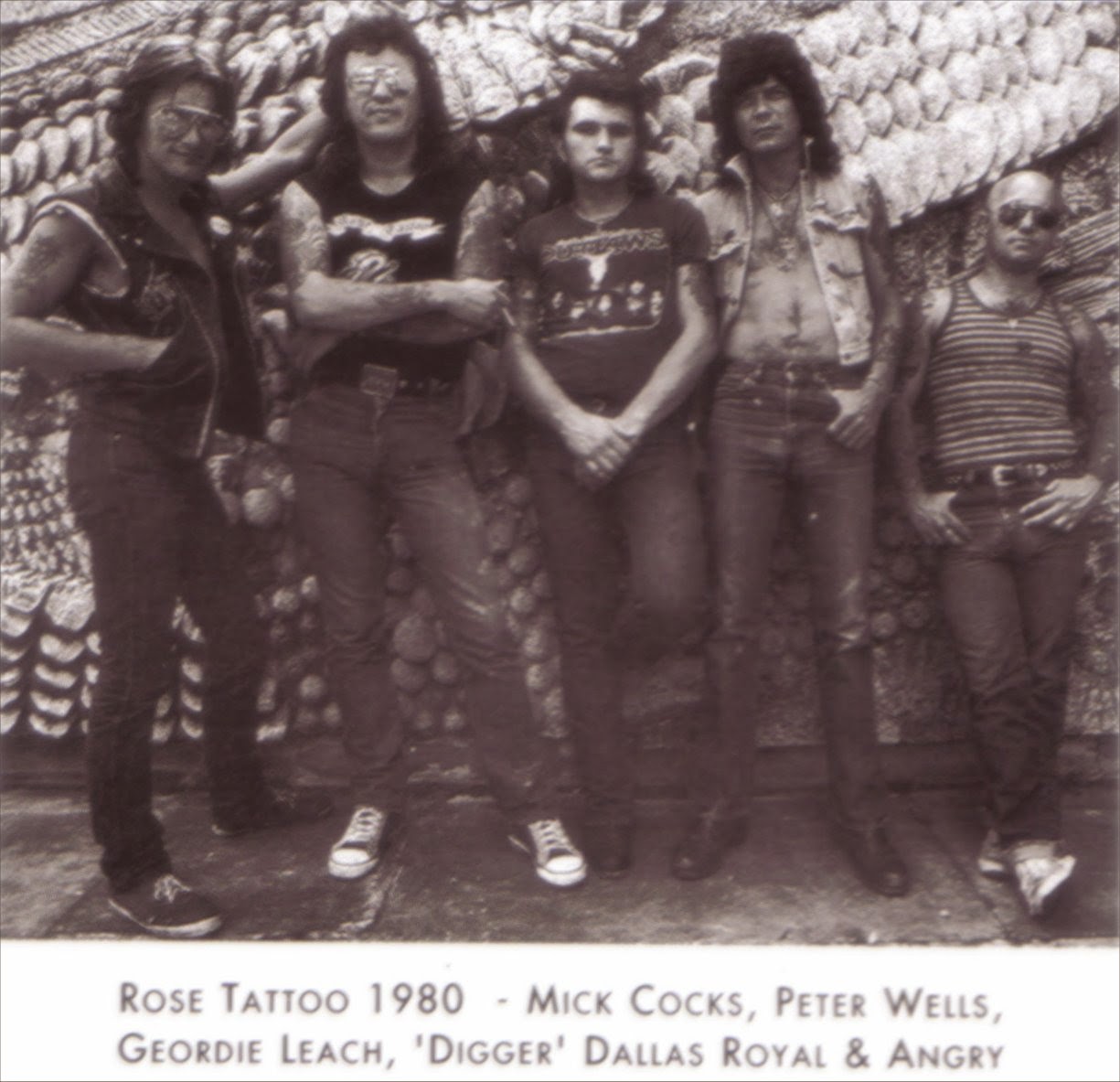 But Angry and the boys have learned to live with this fact of life and to continue "freaking people out"
Their personalities have remained intact and they all live together in a room in Sydney were we breed cockroaches".
We've managed to remain anonymous" says Angry.
"People can't tell the band members apart, except for me of course".
"And we dig dropping clangers on stage and getting kicked out for playing too loud".
Angry is glad that Rose tattoo was the first punk rock band to make it big in Australia but doesn't think the musicians look all that unusual.
"You see more extravagant punks on the streets. There are a lot of sharp-looking guys around."
"Our stage act is really theatre but it's not contrived."
"We all had tattoos long before the band and we're playing ourselves".
"When I was young I was a larrikin. You don't grow out of something like that."
"Some people stay with us at concerts but others come once and never return. They're freaked out."
When he's not freaking out people, Angry travels incognito - he wears a hat to cover the bald pate.
"It's nice not to be recognised sometimes".
"I'm not a lair all the time"   [Newspaper article by Bryan Patterson]
.
This post consists of MP3 (192kps) compilation taken from various sources (studio and live) and released as a Bootleg with full album artwork.  although the bit rate is not the greatest, the overall sound is pretty good - no distortion thankfully. This is a great anthology of the Tatts spanning over a 5 year period, and includes 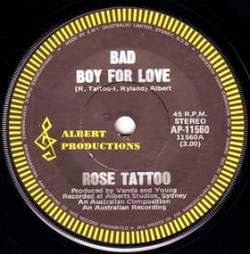 some of their best known hits such as "Bad Boy For Love", "Rock'n'Roll Outlaw" and "Snow Queen" to name but a few. So get out ya ol' denims, crank up ya amp and let the Tatts send a message to ya neighbours that you've had enough of their winging about ya loud music!
.
Track Listing
01. Bad Boy For Love (BBC Session)
02. Nice Boys (BBC Session) 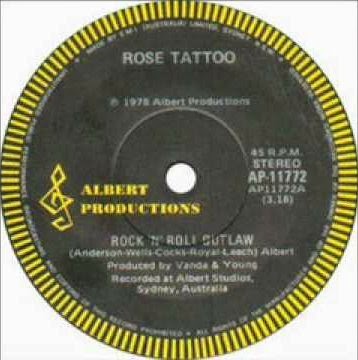 Posted by AussieRock at 8:56 PM