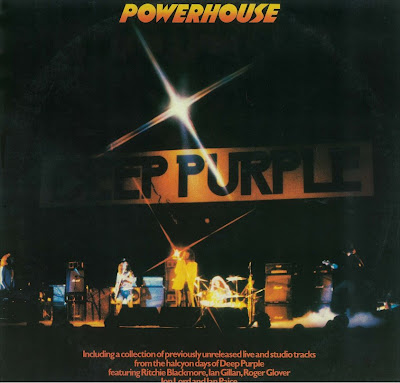 Deep Purple's 2nd incarnation (Mk 2) emerged from a low-key beginning to become one of the best and most successful rock bands of all time. Mk 2's breakthrough wasn't as overnight as that of Mk1, but had a much more lasting impact when it came. Mk 2 came about when Ian Gillan and Roger Glover joined the band in secrecy, with Nick Simper and Rod Evans exiting. Gillan exemplified the kind of powerful and vocally agile singer that the band sought to develop their harder rock sound. Glover came along at first on a session basis, but quickly impressed with his natural grasp of writing, and was snapped up to complete the new Deep Purple.
The first Mk 2 single, 'Hallelujah', was very much a Mk 1 throwback, and disappeared without trace (as had all Deep Purple's UK singles to that point). The line-up's first live gig was in front of a tiny audience at London's Speakeasy Club on July 10th. Inspired by their live chemistry, and with the quality of the music being written, the band gi 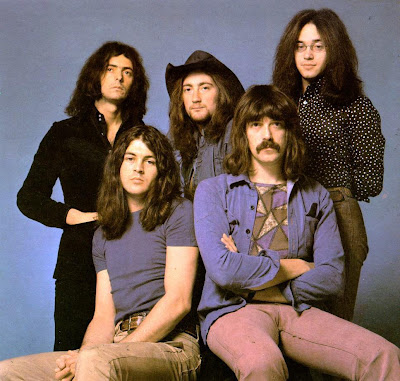 gged intensely in the UK and mainland Europe over the next 12 months, gaining an almighty live reputation. Their profile was also raised (if not in the way they all hoped for) by a performance of Jon Lord's rock / orchestral crossover 'Concerto For Group & Orchestra' at London's Albert Hall in September 1969, a piece that the rest of the band only came to appreciate in later years when it was no longer seen as a threat to their hard rock direction. A live album of the night was also their first top 30 UK chart entry, and the show was broadcast on BBC TV.
As a unit Mk 2 decided to pursue an uncompromising hard rock approach. Jon's Concerto sequel 'Gemini Suite' was allowed only one single band performance, in September 1970 (the live recording only seeing the light of day twenty years later). Ian Gillan sang on Lloyd-Webber and Rice's 'Jesus Christ Superstar' album but opted to remain gigg 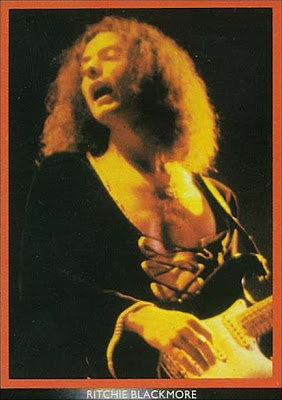 ing and recording with Deep Purple rather than appear in the movie.
The band's hard work paid off when their quintessential rock album 'In Rock' cracked the UK album charts open in June 1970, reaching #4 and staying in the top 30 for over a year. At the same time a jokey post-pub studio session resulted in 'Black Night', which became a major UK hit single. Newspapers now ran headlines like 'Purple Mania'. From late 1970 the once frequent profile raising TV and radio appearances were squeezed out of the band's itinerary as demand increased for them to tour and record. Their next two studio albums, 'Fireball' and 'Machine Head', were made under pressure-cooker conditions which nonetheless produced fantastic results; 'Fireball' the ultimate progressive rock album, and 'Machine Head' a hugely influential hard rock album packed with classics. Both went straight to #1 in the UK, helped by two more hit singles, while a relentless succession of tours that pushed the band global. The Japanese and US markets opened up, but the strain on the band's health and nerves increased. Something had to give.
In the middle of it all, three August 1972 Japanese shows 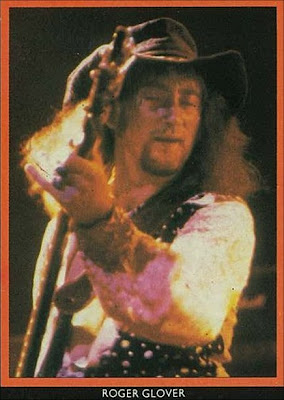 (fitted in between two US tours) were recorded. 'Made In Japan' was to set uniquely high standards for a live rock album. However, shortly after it was recorded, Ian Gillan handed in his resignation. 'To this day I don't know why...no-one said stay...no-one said shut up.' Despite the fact that his relationship with Ritchie Blackmore had been in silent stalemate after disagreements over the way forward, Gillan agreed to stay long enough to fulfill the remaining bookings. These included four more US tours, two UK tours and two European jaunts, stretching off over the horizon to a Japanese tour lined-up for late June 1973.
By early 1973 'Made In Japan' was becoming Deep Purple's biggest seller to date in the USA, and the hitherto almost ignored 'Machine Head' album track 'Smoke On The Water' was making an impact in their singles charts. Even though it did not reach the heights of its predecessors, the last Mk 2 studio release 'Who Do We Think We Are' appeared in March '73 and helped Deep Purple become the world's top 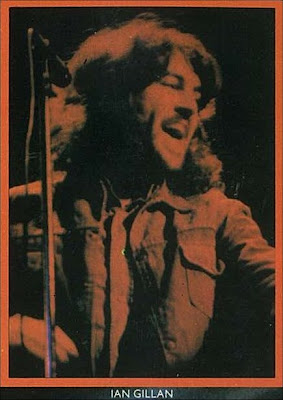 selling album act of 1973. The line-up was already effectively over by the time recording it was finished, Gillan adding bite to the lyrics by venting his spleen about the frustrations of his position.
Deep Purple's ever increasing success hid a sense of gloom back at their management's offices. It was a relief to all when Ritchie Blackmore agreed to stay on in the band. In return he was given free rein to put his vision into effect for a new Deep Purple, planning a unique duel vocal approach with Free's Paul Rodgers on lead vocals, and the extraordinary Glenn Hughes from Trapeze on bass and vocals. This meant that Roger Glover had to be squeezed out, a situation he gradually got wind of, leading him to resign along with Gillan rather than wait to be pushed.
Exhausted, Gillan and Glover stepped off the roller coaster on 29th June 1973 after a show in Osaka. It was over two years before either stepped on stage again. Ian Gillan eventually eased his way back into the business with the Ian Gillan Band in late 1975, Roger Glover agreed to join but pulled out after a TV date. Not until 1979 did he return to touring when Ritchie Blackmore recruited him into Rainbow. Even so, the feeling all around Deep Purple Mk 2 was one of unfinished business. Jon Lord described their break up as "the biggest shame in rock and roll, ever..." [extract from deep-purple.net]
. 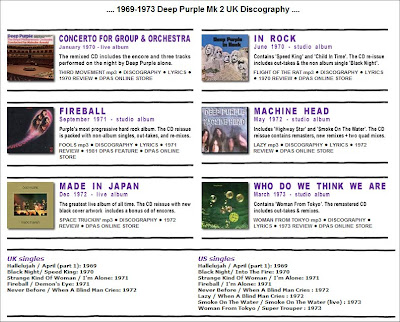 .
So why was MKII the best incarnation of Deep Purple?
Mk 2 was the best but I believe we have still a lot musically 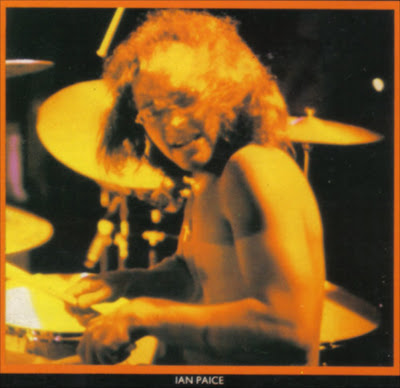 to benefit from songs like "Mistreated" in Mk 3 where the various tones and flavours of both the guitar and vocals are varied in both live and studio versions. It is nice to have them still going but I think Gillan's voice is over the hill now. Don't forget that 'Made in Japan' was made in 1972-3. Jon Lord had the good sense to call it a day before it became a comic act. I don't know why they didn't invite Ronnie James Dio to take over from Gillan, and as it turned out Blackmore got him first when he formed Rainbow.
I have every single album of theirs since they started and 'lyrics' were what made the band work together in rhythm. Otherwise they would have been just another jam band.
Blues and (progressive) Rock don't always mix, but Purple had the musical know-how 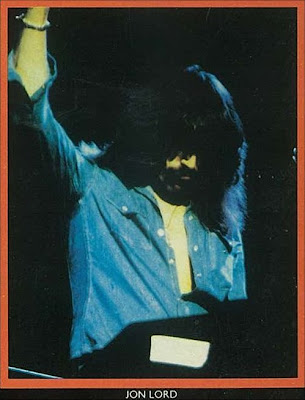 to classically bind them together. Some of the derivatives are jazz based but the overall tone is Rock-Blues because the songs are often about people places and situations. I would place Mk 3 and Burn at the top of the Blues list. But when the band were figuring out who they were they experimented no end with different beats, shorter or longer introductions to chorus beats which were outside the musical key they were playing in. This is what made Purple MK 2 the best because they experimented with everything.
.
Powerhouse Review
"Painted Horse" was recorded in Autumn 1972 for inclusion on the WHO DO WE THINK WE ARE album. Left unmixed because of internal conflict, it appears here for the first time. Subdued but interesting solo from Ritchie on guitar and lan Gillan's Lunch Wrapper (mouth organ!)
The next three numbers are all from a short set which preceded Jon's Concerto for Group and Orchestra 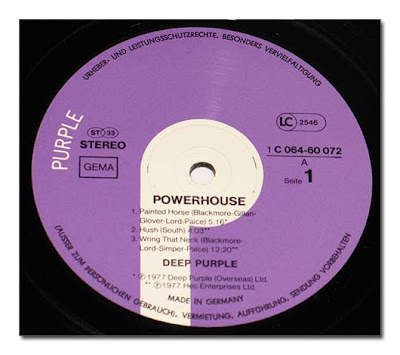 on 24th September 1969, and they give a unique glimpse into Deep Purple's first stage act. Probably nervous, and already worried about the way the press might (and did) - misconstrue the reasons behind the Concerto, they were nonetheless anxious to prove themselves in their own rights. Gillan's vocals give "Hush" a new dimension (listen for evidence of his early passion for Elvis) and the Albert Hall acoustics give Jon's Hammond a superb atmospheric sound.
"Wring That Neck" was an integral part of the show until I971, an instrumental for Jon and Ritchie, whose wonderful finger vibrato is captured at last.These older numbers were eased out as new material was written and recorded. 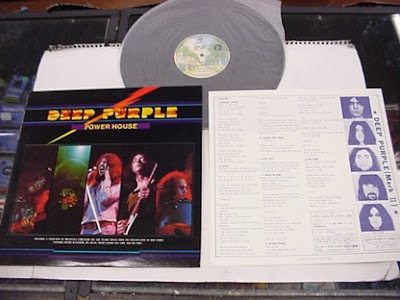 "Child In Time" was one such new number, the live version closely follows the original studio recording, which had only been laid down a few days before. Gillan puts his heart and soul into the vocals, and Ritchie concentrates hard to pull off a classic solo. The stunned audience remain silent as the final notes echo around the hall, before they burst into applause.
"Black Knight", recorded at the same time as the historic MADE IN JAPAN live double album but not included therein, was performed as an encore during August 1972 in Tokyo and only previously included on the 24 CARAT PURPLE album.
"Cry Free" closes the album. A rather lovely Gillan lyric over a hard Purple riff, with an unusual phased guitar solo from Ritchie. Possibly a projected single, this was one of a number of items recorded during sessions for the immortal IN ROCK album - 'Classic Tracks From The Classic Band' [Linear notes on album cover]
.
Rip was taken from my mint condition vinyl print at 320kps and includes full LP and CD scans. At the time of its release, this album was considered to contain many rare recordings - unavailable elsewhere. From a collection point of view, this is a must in any Purple Collection.
.
Track Listing
01 - Painted Horse (5:19)
02 - Hush - live (Joe South) (4:37)
03 - Wring That Neck - Live (Blackmore, Lord, Paice, Simper) (12:51)
04 - Child In Time - Live - 12:29
05 - Black Night - Live (4:59)
06 - Cry Free (3:11)
.
Track 1: Leftover track from the 'Who Do We Think We Are' 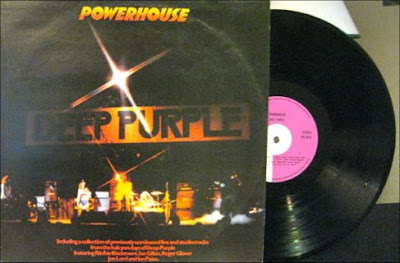