Some time ago, I purchased a compilation CD of Progressive Rock called 'Classic Rock' and came across this bizzare and very Weird track by a group called Mammoth. On further investigation, it turns out that this UK band only played together between 1987 and 1989, playing mostly 'heavy metal'.
However, the track in question 'White Mammoth On The M1' is far removed from heavy metal and sounds like the soundtrack for a Sci Fi movie with a music score produced by Yoko Ono - very Avante Garde! As the track title implies, the music is representative of what a large Wooly Mammoth might sound like (and hear) if it was slowly walking along a freeway (M1) in the middle of the night. Beyond this, it is too hard to describe what this track sounds like, so why not download it and have a listen yourself.
. 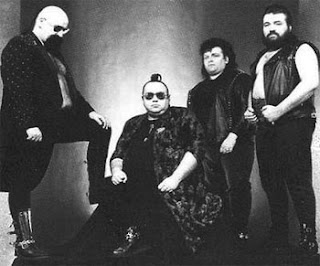 MAMMOTH were a truly larger than life rock outfit led by a 'mountain man' vocalist Nicky Moore and big bald bearded bassist John McCoy famed for his former years in chart topping Ian Gillan. The band lasted from late 1986 to the end of 1989 but only released two albums.
John McCoy is a British bass guitarist who is best known for his work with Ian Gillan and Mammoth as well as numerous other bands and sessions since the late 1960s.
Post-Gillan, John McCoy recruited session drummer Vinnie "Tubby" Reed, guitarist "Big" Mac Baker and vocalist Nicky Moore to form a band initially called Dinosaur. The name was already in use by a Californian band, so McCoy renamed his new outfit Mammoth. The name was also a tongue-in-cheek reference to the large size of the band members: McCoy weighed 120 kg, Reed 140 kg, Baker 152 kg and Moore 127 kg. 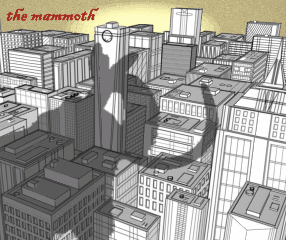 The band toured with Whitesnake and Marillion and were well-received by fans. They released one single, "Fatman", and two albums, Mammoth and XXXL. In 1988 the entire band appeared in the film Just Ask For Diamond, playing the henchmen. Musically, commercial success eluded them however and the band eventually split in 1989, with McCoy becoming an independent producer. As the band's nostalgic popularity increased in later years, the few records that were released became collector's items - vinyl copies of the album trading hands for as much as $120.
.
I have included some choice photos of the band and their wooly mascot, along with a 320kps rip from CD of 'White Mammoth On The M1', for this W.O.C.K on vinyl posting..

Posted by AussieRock at 9:56 PM